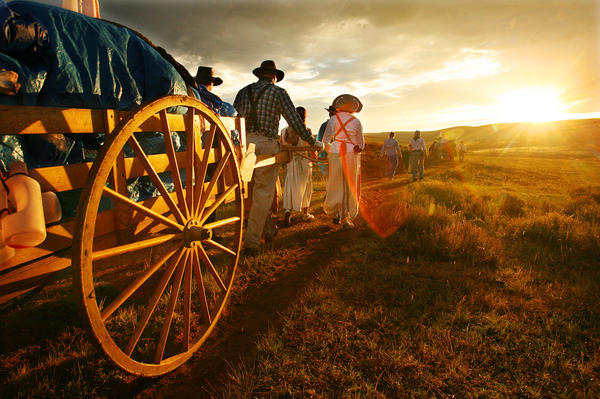 MR says: Find out what famous western author Wallace Stegner has to say about the character and tenacity of LDS women.

The consummate author of the Western experience, Wallace Stegner, penned "The Gathering of Zion: The Story of the Mormon Trail." He was quite enamored by the “suffering, endurance, discipline, faith, brotherly and sisterly charity” he discerned from the diaries, letters and reminiscences of the early Mormon pioneers. In his introduction for the book, which was published by the University of Nebraska in 1981, he also notes their “human cussedness, vengefulness, masochism, backbiting, violence, ignorance, selfishness, and gullibility.”

Yet he cannot find enough superlatives at the conclusion of his prologue where he writes, “That I do not accept the faith that possessed them does not mean I doubt their frequent devotion and heroism in its service. Especially their women. Their women were incredible.”

Stegner’s words are a powerful reminder of the often quiet yet critical role women played in the Mormon westward crossing. I would even venture to say that the trail experience and, in this instance, the settling of Utah would have been impossible without the contributions of women of The Church of Jesus Christ of Latter-day Saints.

A few of the experiences of these early Mormon women pioneers give us a taste of their pluck — their spirited and determined courage — and their gritty tenacity. And perhaps the best place to start is understanding what inspired these women to their task.