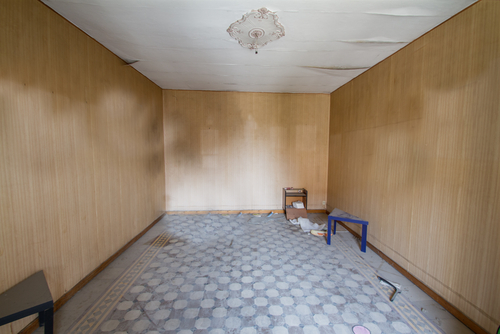 One of my clearest childhood memories is of going with my father to inspect a home he had leased to a family. I think I was around 9 or 10 years old. My parents had purchased the home to bring in a little extra money for their family of nine. The renters had moved out after living there for several years, and Dad and I were going to get the place ready for new renters. My dad was good at home repairs and maintenance, so he spent a lot of time taking care of the property. He sometimes brought me along to help.

I’ll never forget what I saw when we walked into the home that day. It was a disaster! I can still see it all these years later: trash everywhere, stained carpets and floors, filthy bathrooms. The walls even had holes and scribblings on them. I grew up in a home of seven children, so I was familiar with untidiness, but I had never seen anything like this! What made it worse, in my mind, was the fact that my father, out of the goodness of his heart, had let the family live there at a reduced rate.

Dad quietly assessed the mess, made note of what needed to be done, and started to work. My adolescent anger boiled—both at the family and at my dad. “Why don’t you go after them?” I demanded in exasperation. “You know where they’ve moved. Go after them. Make them pay for all this!”

My father was quiet as he walked around the home and listened to my rant. Then calmly he said, “They knew better than this. They had agreed to take care of it and clean it. But maybe something has happened in their family. I’m not going to let them ruin my day.”

I was stunned. I was mad. They already had ruined his day—not to mention mine. Now we had to spend our own time and money making repairs that weren’t our fault. This wasn’t fair. I wanted justice. I wanted an eye for an eye, a tooth for a tooth. I wanted to call the police. Or, better yet, to go find these people and trash their new home and show them what it felt like. Something! But my father just calmly set to work.

Now that I’ve gained a few years and a little more experience and wisdom, now that I’ve worked at becoming a better man, my father’s words ring in my ears with a little more clarity: “I’m not going to let them ruin my day.” He wasn’t referring to home repairs and cleaning. What would have ruined the day for him was the anger, the indignant, vengeful attitude. I am amazed at his strength of character, his equanimity, his self-control. All these years later, I’m embarrassed at my childish fuming.

My father was a strong man who had a goodness about him that radiated to others. He passed away more than 30 years ago, but my six siblings and I would never think of him as weak or wimpy or afraid. He worked in a steel mill and was somehow able to preserve a gentle spirit in that rough environment. He trusted the Lord and never wavered through all the ups and downs and challenges of life. He knew who he was, and he was not weak in any way. But he was meek.

When I think of the virtue of meekness, I think of two people: the Savior Jesus Christ and my father. Truly, I was blessed to be reared in a home with a father who was meek.

Meek and Lowly in Heart

So what does it mean to be meek? Consider this example from the Savior—one of the sweetest and most powerful moments of His ministry. The setting is the Last Supper, a private gathering of Jesus’ closest associates, just hours before He gave His life as a sacrifice to save mankind:

“He riseth from supper, and laid aside his garments; and took a towel, and girded himself. After that he poureth water into a basin, and began to wash the disciples’ feet, and to wipe them with the towel wherewith he was girded” (John 13:4–5).

The disciples must have been astounded. Their Lord and Master, the man whom they worshipped as the Son of God, was kneeling before them, performing a service that, in their minds, belonged to lowly servants. Perhaps sensing their amazement, Jesus asked:

“Know ye what I have done to you? Ye call me Master and Lord: and ye say well; for so I am. If I then, your Lord and Master, have washed your feet; ye also ought to wash one another’s feet. For I have given you an example, that ye should do as I have done to you” (John 13:12–15).

This simple model speaks volumes about what it means to be meek. Meekness is not fear or cowering. Jesus was meek not because He was intimidated or powerless. Meekness, rather, is great power—used gently, quietly, and humbly in the service of others.

That’s so different from the way the world views and uses power; perhaps that is why meekness is such an underappreciated virtue and such a misunderstood principle. As the Master taught His disciples when they were found arguing about position and prominence: “Ye know that the princes of the Gentiles exercise dominion over them, and they that are great exercise authority upon them. But it shall not be so among you: but whosoever will be great among you, let him be your minister; And whosoever will be chief among you, let him be your servant” (Matthew 20:25–27).

Alma the Younger is one who learned this lesson about meekness. During his rebellious days, he was known as “a man of many words” who had a powerful influence over the opinions and actions of others. Unfortunately, he used his skills and influence to lead “many of the people to do after the manner of his iniquities” (Mosiah 27:8).

After his conversion, Alma’s heart changed, and so did the spirit of his efforts. He was still a man of many words—a good portion of the words in the Book of Mormon are Alma’s—and he still had a powerful influence on others. But now he used this power not to destroy the Church but to “impart much consolation to the church, confirming their faith, and exhorting them with long-suffering and much travail” (verse 33). Instead of popularity, he faced “much tribulation, being greatly persecuted,” all for the sake of being an instrument “in the hands of God in bringing many to . . . the knowledge of their Redeemer” (verses 32, 36). In doing so, Alma received greater power from God than he’d ever had on his own, but he always used it according to the will of the Lord, in His service (see, for example, Alma 14:10–11, 14–29). In short, Alma learned how to be meek.

Meekness changes hearts and homes. Imagine how the virtue of meekness would bless and strengthen a marriage and family, and all our relationships. Consider the spiritual power in a home that is filled with a spirit of meekness, gentleness, and kindness. And think how becoming meeker will give you greater power, confidence, and peace.

Blessed Are the Meek

Perhaps what gives meekness its particular spiritual power is the influence it has on our hearts. Meekness changes us. Like a plow that loosens thick earth in preparation for planting, meekness prepares us to acquire the other attributes of Christ. Meekness allows us to be teachable. It breaks down the walls of stubbornness and pride that prevent us from progressing. Meekness is not simply a nice quality to have; it is critical to our salvation and exaltation. In fact, Mormon taught that a man “cannot have faith and hope, save he shall be meek, and lowly of heart,” and he added that without such attributes, “faith and hope is vain, for none is acceptable before God, save the meek and lowly in heart” (Moroni 7:43–44).

The meek have a desire for righteousness despite the carnal susceptibilities and allurements all around us in this fallen world. At the center of meekness is gratefulness and thanksgiving, seeing blessings and miracles all around us as we acknowledge the source of those blessings. This is why missionaries write home every week about the constant flow of miracles in their work. In their meekness, their eyes and hearts are attuned to the Lord’s handiwork.

Meekness comes of knowing that anything we do well is a gift from God. Perhaps therein lies the truth of this statement by the Savior, who was known for both His meekness and His power: “Blessed are the meek: for they shall inherit the earth” (Matthew 5:5).

The meek are willing to believe without demanding further information or explanation from the Lord. Their attitude is like Nephi’s: “I know that [God] loveth his children; nevertheless, I do not know the meaning of all things” (1 Nephi 11:17). The meek “trust in the Lord with all [their] heart; and lean not unto [their] own understanding. In all . . . ways [they] acknowledge him, and he shall direct [their] paths” (Proverbs 3:5–6).

As the meek suffer harm and wrongdoing—for life is full of offense, even for those who strive to give none—they choose not to harbor resentment or nurture wounds. The meek choose to move on and move forward. Their love in response to bitterness and anger creates ever-widening circles of kindness and compassion. They have the moral strength to return no evil for evil, to be considerate in the presence of cruelty, and to be gentle in the presence of harshness.

That’s the quiet power that comes of meekness. The meek are at peace; they seem to be able to endure harsh words, incivility, and unfairness. The meek do not seek to retaliate—they seek to understand and to heal. Elder Bruce R. McConkie further explained:

“The meek are the god fearing and the righteous. They are the ones who willingly conform to the gospel standards, thus submitting their wills to the will of the Lord. They are not the fearful, the spiritless, the timid. Rather, the most forceful, dynamic personality who ever lived—He who drove the money changers from the temple . . . said of Himself, ‘I am meek and lowly in heart.’”

Read more from Don Staheli and Lloyd Newell in their newest book, Habits of Holy Men, available at Deseret Book stores and deseretbook.com.

Makes You Think Meekness Example FathersMeekness,Example,Fathers,Makes You Think
Comments and feedback can be sent to feedback@ldsliving.com