Latter-day Saint Mark Henshaw never anticipated writing a religious book. For 15 years, the security analyst, military historian, and author had been writing well-reviewed espionage thriller novels that follow CIA agents in their chase to secure American safety. He had never imagined that writing stories of spies and secret missions was actually training for a special, spiritual project down the road.

Fast forward, and this summer Henshaw has published the narrative history, Forty Years: The Saga of Building the Salt Lake Temple, through Deseret Book. But what spurred Henshaw to make a career departure that took him from writing spooky stories to crafting a spiritual book? Here’s how this writer’s journey has changed the way he thinks about the Salt Lake Temple and what he hopes readers will gain as they read.

The idea to write a narrative history began when Henshaw was faced with some disappointment. Previously, he published a series of four fiction books through Simon & Schuster: Red Cell, Cold Shot, The Fall of Moscow Station, and The Last Man in Tehran, relating the exciting adventures of two fictional CIA agents who save America from various threats. However, while the books had been well-reviewed, they didn’t hit the bestsellers list and the series was ultimately discontinued.

“I think it was one of those cases where the Lord lets a door close so you can be guided to go through another one. With no fiction book commitment in front of me, I was able to start looking around. . . and start receiving impressions on what else I could be doing,” says Henshaw. 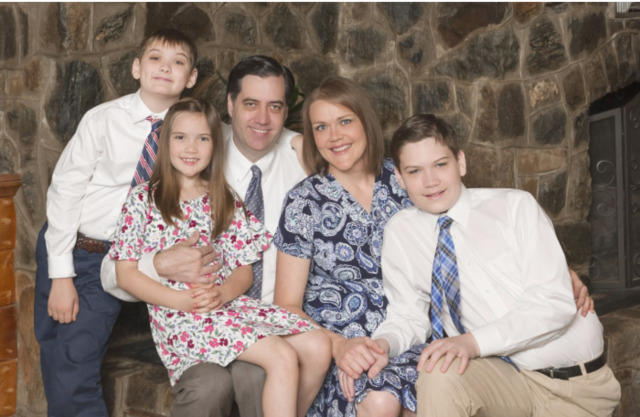 In the midst of Henshaw’s pondering over what to write next, he again received disappointing news: the temple closest to his home—the Washington D.C. Temple—would be closed for extensive renovation for at least two years beginning in March of 2018. Temple attendance suddenly became more difficult as he and his family would now have to travel over three hours to attend the Philadelphia Pennsylvania Temple.

As disappointing as these two pieces of news may have been, together they led to an idea that would test Henshaw’s storytelling abilities and ultimately change his perspective on temples forever.

“I was sitting there fretting over these changes a little bit, and I started thinking back in time about early Church history. I had read stories about how they had built the Kirtland Temple and the Nauvoo Temple,” says Henshaw. “After they spent years building those temples, they never got to use them very long until they were driven out by mobs and they lost them. And then [I] thought, ‘You know, I don’t think Brigham Young would be very sympathetic to me complaining about having to sit in an air-conditioned car for three hours listening to audiobooks to attend the temple,’” says Henshaw.

The early Saints’ sacrifice to build and attend temples would not leave Henshaw’s mind. He specifically began to realize that he, like many Latter-day Saints, knew little about what it took to build the Salt Lake Temple, and why exactly it took 40 years to build.

During this time, Henshaw also happened to be reading a book about the construction of the Brooklyn Bridge by David McCullough, who also authored the book 1776.

“I hadn’t realized before that that you could write a narrative history that was about a building. I’d always thought of them [being] about battles or about people, but not about a building. But once I was going through that book, I realized, ‘Oh this can be a really engaging story,’” says Henshaw.

With that realization, Henshaw began looking for a narrative history about the construction of the Salt Lake Temple. But he ran into a problem: there wasn’t one. He found long, academic histories, but no narrative story that would bring the history to life like McCullough’s books did.

And that’s when the idea sparked to life: Henshaw wondered if he could write the narrative history of the Salt Lake Temple he hadn’t been able to find. After making a few calls, Henshaw began planning, researching, and writing his book, which eventually became 40 Years: The Saga of Building the Salt Lake Temple.

“It was interesting how much of the past training I’ve had academically and also in writing fiction novels was able to come together so that I could write this book as a historically accurate narrative, but hopefully one [that] people will find interesting and engaging,” says Henshaw.

A history to pull us heavenward

As Henshaw dedicated himself to research and writing, he was astonished at the physical and logistical prowess that went into constructing the Salt Lake Temple.

“The fact that it took 40 years to build it first of all ought to tell us something,” says Henshaw. “They [the early Saints] had to cut every stone in that building by hand using hammers, chisels, and wedges. They had to haul the majority of them in the early years using wagons and ox carts and raw muscle. It wasn’t until the railroad came along that that changed, but even then, they had to go and build miles and miles and miles of railroad track.”

Henshaw also learned that the early Saints faced not only physical limitations—there were also political challenges that affected the temple’s construction.

“The Saints were facing the United States government coming out here and being, in some cases, just radically opposed to the existence of the Church. There were politicians who were explicitly calling for the Church to just be snuffed out of existence,” explains Henshaw.

The Saints faced Johnson’s army coming to invade, the ripple effects of the American Civil War, the campaign of the United States Government to “snuff out” plural marriage, and Church leaders who had to remain in hiding for practicing their religious beliefs for years—including President John Taylor.

“Even though some of them never lived to see it finished, they still gave it everything that they had,” says Henshaw. “It is amazing to me that they could be so dedicated to that and appreciate the blessing of [what] it was going to be . . . or appreciate that, ‘Maybe if I don’t live to see it, my children will, and they will get those blessings.’”

Over time, Henshaw discovered that perhaps the real reason the Lord wanted this history written was not only to bring admiration for what those early Saints endured, but also to increase admiration for the Lord and His blessing of temples.

“It is my hope that this history will help readers come to appreciate the magnitude of the challenges those early Saints faced to build the Salt Lake Temple, and thus the depth and intensity of the faith required to overcome those obstacles. Understanding that, I believe, will help us properly value the worth of temples,” Henshaw wrote in the preface to his book.

Church historian Jacob W. Olmstead, PhD, aided Henshaw in his search for stories and details about the temple’s construction. He, too, came to realize that the construction of the temple, to Saints then and now, is about far more than clever engineering.

The next four years provide a unique time for Latter-day Saints to let the Salt Lake Temple’s history pull their gazes heavenward. In April 2019, President Russell M. Nelson announced that the temple would be closed for four years to undergo significant renovation. President Nelson invited members to let the temple’s renovations prompt retrospection in their own lives.

“As we speak of our temples old and new, may each of us signify by our actions that we are true disciples of the Lord Jesus Christ,” President Nelson said. “May we renovate our lives through our faith and trust in Him.” 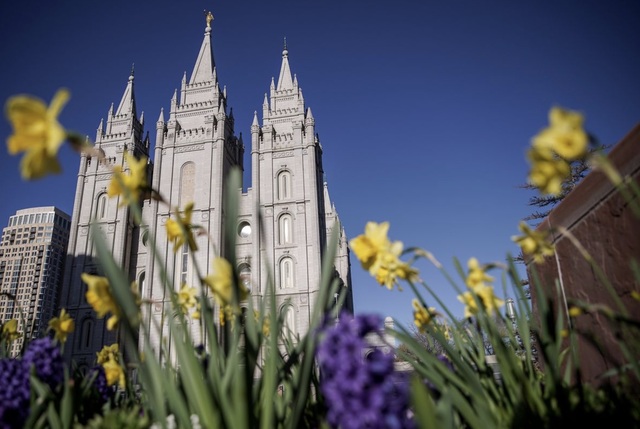 When the Salt Lake Temple renovations are complete, members and nonmembers alike will be invited to tour the building. Henshaw, who lives in Virginia, says he is ready to “move heaven and earth” to come to Salt Lake City to attend the open house. He is thrilled at the thought of touring the temple with the stories he learned of the early Saints’ sacrifice ringing in his ears. Through his book, he invites all Latter-day Saints to heighten their own appreciation for temples.

“I know that when I was done writing this book, I saw the Salt Lake Temple in a new light. I can’t look at a picture of the temple without thinking about all the things I learned while writing that book,” says Henshaw.

For Henshaw, the “sweetest moment” in the history he covered comes at the end of the book. The temple was finally completed, and the month-long dedication services were going on.

“Wilford Woodruff and a lot of the old timers of the Church, those that had been around in the early days with Joseph in Kirtland, met in the Assembly Hall at the top of the Salt Lake Temple, and they had a special testimony meeting where they sat around talking about the old days. And it is a bunch of [elderly] people [reflecting on]. . . this magnificent building that they just spent 40 years of their lives building, and they’re remembering the past and where they came from and everything they have overcome to get to this point. And if I could go back in time, I would love to be in that meeting and just listen to what those people had to say,” says Henshaw.

While we don’t know for sure what those early Church leaders talked about in the Assembly Hall that day, one can imagine there were expressions of love and appreciation for the Lord and the blessings of the temple.

Latter-day Saints today will have to wait over three years before they can enter the Salt Lake Temple again. And in the midst of the coronavirus pandemic, most members are unable to attend temples at all. Now can be a special time for modern Latter-day Saints to increase their appreciation for temples in ways other than attendance. Looking to the example of early Saints can be a great way to start.

“It’s just an amazing thing to see how those people sweat and bled for that building. And the blessings they could get from it are the same blessing we could get from the temples we have today. [They’re] the exact same blessings. We don’t have to go through what they went through, but we should value those blessings the same as they did,” says Henshaw. “I think reading about what they went through can help us look at the D.C. temple, or the Philadelphia temple, or [the] Provo City Center Temple and say, ‘That [building] is every bit as valuable to us. That building is every bit as important as the Salt Lake Temple is.’ It’s no different, and the blessings that we get there are the same, and we should hold them as valuable to us, no matter which temple it is, as [the early Saints] did [with] the Salt Lake Temple.”

40 Years: The Saga of Building the Salt Lake Temple is available now at Deseret Book. 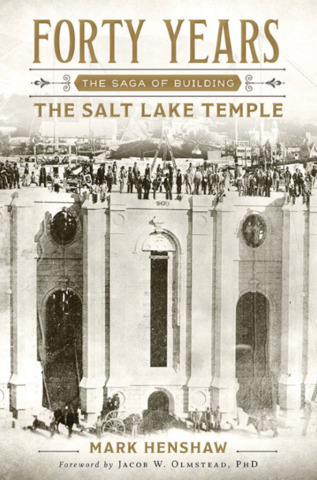 From the chilly February day in 1853 when the prophet Brigham Young drove a shovel into the soil to break ground for the Salt Lake Temple until its dedication in 1893, members of The Church of Jesus Christ of Latter-day Saints were confronted with political hostility from the US government and severe challenges imposed by nature itself.

This enthralling book, written by master storyteller Mark Henshaw, tells the narrative of the building of that iconic temple—a place of worship and refuge forty years in the making. Available now at Deseret Book and deseretbook.com.