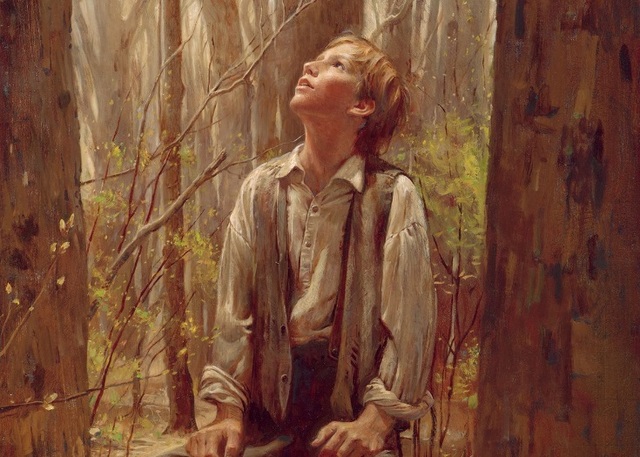 Joseph Smith recorded that God the Father and Jesus Christ appeared to him in a grove of trees near his parents’ home in western New York State when he was about 14 years old. Concerned by his sins and unsure which spiritual path to follow, Joseph sought guidance by attending meetings, reading scripture, and praying. In answer, he received a heavenly manifestation. Joseph shared and documented the First Vision, as it came to be known, on multiple occasions; he wrote or assigned scribes to write four different accounts of the vision.

Joseph Smith published two accounts of the First Vision during his lifetime. The first of these, known today as Joseph Smith—History, was canonized in the Pearl of Great Price and thus became the best known account. The two unpublished accounts, recorded in Joseph Smith’s earliest autobiography and a later journal, were generally forgotten until historians working for The Church of Jesus Christ of Latter-day Saints rediscovered and published them in the 1960s. Since that time, these documents have been discussed repeatedly in Church magazines, in works printed by Church-owned and Church-affiliated presses, and by Latter-day Saint scholars in other venues.1 In addition to the firsthand accounts, there are also five descriptions of Joseph Smith’s vision recorded by his contemporaries.2

The various accounts of the First Vision tell a consistent story, though naturally they differ in emphasis and detail. Historians expect that when an individual retells an experience in multiple settings to different audiences over many years, each account will emphasize various aspects of the experience and contain unique details. Indeed, differences similar to those in the First Vision accounts exist in the multiple scriptural accounts of Paul’s vision on the road to Damascus and the Apostles’ experience on the Mount of Transfiguration.3 Yet despite the differences, a basic consistency remains across all the accounts of the First Vision. Some have mistakenly argued that any variation in the retelling of the story is evidence of fabrication. To the contrary, the rich historical record enables us to learn more about this remarkable event than we could if it were less well documented.

Accounts of the First Vision

Each account of the First Vision by Joseph Smith and his contemporaries has its own history and context that influenced how the event was recalled, communicated, and recorded. These accounts are discussed below.

1832 Account. The earliest known account of the First Vision, the only account written in Joseph Smith’s own hand, is found in a short, unpublished autobiography Joseph Smith produced in the second half of 1832. In the account, Joseph Smith described his consciousness of his own sins and his frustration at being unable to find a church that matched the one he had read about in the New Testament and that would lead him to redemption. He emphasized Jesus Christ’s Atonement and the personal redemption it offered. He wrote that “the Lord” appeared and forgave him of his sins. As a result of the vision, Joseph experienced joy and love, though, as he noted, he could find no one who believed his account.

Image of "The Desires of My Heart" by Walter Rane retrieved from history.lds.org