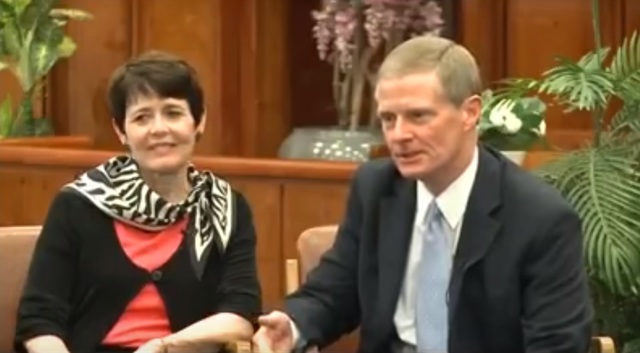 What was meant to be a loving, encouraging remark to homosexual members within the Church has quickly been twisted, pulled out of context, and cut up by members of the media, making it appear as if Elder Bednar and the other leaders of the Church are anything but loving and supportive of its members.

It's a popular tactic in the media, using an inflammatory title in hopes that the shock value will grab attention. And it works. Unfortunately, for those who don't take time to read beyond the headline, they are left thinking that our inspired Church leaders are insensitive, out of date, and even a bit naïve.

But we know this isn't the case.

Maybe you've seen the headlines carried by magazines like The Huffington Post and The Independent: "Mormon Leader Claims Church Has No Homosexual Members."

If you have, please understand the context of the situation before jumping to conclusions or the emotional, negative reactions these media outlets want to elicit. Elder Bednar was offering encouragement to Church members who struggle with same-sex attraction by making a strong, though surprising point. Here's the rest of his comment that has been overlooked:

As a member who has heard and loved the powerful words Elder Bednar has shared over the pulpit for over a decade, I know and have felt of his empathy and love for all Latter-day Saints. It's clear to me that Elder Bednar was not dismissing members of the Church who are gay, lesbian, transgender, or who experience other struggles regarding sexual attraction, identity, or gender; he didn't want to simplify their situation by labeling it. I believe that he, like our Heavenly Father and the other Brethren, understands that each person is unique—each person's challenges, trials, and temptations as well as their life path are so extremely personal that they cannot be reduced to a single label. Nor can their struggles be addressed in the same way.

► You'll also like: Elder Holland: How We Can Love & Help Members Struggling with Same-Gender Attraction

And that's the beauty of the Atonement and a Church that believes in personal revelation. No matter our pains, our isolation, our struggles, our heartbreaks, and our experiences, the Savior will succor us, heal us, and strengthen us right where and when we need healing.

This misused quote came up during Elder Bednar's trip to Chile, when he participated in a question and answer session with local Church members. One member asked, “How can homosexual members of the Church live and remain steadfast in the gospel?”

Elder Bednar then gave this surprising response: “First I want to change the question–there are no homosexual members of the Church. We are not defined by sexual attraction. We are not defined by sexual behavior. We are sons and daughters of God and all of us have different challenges in the flesh. . . . Simply being attracted to someone of the same gender is not a sin."

This counsel reminds me of the advice Elder Holland shared with a young man struggling with same-sex attraction: “You serve yourself poorly when you identify yourself primarily by your sexual feelings. That isn’t your only characteristic, so don’t give it disproportionate attention. You are first and foremost a son of God, and He loves you.

"What’s more, I love you. My Brethren among the General Authorities love you. I’m reminded of a comment President Boyd K. Packer made in speaking to those with same-gender attraction. ‘We do not reject you,’ he said. ‘… We cannot reject you, for you are the sons and daughters of God. We will not reject you, because we love you.’”

Check out this video of Elder Bednar's response below to see for yourself the love and respect with which he addresses this issue: