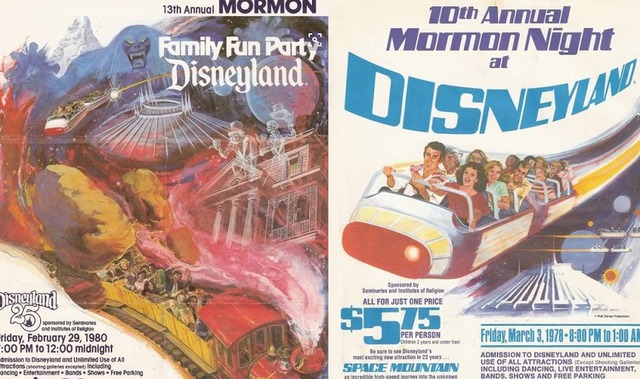 If you were Mormon and lived in the '70s and '80s, you could have gotten into Disneyland for six dollars.

Knowing most Mormons' obsession with everything Disney, there's little doubt this event was a big hit among LDS families, which probably explains why the "Mormon Family Fun Party" lasted for over a decade. Sponsored by LDS seminaries and institutes of religion, even the posters and tickets mentioned that "LDS standards [are] to be observed." 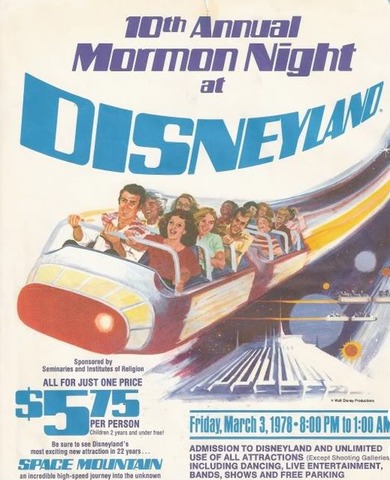 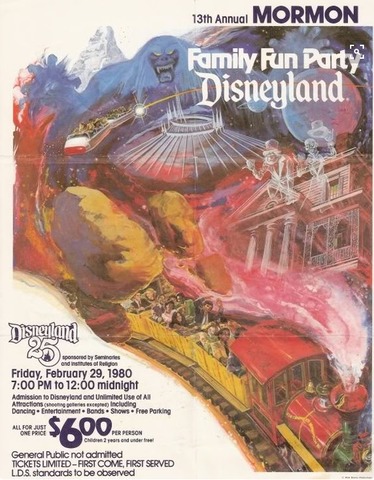 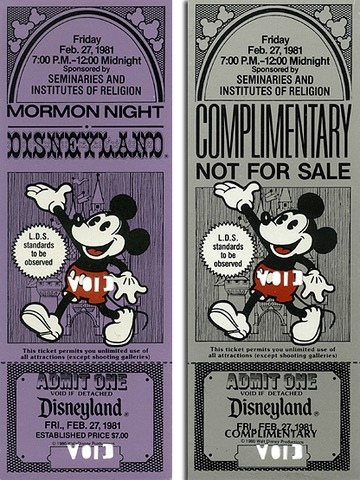 But the Mormon Disney craze began even before these Mormon family nights. For example, a Church magazine, The Children's Friend, published an article on Disneyland in 1959.

It begins, "Probably you have been seeing the enchanting Disneyland program on television. Did you know that there is also an actual place called Disneyland? It is near Los Angeles, California. It is a 160-acre world of fact and make believe. It is a world’s fair, a playground, a community center, a museum of living facts, and a showplace of beauty and magic all rolled into one."

Entitled "Disneyland," the article by Charles Coombs details each of the four lands in Disneyland and the rides and attractions open at that time (King Arthur's merry-go-round, Pinocchio's puppet show, Dumbo's ride, the monorail, a rocket ride, etc.).

And that's not the only time it's been mentioned. When President Thomas S. Monson was serving as the First Counselor in the First Presidency, he spoke about Disneyland in a talk during general conference:

My wife and I a few years ago joined our children, their companions, and the grandchildren at Disneyland in southern California. Beyond the entrance to the famous theme park, the group rushed to what was then the newest feature—Star Tours. You enter a simulated rocket, take your seat, and fasten your seat belt. All of a sudden the entire vehicle begins to vibrate violently. I think the mechanical voice which comes over the loudspeaker calls it “heavy turbulence.” (I have never returned to this featured ride. I get all the real turbulence I can handle just flying from place to place fulfilling my responsibilities.)

After recuperating for a few minutes, we journeyed to the feature with the longest line. It is called Splash Mountain. The crowd filed round and round in a serpentine pattern. The music, which was piped through the loudspeakers to the waiting throng, contained the words of the song:

By now we were ready to board the boat which would carry us in a vertical dive that evoked screams from the passengers in the boat ahead as it roared down the waterfall and glided to a stop in the water below. Just before taking the plunge, however, I noticed on one wall a small sign declaring a profound truth: “You can’t run away from trouble; there’s no place that far!”

These few words have remained with me. They pertain not only to the theme of Splash Mountain but also to our sojourn in mortality.

With clean family fun in abundance and a fun history with the Church, no wonder Latter-day Saints love Disney and Disneyland.