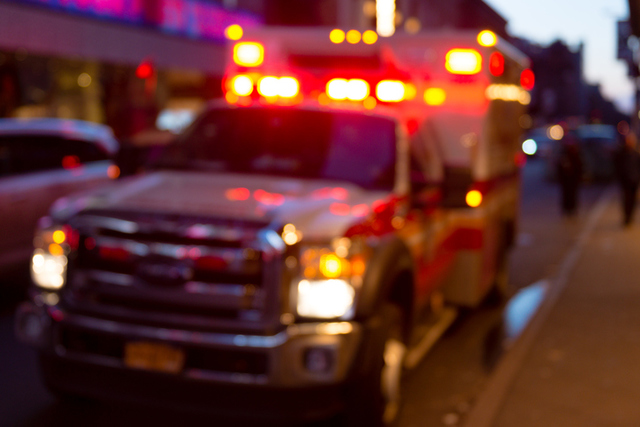 This is the miraculous, true story of my brother David, but it’s also a story about the strength and power of family during difficult times.

Most importantly, this is a story about faith in God’s promises.

One of my favorite quotes on faith comes from Boyd K. Packer. Said he: “You exercise faith by causing, or by making, your mind accept or believe as truth that which you cannot, by reason alone, prove for certainty. The first exercising of your faith should be your acceptance of Christ and His atonement.”

I am a committed Mormon. But I will be honest in telling you that I have had many struggles with faith. I have had many doubts. I've struggled with doctrines, with the opinions of others, with Church leadership, and with aspects of Church history. But amid all my doubts, I've always had faith in the priesthood.

The reason I have never doubted the priesthood is because of my older brother, David.

My Family and David

I am the youngest of six children, but in 1979, my family consisted only of my parents, my two older sisters, and David. David had just had his first birthday after my family had moved into their new home in Anchorage, Alaska. On the evening of June 21st, my mother turned on the bath water and went to get the girls' pajamas before putting them in the tub. What my mother did not know was that the newly installed water heater was set to 160 degrees.

Hearing the sound of the water, my brother, David, moved to the bathtub while my mother was gone. He reached over the side to play and fell in with only his diaper to protect him from the scalding water.

My father, who was a bishop at the time, rushed to meet my mother at the hospital, where he found her "covered in tears and blood."

Amid the scramble of doctors and IVs, my dad gave his son a hurried priesthood blessing—the kind of blessing that any father would give in that kind of situation, a blessing that his son would live, that everything would be okay, and that he would be fully healed.

As David's suffering went on and on for days and weeks, my dad began to lose faith in the priesthood blessing that he had given to his only son. And the grim reports from the doctors only fueled his doubts. 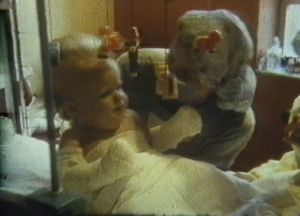 A nurse tending to David

According to my mother, after two weeks in the hospital, my dad said, "I'm just really worried, Lyn. I wonder if I need to go in and give David a blessing that he will be peacefully released from life because it's just too much for this little guy."

And so, after letting my sisters come in and say goodbye to their baby brother, my dad placed his hands on David's head to give him another blessing that he would die peacefully. But when my dad opened his mouth, he was inspired with a different set of words. He said that David would not die but would live to serve a mission, be married in the temple, and have children of his own. Closing the blessing in the name of Jesus Christ, my dad left the room and confidently told my mother, "David's going to live." 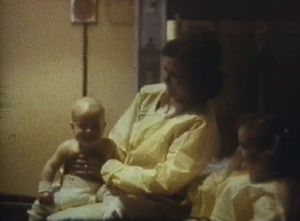 David with my mother and my sister

I have often thought about the blessing my dad gave to my brother. Who were those words for? Were they for my brother David—a baby who could not comprehend the words being spoken? Or were those words for my parents—people who would spend many more sleepless nights in hospitals, searching for certainty and wondering what dreams were available to a boy with burns all over his arms, legs, and stomach?

It was during this time that my parents' faith was put to the test, and the strength of my family shone through. This video takes place between the time that my brother received the blessing and the time he was finally released from the hospital:

The Fulfillment of the Blessing

I don't think I fully realized the magnitude of that blessing and the faith it required until recently. A blessing like that has a timeline: mission, marriage, family. When you're looking at your burned son in the hospital, you want the miracle to come right away. But that blessing required faith every day because it was a day-by-day thing. The blessing was not fulfilled until more than 30 years later, when Davi and his wife, Kirsten, celebrated the birth of their son, Roman. 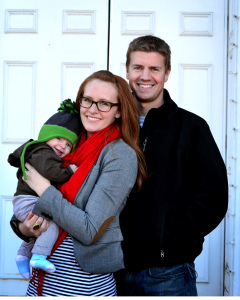 David with his wife, Kirsten, and his son, Roman

Thirty years later, almost to the day of David's blessing in the hospital, David placed his scarred hands on my head and gave me a priesthood blessing. The blessing he gave me was one of counsel as to whom I would eventually marry. The particulars of the blessing are sacred to me and would take too long to explain. Suffice it to say, the words he spoke challenged my faith and forever changed the course of my life.

In his book The Infinite Atonement, Tad R. Callister poses these questions on faith:

"Does not each of us confront those moments in life when faith and the reason of the world are seemingly incompatible and we must choose between the two? We find ourselves at a spiritual crossroad—one path paved with the knowledge and reason of man, the other paved with faith in God."

At the luncheon on my wedding day, David spoke about the blessing he had given me and again confirmed the witness he and I both received that day. I remember looking at my bride, Kim, and my heart filled with gratitude not only for the restored priesthood but also for the faith of my parents and faith of my brother.

Through the Atonement, God has assured us that all things will be made right and that all things shall work together for our good. Christ asks that we have faith in Him and in His promises. As Dennis E. Simmons said, "Men accomplish marvelous things by trusting in the Lord and keeping His commandments--by exercising faith even when they don't know how the Lord is shaping them."

Seth Adam Smith is the author of  Marriage Isn't for You and the new novel, Rip Van Winkle and the Pumpkin Lantern. Read more from him at sethadamsmith.com.