When Parley P. Pratt Outwitted a Policeman and His Police Dog

Parley P. Pratt seems to have been endowed with a healthy portion of spunk, humor, and hopefulnes—even downright ingenuity. He tells of one occasion when he was interrupted in his preaching, arrested on trumped-up charges, and taken before a corrupt judge.

I was soon ordered to prison or to pay a sum of money which I had not in the world. It was now a late hour, and I was still retained in court, tantalized, abused, and urged to settle the matter, to all of which I made no reply for some time. This generally exhausted their patience. It was near midnight. I now called on Brother Petersen to sing a hymn in the court. We sang, "O How Happy Are They." This exasperated them still more, and they pressed us greatly to settle the business by paying the money.

I then observed as follows:

May it please the court, I have one proposal to make for a final settlement of the things that seem to trouble you. It is this: If the witnesses who have given testimony in the case will repent of their false swearing, and the magistrate of his unjust and wicked judgment and of his persecution, blackguardism and abuse, and all kneel down together, we will pray for you, that God might forgive you in these matters.

[Parley was then "conducted to a public house" and locked in for the night, for the prison was some miles away and could not be reached until morning. Parley's companions were freed, and he promised to join them soon.]

After sitting awhile by the fire [next morning] in charge of the officer, I requested to step out. I walked out into the public square accompanied by him. Said I, "Mr. Peabody, are you good at a race?"

"No," said he, "but my big bulldog is, and he has been trained to assist me in my office these several years; he will take any man down at my bidding."

"Well, Mr. Peabody, you compelled me to go a mile, and I have gone with you two miles. You have given me an opportunity to preach, sing, and have also entertained me with lodging and breakfast. I must now go on my journey; if you are good at a race, you can accompany me. I thank you for all your kindnesss. Good day, sir."

I then started on my journey while he stood amazed and not able to step one foot before the other. Seeing this, I halted, turned to him, and again invited him to a race. He still stood amazed. I then renewed my exertions and soon increased my speed to something like that of a deer. He did not awake from his astonishment sufficiently to start pursuit till I had gained perhaps 200 yards. I had already leaped a fence and was making my way through a field to the forest on the right of the road. He now came hallooing after me and shouting to his dog to seize me. The dog, being one of the largest I ever saw, came close on my footsteps with all his fury. The officer [was] behind still in pursuit, clapping his hands and hallooing, "stu-boy, stu-boy—take him—watch—lay hold of him, I say—down with him," and pointing his finger in the direction I was running. The dog was fast overtaking me and in the act of leaping upon me when, quick as lightning, the thought struck me to assist the officer in sending the dog with all fury to the forest a little distance before me. I pointed my finger in that direction, clapped my hands, and shouted in imitation of the officer. The dog hastened past me with redoubled speed toward the forest, being urged by the officer and myself, and both of us running in the same direction.

Gaining the forest, I soon lost sight of the officer and the dog and have not seen them since. . . . A church of about 60 members was soon organized in the place where I had played such a trick of deception on the dog. 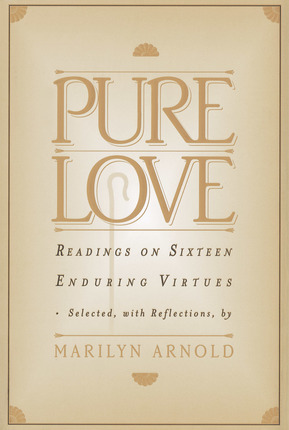 A book of virtues especially for Latter-day Saints. Pure Love: Readings on Sixteen Enduring Virtues, a book best described as one that provides delightful and informative hours of just plain good reading—old favorites, little-known gems, thought-provoking commentaries, inspiring sermons, and fanciful children's pieces. Marilyn Arnold has drawn quotations, letters, essays, thoughts, poems, and literature from the world of moral wisdom and art as well as from the inspired wisdom and art in The Church of Jesus Christ of Latter-day Saints. When preparing talks and lessons delve into the words of such writers and speakers as Eliza R. Snow, S. Dilworth Young, and past General Authorities along with Samuel Johnson, Leo Tolstoy, Martin Luther, John Wycliffe and others. This volume portrays and affirms the principles taught in the thirteenth Article of Faith and Paul's definition of charity as found in 1 Corinthians. It has the potential to deepen our spiritual understanding and turn our hearts toward the virtues taught and exemplified by Jesus Christ, leading all of us to practice more earnestly the virtues encompassed by true charity.