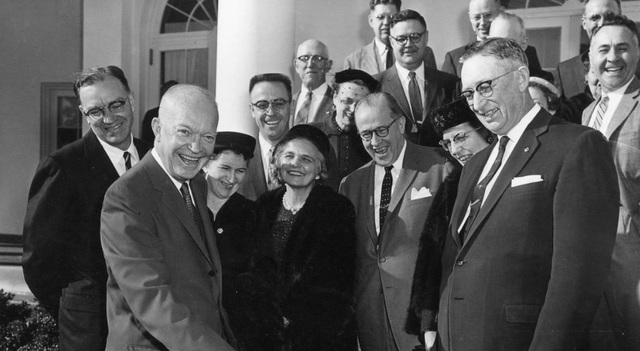 When a U.S. President Had FHE with President Oaks (+ More Times Presidents Have Attended FHE)

Did you know that two U.S. presidents have attended FHEs at the houses of apostles?

While serving in the Quorum of the Twelve Apostles, Elder Ezra Taft Benson also served as the 15th United States Secretary of Agriculture during both of President Dwight D. Eisenhower's terms. Elder Benson's time as a religious and government leader was busy and tumultuous—with Benson being the target of public praise and frequent criticism. During this time, Elder Benson remembered his calling as a witness of Jesus Christ and put that conviction above all others. "It is good strategy to stand up for the right, even when it is unpopular. Perhaps I should say, especially when it is unpopular" he said (New Era, August 1989).

From opening political meetings with a prayer to giving copies of the Book of Mormon to world leaders, Elder Benson found ways to perform missionary work in every setting. On September 24, 1954, Elder Benson and his wife allowed popular news reporter Edward R. Murrow to broadcast an unrehearsed family home evening in their home on a Friday night TV program. "Mr. Murrow received more fan mail as a result of that program than he had received for any other. People from all over the country and from varied religious backgrounds wrote to thank the Bensons for their shining example" (“The Life and Ministry of Ezra Taft Benson,” Teachings of Presidents of the Church: Ezra Taft Benson).

In fact, Elder Benson often sent President Eisenhower uplifting passages from the Book of Mormon and once had the president come to his home to participate in a family home evening. About Elder Benson's service as the Secretary of Agriculture, President David O. McKay said his work would “stand for all time as a credit to the Church and the nation” (Cross Fire).

While Elder Dallin H. Oaks served as the president of Brigham Young University, his family entertained "the chief justice of the United States Supreme Court, the chief justice and other officials of the Soviet Supreme Court, former United States President Gerald R. Ford, three Presidents of the Church, and a variety of other General Authorities," according to lds.org.

While visiting BYU in December 1978, former president Gerald Ford joined the Oaks family in a family home evening. An article on it from Church News states:

"The home evening included the showing of two Church films, scripture readings by members of the Oaks family, and a musical number sung by Cherie Ringger, President Oaks' daughter.

"President Ford participated in the discussion, sharing a personal experience illustrating the high value he places on the family. He also shared the thought that the most important gift one gives is the gift of self, President Oaks said."

After the family home evening, President Ford expressed his appreciation and praise: "It is an inspiration to be in this atmosphere. Without hesitation or qualification, visiting the BYU family has been an inspiration to me and I thank you."

Lead image of President Eisenhower with a group outside the White House. Elder Benson is in the center with his wife, Flora. Image from the Deseret News.