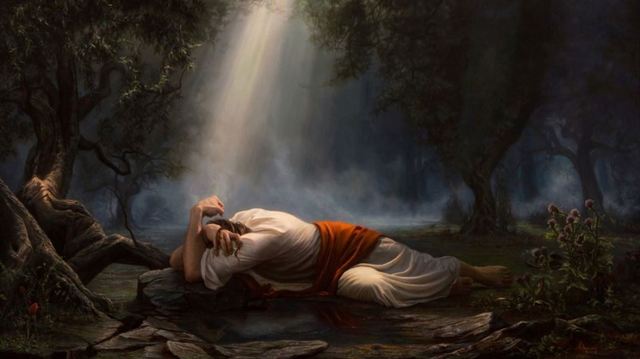 Who Was the Angel Sent to Comfort Jesus in Gethsemane?

While we have no way of definitively knowing the identity of the angel who visited Jesus in Gethsemane, here are some fascinating insights from Andrew Skinner's book Gethsemane.

In describing Jesus' experience in Gethsemane, Luke confirms many details found in the other three Gospels. Jesus left the upper room and went "as he was wont, to the mount of Olives" (Luke 22:39). Jesus was accustomed to going to Gethsemane, as John indicates (John 18:1-2). . . .

Luke's narrative also includes a stunning detail not found anywhere else in the New Testament. An angel appeared to the Savior for the express purpose of strengthening him in his extremity.

Who cannot be moved by this scene? Under extreme duress, Jesus pleads with his Father to remove the bitter cup. This Son is the Well Beloved Son. He has never done anything wrong, never! He is perfect and has always sought to honor his Father, to do everything right and good and compassionate.

But the one thing the Father cannot now do for his perfect Son is the very thing his Well Beloved Son has suggested—remove the bitter cup. He must watch his Son go through all this agony and more. Perhaps it is no exaggeration to say that at that fateful moment in the Garden of Gethsemane almost two thousand years ago, two divine Beings suffered and sacrificed to bring about an eternity's worth of possibilities for you and me and billions upon billions of others.

Latter-day Saint author Edwin W. Aldous has said: "The Father himself witnessed the intense physical and spiritual agony of his Only Begotten Son in Gethsemane and on the cross. And, just as he can remove our pain, he could have spared his Son that agony; indeed, he had the power to remove the bitter cup from the Savior, but the consequences were unacceptable" ("Reflection on the Atonement's Healing Power," 13). Brother Aldous also mentions a well-known statement by Elder Melvin J. Ballard of the Quorum of the Twelve Apostles, which is one of the grandest insights into this moment in Gethsemane that has ever been written:

"In that moment when he might have saved his Son, I thank him and praise him that he did not fail us, for he had not only the love of his Son in mind, but he also had love for us. I rejoice that he did not interfere, and that his love for us made it possible for him to endure to look upon the sufferings of his Son and give him finally to us, our Savior and our Redeemer. Without him, without his sacrifice, we would have remained, and we would never have come glorified in his presence. And so this is what it cost, in part, for our Father in Heaven to give the gift of his Son unto men." (Hinckley, Sermons and Missionary Services of Melvin Joseph Ballard,154-55)

If the scene in Gethsemane plays on our emotions, if it tugs at our heartstrings, that is well and good. It ought to, for it is at the very heart of who we are and what we can become.

Another apostle, Elder Jeffrey R. Holland, in a more recent day also spoke to the issue of our Heavenly Father not removing the bitter cup from his Only Begotten Son. In an Easter general conference address on 3 April 1999, Elder Holland began:

"I wish to thank not only the resurrected Lord Jesus Christ but also His true Father, our spiritual Father and God, who, by accepting the sacrifice of His firstborn, perfect Son, blessed all of His children in those hours of atonement and redemption. Never more than at Easter time is there so much meaning in that declaration from the book of John which praises the Father as well as the Son: 'For God so loved the world, that he gave his only begotten Son, that whosoever believeth in him should not perish, but have everlasting life' (John 3:16)."

I am a father, inadequate to be sure, but I cannot comprehend the burden it must have been for God in His heaven to witness the deep suffering and Crucifixion of His Beloved Son in such a manner. His every impulse and instinct must have been to stop it, to send angels to intervene— but He did not intervene. He endured what He saw because it was the only way that a saving, vicari ous payment could be made for the sins of all His other children, from Adam and Eve to the end of the world. I am eternally grateful for a perfect Father and His perfect Son, neither of whom shrank from the bitter cup nor forsook the rest of us who are imperfect, who fall short and stumble, who too often miss the mark. (Ensign, May 1999, 14)

Undoubtedly, many have wondered about the identity of that angel sent from the heavenly courts. Elder Bruce R. McConkie believed it to have been Michael, or Adam, the Ancient of Days and the father of the human family on this earth (Ensign, May 1985, 9).

Why Michael? Why would our Heavenly Father choose him, or why would he have been allowed to perform so noble a task? Choosing Michael makes perfect sense. Besides the sins of all humankind, for whose single, separate, and unique transgression was Jesus paying the debt owed to justice?

The apostle Paul taught, "For since by man came death, by man came also the resurrection of the dead. For as in Adam all die, even so in Christ shall all be made alive" (1 Corinthians 15:21-22). That is to say, the Savior's atoning work in Gethsemane is directly linked to Adam's transgression, which brought about the fall of man. The Creation, the Fall, and the Atonement are inextricably linked as the three pillars of eternity, the three central events upon which the Father's plan rests. Who better than Adam to aid and assist the Savior during his time of extreme distress than he whose actions had brought about mortality? Who better to thank the Savior for paying the debt that his actions had introduced (sin, suffering, and the other myriad effects of the Fall) than Adam himself? Who better to strengthen the Great Creator than he who, as one of the gods, assisted the Savior in laying the foundations of the very planet where the Savior himself, as well as all the children of Adam, would someday reside? Who better to minister to the mortal Jesus than one of his own mortal ancestors, for Adam was in very deed a forefather of the Savior's mother, Mary.

All of these reasons and others help us to understand why the Father could have sent mighty Michael to stand in his own stead and minister to his Only Begotten Son. He could not remove the bitter cup from his Son because that was the very reason his Son had been sent into the world— to redeem the entire family of God (John 18:37). Nor could the Father himself come to the aid of his Son, for that would not have given the Son the complete victory he needed to have over sin, sorrow, suffering, hell, and the effects of the Fall. The Father is pure, glorified, unadulterated life, and in Gethsemane the Savior had to experience all things, even descend below all things, to satisfy the demands of justice. The things he had to experience included spiritual death, the withdrawal of the Father and the removal of his immediate influence (which experience later returned to the Savior as he hung on the cross)—in truth, the atmosphere of hell itself.

In Gethsemane, Jesus was left alone by the Father. He was engulfed in darkness, spiritual death, and the agony of hell. He descended below the level of anything ever experienced by any man or woman. . . .

The Father could not assist his Son directly, but he sent an angel to strengthen him. The human family was saved by one of its own, and the Saving One was strengthened by one of his own— his many times over great-grandfather Adam.

Gethsemane by Adam Abram from ChurchofJesusChrist.org. 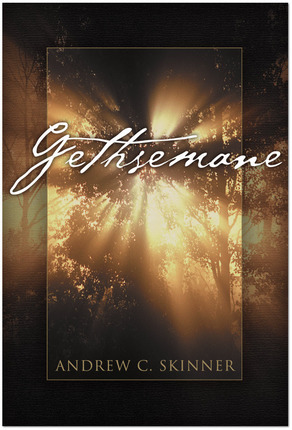 Get more fascinating insights into the Savior's atoning sacrifice in Gethsemane.

Living apostles and prophets have testified that the atonement of Jesus Christ is the most important event in time or all eternity, and the event upon which our Heavenly Father's plan of happiness rests.

Andrew C. Skinner explores the glorious triumph over sin, hell, spiritual death, and the devil, showing how the bitterest agony for the One provided the sweetest joy for all of us.