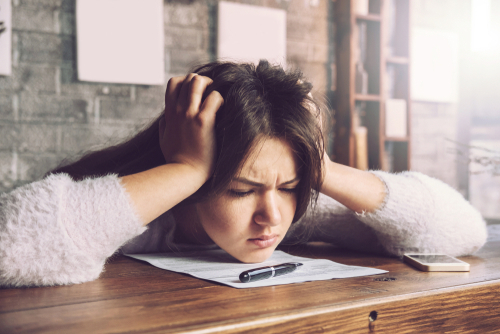 “I just want to get it right.”

I buried my head in my hands, suddenly realizing the source of all my anguish. My therapist had finally succeeded in pulling from me the cause of all my mounting frustration and feelings of failure: I just want to get it right. And having finally admitted that longing, I sensed how deeply I felt I had been “getting it all wrong.”

The counselor looked at me, waiting for me to say more, but I didn’t. I felt too defeated to speak.

“And who wanted to get it right?” he asked.

He repeated the question, but a little differently: “Before we came here to earth, who wanted to get it right?”

Then, he told me a story.

It was one I had learned in Primary—the story about Heavenly Father presenting a plan to His children that would “enable us to become like him and receive a fullness of joy” (“Plan of Salvation,” lds.org). One of God’s children, Satan, rebelled against this plan and “sought to destroy of the agency of man” (Moses 4:3). Doing away with agency, or choice, essentially meant that options and decisions wouldn’t matter, that everything we did would be “right” because there would be no “wrong.” In a world where agency doesn’t matter, we would technically always “get it right.”

“But what did the Savior want? Did He want us to ‘get it right,’ as you say?” my counselor asked.

“Yes,” I said a bit hesitantly. “Well, He wanted us to choose the right.”

My counselor nodded his head. “Exactly, he wanted us to make choices. He knew we wouldn’t always 'get it right,' and that was okay, because He provided a way that, no matter what we chose, we would have the opportunity to repent and choose again to return home. The Savior wanted us to have experiences, especially the experience of making choices.”

Elder Dale G. Renlund echoed this concept in his talk “Choose You This Day”:

For many years, my perfectionistic tendency to avoid making the wrong decisions at all costs kept me from taking full advantage of my agency. I would be too paralyzed with fear of making the wrong choice to make any choice—which, I now realize, played quite nicely into Satan’s original plan to render agency obsolete.

Neal A. Maxwell puts it another way: “Again, there can be no agency avoidance. No decision is a decision. Delay is a delusion, and that delay always discards the holy present. It simply throws it away” (Neal A. Maxwell, “Free to Choose,” BYU Speeches, Mar. 2004)

A major source of my decision-making delays was my problematic view of the options before me. I had assigned issues of morality to decisions that weren’t inherently good or evil. For example, I had gone into counseling in part because I had just broken up with a boy that I thought I was going to marry. Was my initial decision to date him a wrong choice? Had I ruined my chances for happiness elsewhere because I had gone down the wrong road? I was afraid to move forward in another relationship, fearing that I would make the same mistake.

Matthew Holland’s “Wrong Roads and Revelation” helped me with this predicament. In his New Era article, Brother Holland tells a story about how he and his father were at a fork in the road and could not remember which direction to take to return home. After praying, both father and son had the distinct impression of which road to take. But the “right” road turned out to be a dead-end, so the two turned around and took the other road. Why did they both receive the same impression to go down the wrong road? Brother Holland writes:

Sometimes in response to prayers, the Lord may guide us down what seems to be the wrong road—or at least a road we don’t understand—so, in due time, He can get us firmly and without question on the right road. Of course, He would never lead us down a path of sin, but He might lead us down a road of valuable experience (Matthew Holland, “Wrong Roads and Revelation,” New Era, July 2005).

We like to compare life to a test: We are given a set of multiple choice answers and there’s only one right answer for each question. If you make the wrong choice, you get deducted a point. But I don’t like that analogy anymore.

I think we came to this life to write the textbook. We came to this world to gain experience, to make decisions and learn from them. We look at our decisions—decisions that have nothing to do with morality or sin—and place them in categories of right or wrong, but maybe we should look at them like they are: experiences that teach us something, different options representing different chapters in the textbook of life.

Heavenly Father and Jesus Christ didn’t want us to “get it right,” they wanted us to choose the right. And, no matter what decision we make, Heavenly Father has provided a way to make up for our mistakes, shortcomings, and poor choices through the Atonement of Jesus Christ.