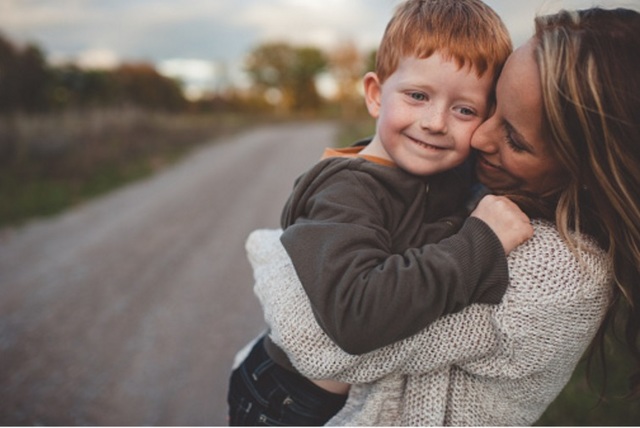 Why I "Force" My Beliefs on My Kids

If you visit a Mormon sacrament meeting on Sunday, the first thing you'll probably notice is the mid-level roar of all the child noise going on in the pews.

Children and families are a central part of our beliefs, which you can see (and especially hear) on Sundays at church. There's a reason we don't have the kids leave for a separate "children's sermon" or spend the hour playing in a nursery. We all sit as families in church, together.

Some days I don't hear much of what's said or I join the unofficial "parents' club" in the foyer because my kids are being rowdy, but I'd never dream of not attending church as a family.

I take my kids to church because out of all the things I want them to know, this is the most important. It's okay if you disagree, but I think it has the greatest potential for lasting happiness of anything I could teach them.

More and more, studies are showing that young families are disappearing from American churches at large and that children and teens aren't participating in religious life.

Most perplexing of all to me, I've heard parents say that they don't want to "make" their kids attend church or "force" their beliefs on them.

When I hear those arguments, I think, but isn't that part of my job as a parent?

If my kids were capable of always choosing what was best for them, it'd be one thing. But they're kids—especially when they're little, they choose what's fun and immediately rewarding; not necessarily what's best in the long run. And that's where Mom and Dad (the old killjoys) come in, making them eat their vegetables and do their homework and go to bed at a decent hour. And, in our house, get up and dressed for church on Sunday morning.

I understand not wanting to brainwash a child, but I worry that in the name of letting their kids choose, well-intentioned parents out there are really giving their kids no choice at all.

Taking my daughter to a restaurant and saying, "You can order whatever you want" without giving her any clue as to what's on the menu, or even whether we're in a steakhouse or a Chinese buffet, isn't giving her very much of a choice.

Flying my family to Europe and saying to my son as the plane lands, "The choice is yours—what are we doing on this trip?" isn't going to work out. If he wants to choose what to see, he first needs to know what there is to see. And even then, he'll need a parent to help him work out all the logistics. He simply doesn't have the life experience to do what I'd be asking him to do.

If kids could hardly be expected to order dinner or plan a trip all on their own, how are they supposed to develop a worldview from scratch without parental guidance?

That's why I think parents have a moral obligation to teach their children whatever belief system they think is right. Of course kids can tweak the framework they're given as they get older according to their emerging values (I ended up in a different church than my parents), but they need to start with something.

Years ago, I wrote an article called "Entertaining Young Children at Church" for an online magazine. I received a comment from one person who said that when a little kid doesn't like church, the parents shouldn't push him but just take turns staying home with him until he's older.

Sure, I could do that.

I could also let my kids who dislike brushing their teeth wait until they're older, but it's not like the habit will get easier to establish later on, and I think it's too important to wait, anyway. So I'll enforce it now, even on days when they don't particularly want to do it.

Maybe my younger kids would rather stay home playing than attend church, but that doesn't mean they should. The benefit of church isn't in just the one church service, but in the entire pattern of gospel learning and living that it's a part of.

They won't see that until they're older, and I'm alright with that. While they're still young, part of my job is to supply them with the long-term vision they aren't quite mature enough to grasp yet.

One day, they'll have the maturity and life experience they were lacking when I made so many of their daily decisions for them, including whether to go to church.

When that day comes, I hope they continue to choose the path I've set them on, but sure enough, they'll choose for themselves. And I won't regret for one minute the years I spent "making" them come to church with me.

Jenny Evans is a writer, a night owl, a perfectionist, and a Mormon mother of six. When she's not cleaning juice out of the carpet, she blogs about life with a houseful of kids at Unremarkable Files. You can also find her on Facebook and Twitter.