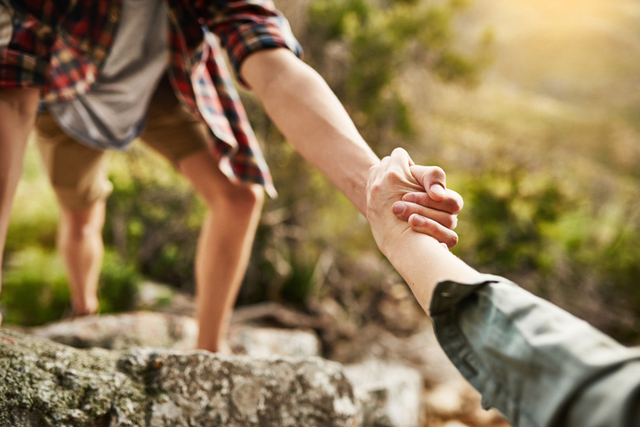 As Paul winds down his letter to the Corinthians, he urges them to “Follow after charity, and desire spiritual gifts” (1 Cor. 14:1).

A more literal translation highlights the urgency and energy of Paul’s command to “swiftly and eagerly chase after charity.”

In fact, so capable was Paul at word-smithing and communication, at packing enormous significance and meaning into a few words, we could translate his opening phrase of 1 Corinthians 14 in any of the following ways:

Some years ago I attended Yale Divinity School to acquire skills and knowledge in biblical studies. I know, you’re probably thinking right now, “Who in their right mind would want to spend a boatload of money to intensively study the scriptures especially after successfully completing four years of early morning seminary?” Okay, I’m not going to answer that question. Let’s move along.

Yeah, I should have been cured of my appetite for scripture study given all the fabulous resources available through regular church attendance and personal study.

And at least seminary was free.

I’m still paying off my university debt for personally experiencing at times “ever learning but never coming to a knowledge of the truth.”

But after a mission to South America and feeling the fire of the gospel as expressed through the scripture, I felt an unquenchable desire to spend more time with the scriptures, with the hope it would help my gospel understanding and application. So I went off to divinity school. (As I’ve said elsewhere, I didn’t become any more divine. I wonder if I can get a refund.)

There were many fascinating courses I took at the Yale Divinity School such as one in early Christian theology. I remember feeling awash in new terminology, expression, and words. In some sense, attending these classes was like learning a new language. Still, at times the experience seemed to cloud the clarity of truth.

I remember confessing to a friend one day over lunch that I was struggling with so many new words and concepts. My friend energetically confided to me that he had been documenting many of the new words he heard in class and then later looking them up in the dictionary. And he made an unexpected discovery when reading the dictionary.

My friend revealed to me that some of our professors were not using terminology as accurately and as clearly as they should. “Really?” I mused. “How can I expect to understand the main ideas of a course when professors are using big, bold words in confusing or erroneous ways?”

I felt that my friend had shown me what was behind the curtain. Professors were speaking in tongues, and not always to my edification. Sometimes it was to my confusion and bewilderment.

What Matters More—A Tongue of Angels or the Clarity of Charity?

I’ll tell you in a moment.

But first and foremost, I want to make exceedingly clear that most professors that I know are diligent at using clear and capable language to help learners learn. Most professors are not simply trying to confuse or intimidate learners with sesquipedalian language. I use the word sesquipedalian tongue-in-cheek because it means “many-syllabled words” signifying difficult and arcane words that obfuscate meaning rather than reveal.

Every now and then there are professors who want to grand-stand, show off their learning, vocabulary, sophistry, or supposed erudition.

When I listen to Paul saying that “Anyone who speaks in a tongue [or in grandiose verbosity as can be found in many intellectual domains] edifies themselves, but the one who prophesies edifies the church” (1 Cor. 14:4 NIV translation), I hear him advocating for plain speech. I hear Paul urging us to focus on the fundamentals of Christian discipleship, to not distract ourselves with the words and knowledge of men.

What good is fancy theological language if I struggle to apply faith and repentance in my life?

What good is sophisticated vocabulary to describe God if I don’t love my neighbor?

How can my own learning, or that of others, matter for problems large or small if I lack the greatest gift—charity?

If I happen to know more about some gospel matter than my neighbor, am I justified in pridefully speaking in grandiloquent terms?

Should I look down my nose at those who don’t have my training, my knowledge, my vocabulary?

When in Sunday School, am I the self-appointed steward to correct misunderstandings or less-than-eloquent expressions of simple faith and testimony? At Church, should I use the power of my language or experience to draw attention to myself? To make myself as a light unto the children of men because of some supposed superior tongue that I possess?

If I Speak in a Way that Does Not Edify Others, Why Am I Speaking?

What if I make the gospel harder for others because of what I say? What if I make it less clear? More confusing? Am I willing to learn the tongue of my neighbor to speak in a way that draws them closer to Christ? Or do I demand that others conform to my way of seeing and speaking of truth?

What does Paul teach me?

He teaches me the hierarchy of what I should diligently seek after: First charity, second prophecy, and only afterward does a far distant third emerge—speaking in tongues.

Yet what have the traditions of the academic fathers required me to accept as a hierarchy of significance? Speaking in learned tongues.

In all my years of academic training, I can’t think of a time where within the academic system I was taught, practiced, or benefited from targeted feedback (graded or otherwise) on my abilities at charity or prophecy.

If at some future day I see professors clamoring to teach classes that focus on character development, instead of content expertise, I’ll know that we are moving in the right direction as echoed in Paul’s words to eagerly run to embrace charity.

I whole-heartedly endorse the words of living and recent past prophets who have commanded the Latter-day Saints of God to seek out an education.

I add to that clarion call that in all of our educational or experiential getting, we must bathe in and filter everything through the lens of charity, the pure love of Christ, for without charity, we are nothing.