About five years ago, Emily Belle Freeman and Nish Weiseth sat down to eat lunch together.

These two women had never met. They were different ages, from different states, and belonged to different religions. By all means, nothing indicated that these two women would become friends.

But now, "We always joke that lunch was three hours long, but it was the start of a five- or six-year lunch," Weiseth says. "We just keep talking and having conversations over and over again."

But how Freeman and Weiseth became friends isn't what baffles people. No, it's the fact these two women—one a Latter-day Saint, one a non-denominational Christian—could have deep theological conversations without damaging their relationship.

► You'll also like: Why a Latter-day Saint Attends Bible Study with Her Non-Denominational Friend

The answer: "We found that, in our relationship, the thing that has been the most strengthening for us is to focus on what we have in common—which is love of family, love God, love of God’s word," Freeman says.

By staying focused on what they have in common, a love of God's word in the Old and New Testament through Bible study, Freeman and Weiseth are able to support each other in their different faith traditions—not contend with conflicting views.

And over time, more and more people have begun asking Freeman and Weiseth how they can strengthen their interfaith friendships too instead of shying away from religious topics.

"We just kind of realized there's a real desire and hunger for this among women who want to be able to reach out and just build relationships and friendships with their neighbors and other women in their community who may believe differently than they do," Weiseth says.

This led Weiseth and Freeman to create Multiply Goodness, an interfaith Bible study group that intends to bring women together through learning more about what they have in common: a love of God's word.

But, for the first five years, it looked like group membership was in a slog. Weiseth says she and Freeman did everything they could to try to make things work, but membership stayed relatively low. Then, four months ago, "We went from 0 to 100," Weiseth says. "We're all still trying to catch up and get our feet under us."

More than 1,300 women of multiple Christian faiths and a few women from non-Christian religions have joined in the study group through live Bible studies, Instagram devotionals, and study packets.

And the sudden surge in interest could not have come at a more perfect time. With the recent historic meeting between President Russell M. Nelson and Pope Francis in Rome, the message of focusing on what we have in common with other religions has been on the minds of many Latter-day Saints, including the general presidencies of the Relief Society, Young Women, and Primary, who all wanted to meet with the organizers of Multiple Goodness.

Initially, Freeman and Weiseth thought that the meeting would be small: one general auxiliary leader would meet with just the two of them and that would be all. But Weiseth and Freeman quickly realized it would be so much more than that.

"I realized, 'Oh my gosh; we're going to be meeting with the presidencies of every auxiliary organization that is women-led in the Church,'" Weiseth says. "I realized very quickly this is a really big deal. This does not happen every day."

All 13 Multiple Goodness organizers were invited to a meeting with the general auxiliary presidencies at the Relief Society building at Temple Square.

And for about an hour and a half, the presidencies of all the women-led organizations in the Church discussed how Mulitple Goodness was able to unite women of different faiths without the friction of conflicting theologies.

"One of the things that we talk about a lot is, 'What if your only motive was love?'" Freeman says. "What if your motive was to love your neighbor or your coworker or family member better? And if that was the way you entered every relationship, what would be different?"

And nothing illustrated this more perfectly than when Weiseth and Freeman first walked into the Relief Society building and saw the general auxiliary presidencies and organizers of Multiple Goodness together.

"All the presidencies of all the auxiliaries in the Church and our whole team just laughing and hooting and hollering and carrying on and they were just becoming friends, like fast friends," Weiseth says. "Everyone was so enthusiastic about meeting each other. It was just a really sweet time for us to get to know them, and they got to know us."

The meeting, the first time leaders of a Christian faith had met with Multiple Goodness, was one that neither Weiseth or Freeman will forget.

"They were just so receptive and so generous and really encouraging," Weiseth says. "They just kept telling us over and over again, 'This is incredible, just remarkable. You guys are doing such good work. There's so much light here. There's so much goodness here.' And for us, that was just really encouraging and it was really affirming to us to feel like we're doing the right thing."

As Weiseth and Freeman continue their Bible study group and spread the message of unity and faith through Multiple Goodness, Freeman says they hope others will reach out to those of different faiths in love and genuine friendship.

"What I’ve found as we reach out to these people who are in a different faith community, we learn things from them that make us better," Freeman says. "It strengthens our own faith. It strengthens our families. That deep and abiding friendships can come from people who are similar to us in ways that we don’t recognize because we just forget to go across the street and ask or to meet them. And I think it’s important for all of us to realize there is so much good in the world. There is so much good outside our own faith communities. And as we cross those religious boundaries and we get to know our neighbors, that’s when our communities become better."

Listen to more of Emily and Nish's story below: 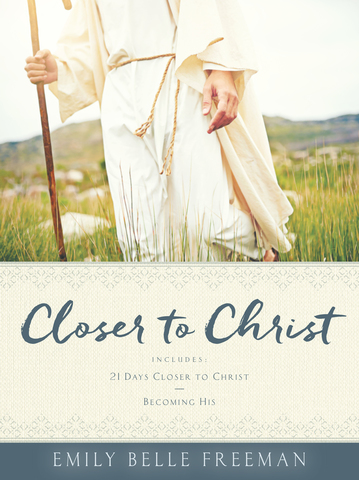 Combining her two best-selling books 21 Days Closer to Christ and Becoming His into one engaging new volume, Emily Freeman first invites us on a 21-day journey toward a closer relationship with the Lord Jesus Christ. She then outlines a twelve-month path of discipleship divided into individual areas of focus, each containing invitations for personal growth, inspired counsel from prophets and apostles, and suggested scriptures to help us focus our efforts.

As you draw closer to Christ, you'll discover ways that He can refresh you spiritually, strengthen you in the face of adversity, and help you find more joy.