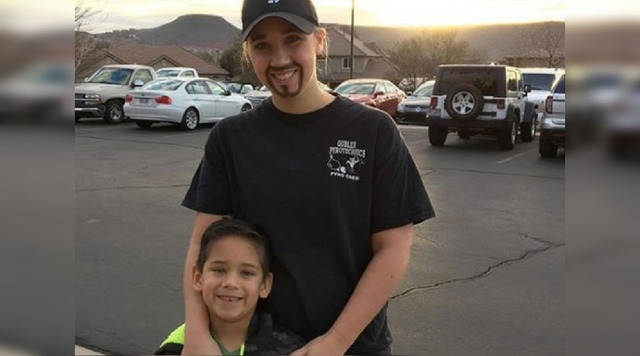 When Whitney Kittrell read a note stating her son's kindergarten was going to have a dads and doughnuts event, "My heart kinda’ sank," she told KUTV.

Kittrell, an LDS single parent of two, wrote in a Facebook post that she works hard to give her children a "normal" life as a single mom. But when she asked her son if her grandfather would like to go instead to the event, her son gave an unusually sweet answer for a kindergartener.

"He just smiled and said 'No. I want you to go. You're my mom and dad,'" according to the viral Facebook post that has been shared more than 10,000 times.

And so, donning a painted-on mustache and goatee and her "best dad outfit," Kittrell followed her son's wishes.

Although Kittrell told KUTV that the dads and grandfathers at the event didn't say anything about her appearance, and she got a few glances and giggles from the other children at the event, Kittrells son proudly introduced her to his friends.

“I was so embarrassed but I couldn't help but smile when he introduced me to his little friends saying, "this is my mom ... she's my dad too so I brought her!" Kittrell told KUTV.

But when it came time for Kittrell to say goodbye, she knew dressing up as man for her son was worth it.

"When I went to leave he ran after me and hugged me tight around my neck and whispered "mom... I know that you'll always be there and do anything for me. Thank you. I love you" kissed my cheek and ran off," according to the Facebook post.