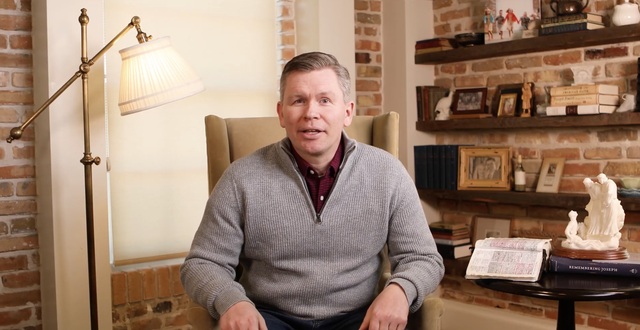 William T. Bruner represented most religions’ take on the fall of Adam and Eve when he wrote, “There was nothing fortunate about the fall of man. It was a total tragedy for God and man.” However, as Latter-day Saints, our doctrinal beliefs surrounding the fall are quite different. Daniel K. Judd outlined that difference in his piece, “The Fortunate Fall of Adam and Eve”:

“Latter-day prophets acknowledge that ‘Adam’s fall was a step downward,’ but teach that ‘it was also a step forward . . . in the eternal march of human progress.’ Latter-day leaders have also taught that mankind ‘should rejoice with [Adam and Eve], that through their fall and the Atonement of Jesus Christ, the way of eternal life has been opened up to us.’ Instead of disdainfully looking at the Fall as a tragedy, Latter-day Saints believe Adam and Eve’s eating from ‘the tree of the knowledge of good and evil’ (Genesis 2:17) to be one of the most theologically significant and fortunate events in human history.”

Thus, it is interesting that on this week’s episode of the All In podcast, Jared Halverson, a PhD student at Vanderbilt Divinity School and a teacher at the Salt Lake Institute of Religion, compared the fall of Adam and Eve to moments of faith crisis that many in the Church experience. Halverson explained that there has been much written by those both inside and outside our Church regarding stages of faith and then shared how he has come to understand the development of faith.

Morgan Jones: I think, Brother Halverson, one thing that has been interesting for me over the last couple years is that I've had several people very close to me step away from the Church. And it has caused me to reflect on my faith, to dig a little bit deeper, and I have found that my faith means more to me than it did before. So like you said, the middle of that teeter-totter, it can feel scary, but that's where our faith grows. So I want to emphasize that, for those who may feel like they are struggling right now, that they have questions or that someone that they love has questions, that that's not necessarily a bad thing. And I wondered, for you, as you have people who come to you with questions of faith, first of all, what advice would you give someone who does feel like they're having these questions? And I think sometimes it's feeling like you're having questions for the first time in your life that feels scary. So what advice would you give someone maybe in that position?

Jared Halverson: You gave the first piece of advice perfectly, and that's to reassure them that this is a normal part of life for many, many people. It's increasingly becoming a normal part of discipleship. We live in [the] Information Age, unlike anything in the past, and the Information Age also comes as a "misinformation age." I think there's great value in exploring and deepening our understanding, even when that leads to some questions that we're going to have. I think we grow up. The beautiful thing about the restored gospel is, it has the lowest possible floor and an infinitely high ceiling. And that low floor means that a new convert can begin to study and pray and gain their own testimony and join the Church, or an 8-year-old can be baptized. You can go to primary and learn the principles of the gospel and see the beauty of it there, but at the same time, the most well-read theologian can spend a lifetime deepening their understanding of the gospel and never run out of things to learn. That was one of the great things I saw at Divinity School, is the restored gospel has answers worth sharing with the world. And even at times when I'd have professors ask me specifically, "Can you give us the [Latter-day Saint] perspective such and such?" and it was amazing to see what conversation partners we can be.

► You may also like: Watch: Why a Latter-Day Saint Institute Teacher Decided to Go to a Bible Belt Divinity School

So as you're climbing the stairs from floor to ceiling, it's normal to run into things that surprised you, or that, "Oh, I didn't see this when I was in Primary." Well, heaven forbid we maxed out in Primary, right? Or "I'm a returned missionary, and I've never read this about Church history." Well, again, if we're believing in a gospel of eternal progression, what makes us think we're going to max out at 21? Right? And so keep learning. When I have students come in and sit down and just kind of offload or unload their concerns and questions, that's often the first thing I want to do with them is to reassure them that this is a step in a good direction, that they're learning, they're growing, they're progressing.

There's been some great literature out there on what they call the stages of faith. I know you've interviewed Thomas Wirthlin McConkie, who's fantastic. His book, Navigating Mormon Faith Crisis, is an excellent one, and it grew out of literature written by a Methodist theologian in the early 1980s, James Fowler, and he talked about these stages of faith. Elder and Sister Hafen have recently written a book, Faith is Not Blind, which grew out of an earlier work of Elder Hafen's called "Love is Not Blind," that beat Fowler by two years. . . . He's been working on this for the last 40 years. So when Elder Hafen talks about this, [he describes] simplicity [moving] to complexity, and then back to a more sophisticated simplicity, or as McConkie or Fowler described, these various stages of faith. That's how we grow, and that is walking across the teeter-totter. We start in this first stage of simplicity and naiveté in some ways. Everything's black and white, and everything's wonderful. Then we start inching across, and we're so nervous about it that we jump. We run to the other side. And that's that next stage of complexity. And yet we're often kind of bitter about where we've been.

As I've studied the stages of faith and tried to reassure people that they're actually progressing through them, the insight that came as the best blessing for me was superimposing that "stage" model of faith over the pillars of eternity that we grew up with in the Church—[the] Creation, [the] Fall, and [the] Atonement. The first stage is [the] Creation, and that's where we're in Eden and everything is beautiful and blissful. There are no weeds to pull, there are no problems, and everything about the Church is absolutely perfect. And then we hit the Fall stage, and you run up against questions you didn't have an answer to, or you see the beauty in other people's beliefs, and you thought you had a monopoly on the market. And what you do in that Fall stage is what's going to make the biggest difference in your life, because there are those that are in the Fall and only look back to Eden—because that's the only place that they've known—and people tend to look back either with nostalgia or with bitterness, and often the one follows the other.

You start with nostalgia thinking, "Oh, I wish I hadn't read that,” or "I wish I hadn't listened to that podcast," or "I wish I hadn't seen that anti-Mormon video," or whatever, and you just wish you could believe the way you did as a missionary or the way you did when you were a little kid. And sometimes that nostalgia then turns to bitterness and anger, a feeling of betrayal. You picture an Adam and Eve going, "I can't believe God set us up with those contradictory commands, and then He sticks the cherubim and the flaming sword, and he never wants me back, and we're angry, and look at all these thorns and briars and noxious weeds," until you realize it doesn't end here.

The third stage is [the] atonement. And it's higher and holier than the elevation of Eden ever was. You just have to have the faith to keep progressing forward. And I think once you can help somebody understand where they happen to be on that trajectory—of all faiths, we believe in the fortunate Fall. And believing in a fortunate Fall, can we apply that to a fall from faith? Can we apply it to a struggle or a wrestle? It's not as clear and as simple as it used to be, but that might actually be a sign that you're moving forward.

Now, the bitterness and the anger—I think it was Orson F. Whitney that said that the Fall had a twofold direction: it was both downward and forward. And I think the downward aspect is that negativity, and sometimes the skepticism and the cynicism that comes up when someone is really struggling in their faith. But the forward dimension of that downward movement is you know more than you used to. And you're learning, and you're growing, and hopefully you have a little more critical thought—and hopefully you have a little more openness. You're not as closed-minded as you might have been previously.

It's then just a matter of, "What do I do here?" And to me, it's sad to see those just stay and fester in that second stage, in the Fall, where east of Eden is not a place we want to live forever. So keep progressing. That's usually what I'll say to people. I'll try to kind of paint the picture of where they are on this journey. And when they recognize themselves in that fallen stage and can feel validated with the forward progress and also be able to kind of deal with some of the difficulty of the downward progress—that there's good and bad all mingled together—and then reassure them you don't have to go back. You were never meant to. And to go forward to the atonement stage. There had to be this passing through the valley to get on to the next mountain top, and there's hope. So as I always tell them, if you've progressed to get to this point, then just don't stop progressing. Keep learning. Things get better as you continue to progress.

And they've sometimes asked me, "How do I know when I'm in that atonement stage?" And I'll often say, "Well, you have charity for everyone in the previous stages. Those in Eden can't stand those east of you. And those east of Eden can't stand those in Eden. Once you get to the Garden of Gethsemane, you love everyone, no matter where they happen to be."