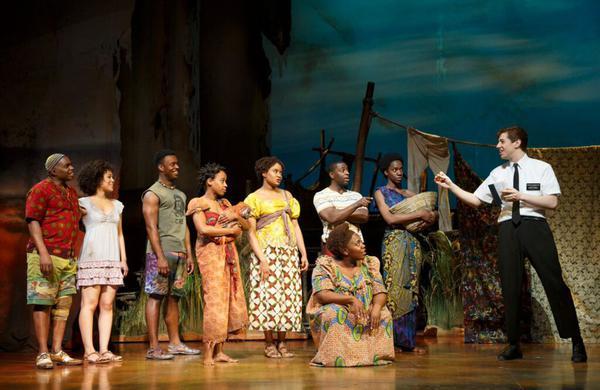 MR says: Despite being an Emmy Award-winning show, not all reviews of 'The Book of Mormon' musical have been glowing. In fact, some of the messages it sends are troubling--and not just to Mormons.

A few years ago, as part of a school assignment, I was asked to create a teaching presentation on a subject I was “very knowledgeable and passionate about.”

I chose Mormonism. And because my class was composed of fellow musical theater performers, I decided to use "The Book of Mormon" musical as the base line for our discussion about the beliefs and history of The Church of Jesus Christ of Latter-day Saints.

There was just one problem. I had never seen the musical, and I had no intention of seeing it. But in order to have an informed conversation with my classmates about how accurately this popular, Tony Award-winning musical portrays my church, I decided to get my hands dirty and study the script.

Did I find it funny? Yes, parts of it were genuinely hilarious.

Looking only artistically at the musical, there’s no question it’s a pretty brilliant and well-written comedy. I can laugh at the quirks of my LDS culture, such as Elder Price being force-fed Starbucks coffee by Satan’s minions in “Spooky Mormon Hell Dream.” And, to some extent, I'm OK with laughing at the gross stereotypes of the missionaries and other Mormon characters. (Although had they attempted doing the same using another religion, this musical would have been condemned and closed).