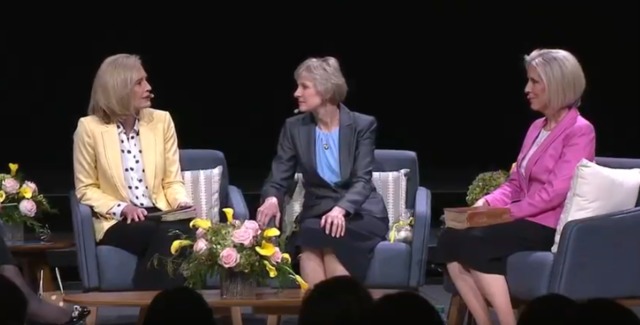 On Friday, the general presidents of all the women-led organizations in the Church met for a historic Sister-to-Sister event at BYU Women's Conference.

"I hope you brought your jammies and an extra mint brownie. We are going to answer all of them!" Sister Sheri Dew joked as she moderated the event.

While not all the questions were addressed, Sister Bigham, Sister Cordon, and Sister Jones answered several questions that relate to the women of the Church today.

1. How do we deal with the overwhelming concern that we are never enough?

"As I type this, my son is showing me a drawing of the solar system, my 1-year-old is crying, and my 3-year-old is asking for help with his train," the woman who submitted this question explained.

She explained that she was a mother of three and expecting another child. Beset with the expectations to do more and be more on top of her ever-mounting duties, this woman asked a question on the minds of many women today: How do we deal with the overwhelming concern that we are never enough?

"I wish I could wrap my arms around her," Sister Joy D. Jones said. "She was expressing feelings that we all have. We all live in different circumstances, different needs, but we all have the same concerns."

Sister Jones explained that there is a natural tension between the ideals of the gospel and the realities of life and, "It is natural to feel we are not doing enough, being enough. But in reality, through our Savior, we are enough."

In these circumstances where we feel overwhelmed, Sister Cordon advised that we seek an "extra dose" of Heavenly Father's love and that, if we do, "It may look messy, and we may still have the trials and tribulations, but we won't stumble."

As always, there is a balance between "running faster than we have strength" and the stretching and growing that we need in this life, Sister Bingham shared. In fact, "I think all of us would choose if we had that opportunity, we would make it easy" and do all the things that we want to do. However, it's not that easy.

And all these sisters would know.

Sister Cordon shared that while attending BYU Women's Conference on Thursday, she got a text from her husband that her son had just had nose surgery.

In a situation that would be easy to feel overwhelmed with conflicting duties and responsibilities, Sister Cordon shared, "What do you do? You put your mother hat on to sit by a young boy and say, 'You'll be okay,'" noting it's what we do with the messy in our lives that matters most.

And no one is exempt from the messy or the crushing feeling of not being enough.

"We've all had times where we've cried ourselves to sleep," Sister Bingham shared.

But during those times she knows that "when we allow [the Lord] to lead us, when we allow Him to strengthen us, we can overcome those things."

2. What suggestion do you have to work more effectively and in greater unity, especially when leaders may be dismissive of us?

The second question came from a woman who said that she had had experiences where she felt the male leaders in her ward had been dismissive to the female leaders.

"When I read this question, I really related," Sister Bingham said. "I've had some experiences with dismissive priesthood leaders."

She went on to share a time when she would leave ward councils fuming, feeling like a leader had dismissed her and other female leaders. One time it became too much, and as she came home, she slammed her purse down on her kitchen table in frustration.

However, as she discussed her feelings with her husband, she realized it might be more of a personality issue with that leader than blatant dismissiveness because of her gender.

And when she began to pray for this leader and seek to understand him, she noticed a change. She says she felt more charity toward him and his role.

This understanding helped Sister Bingham as she continued to work with the leader, because, as Sister Cordon said, "We never know what circumstances people are coming from."

To illustrate this point, Sister Cordon shared a personal and touching story of her son and his wife after they lost a child.

In December 2016, Sister Cordon's son and his wife were checking into a Florida airport. They had just tragically and unexpectedly lost their 2-year-old son on a vacation and were faced with the heart-rending task of flying home with his empty car seat.

Though Sister Cordon explained her daughter-in-law could have been offended, "She chose to realize this agent had no idea what had gone on in her life."

Instead, Sister Cordon's daughter-in-law and son explained to the agent what happened, and the three cried together. The agent then allowed the couple to board the plane without paying for the empty car seat.

Sister Cordon explained that it's important to sustain our imperfect leaders by acknowledging that they aren't perfect and that they will make mistakes and that Heavenly Father is "fresh out of perfect people so it's just us." As we seek for understanding, we will be more able to sustain our leaders.

3. How can I strengthen my marriage and family? How do we help those who struggle with the issue of family?

Families are an important part of the gospel, but it can sometimes be a painful topic. At times it can be difficult to balance the question of how we strengthen marriages and families while being sensitive to members who are LGBTQ, single, divorced, were abused, or who otherwise struggle with the issue of family.

Sister Dew addressed this topic as she shared two questions: How can I strengthen my marriage and family? And how do we help those who struggle with the issue of family?

Sister Bingham says it begins by creating a sense of belonging.

"We all belong to families," Sister Bingham said. "In this Church, we need to help each other understand that we all belong to the family of God, to our Relief Society family, to our ward family. No one is left out."

To help foster this feeling of belonging, it's important that we tailor our service efforts to each individual to help them feel loved.

For example, Sister Cordon shared a time when Sister Bingham, instead of bringing her a baked treat, brought her a few hardboiled eggs wrapped in decorative cellophane.

"Don't you love the fact that she loved me well enough to bring boiled eggs?" Sister Cordon laughed as she held up the eggs.

Though this may have seemed like a small thing, it helped Sister Cordon feel loved—something that is vital for strengthening relationships with all our families in the Church.

At the end of the event, Sister Bingham she wishes she could have addressed more questions, and for all the sisters who submitted questions, "My heart just reaches out to yours," she said. "It's good to ask questions; it's good to explore, but start with a basis of faith."

Though we may not have the answers to our questions right now, Sister Bingham says sometimes we have to have the faith to put our questions on the shelf until they can be answered in the future and trust that Heaven Father will help us move forward.

Sister Jones also advised that as we seek answers to our questions that we put "as much time into our spiritual indoctrination" as we do spending time searching on the internet.

While closing, Sister Bingham asked that the women of the Church reach out to each other in unity and that it is through being united as sisters of The Church of Jesus Christ of Latter-day Saints that the gospel can go forth. She said, "When we realize that as sisters we can support one another, we will truly become sisters in Zion."