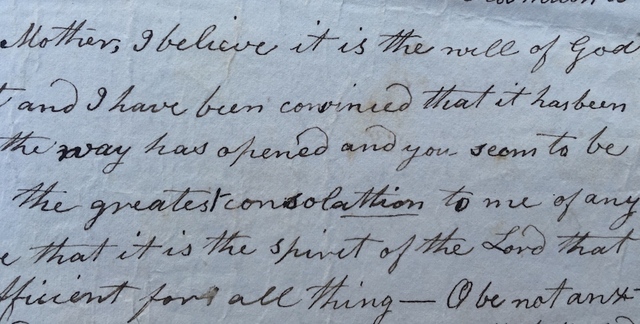 MR says: Phebe Carter's parents were set against her leaving their home in Maine to join the Saints in Kirtland, but this faithful sister sacrificed everything to "link her life with the Saints of God."

As I’ve mentioned in previous columns, I’m a treasure hunter–of historical artifacts.  I am particularly interested in early Church history.  A few months ago I spent several hours combing through stacks of letters that were written between Phebe and Wilford Woodruff.  This large group of letters had been recently acquired from descendants of Wilford Woodruff.  I was both fascinated and intrigued by the content of these letters.  It seemed as if each letter filled in a missing piece or clarified familiar stories in Church history.  I was especially interested to learn more about Wilford Woodruff’s wife Phebe.

I first heard the name “Phebe W. Carter [Woodruff]” when I watched the Church video Mountain of the Lord [1993] many years ago.  There’s a scene in the movie that shows Wilford Woodruff walking along a dirt road in Kirtland.  While he is walking, he hears the angelic voice of a woman [Phebe W. Carter] singing a hymn.  Wilford Woodruff soon joins in.  This surprises Phebe and she opens her second-story window to find out who is singing along .  It was Wilford Woodruff.  They were soon properly introduced and after a “lengthy” courtship of 2 1/2 months they were married.

Although the history of Wilford Woodruff is quite well known,  fewer know the story of Phebe W. Carter and how she made her way to Kirtland in the first place.  She truly was a remarkable woman of faith and courage.