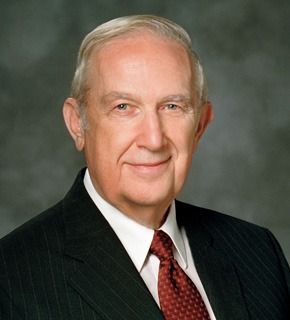 Excerpt from "To Acquire Spiritual Guidance" by Richard G. Scott:

Now I share an experience that taught me a way to gain spiritual guidance. One Sunday I attended the priesthood meeting of a Spanish branch in Mexico City. I vividly recall how a humble Mexican priesthood leader struggled to communicate the truths of the gospel in his lesson material. I noted the intense desire he had to share those principles he strongly valued with his quorum members. He recognized that they were of great worth to the brethren present. In his manner, there was an evidence of a pure love of the Savior and love of those he taught.

His sincerity, purity of intent, and love permitted a spiritual strength to envelop the room. I was deeply touched. Then I began to receive personal impressions as an extension of the principles taught by that humble instructor. They were personal and related to my assignments in the area. They came in answer to my prolonged, prayerful efforts to learn.

As each impression came, I carefully wrote it down. In the process, I was given precious truths that I greatly needed in order to be a more effective servant of the Lord. The details of the communication are sacred and, like a patriarchal blessing, were for my individual benefit. I was given specific directions, instructions, and conditioned promises that have beneficially altered the course of my life.

Subsequently, I visited the Sunday School class in our ward, where a very well-educated teacher presented his lesson. That experience was in striking contrast to the one enjoyed in the priesthood meeting. It seemed to me that the instructor had purposely chosen obscure references and unusual examples to illustrate the principles of the lesson. I had the distinct impression that this instructor was using the teaching opportunity to impress the class with his vast store of knowledge. At any rate, he certainly did not seem as intent on communicating principles as had the humble priesthood leader.

In that environment, strong impressions began to flow to me again. I wrote them down. The message included specific counsel on how to become more effective as an instrument in the hands of the Lord. I received such an outpouring of impressions that were so personal that I felt it was not appropriate to record them in the midst of a Sunday School class. I sought a more private location, where I continued to write the feelings that flooded into my mind and heart as faithfully as possible. After each powerful impression was recorded, I pondered the feelings I had received to determine if I had accurately expressed them in writing. As a result, I made a few minor changes to what had been written. Then I studied their meaning and application in my own life.

Subsequently I prayed, reviewing with the Lord what I thought I had been taught by the Spirit. When a feeling of peace came, I thanked Him for the guidance given. I was then impressed to ask, “Was there yet more to be given?” I received further impressions, and the process of writing down the impressions, pondering, and praying for confirmation was repeated. Again I was prompted to ask, “Is there more I should know?” And there was. When that last, most sacred experience was concluded, I had received some of the most precious, specific, personal direction one could hope to obtain in this life. Had I not responded to the first impressions and recorded them, I would not have received the last, most precious guidance.