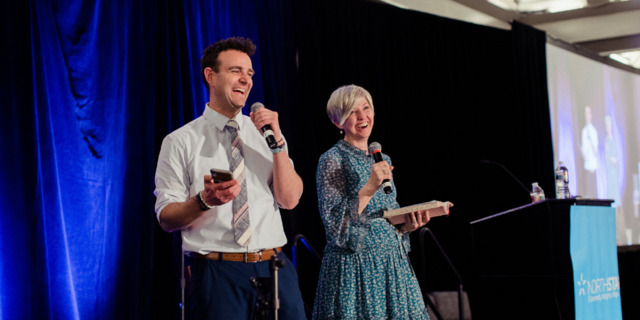 "There Is a Place for You": What Emily Belle Freeman and David Butler Taught LGBT Individuals about Belonging in the Church

Emily Belle Freeman had asked her friend for time to think about how to respond to his text message: “Emily, you can’t be Mormon and gay,” he’d written.

Her friend had left BYU to attend the University of Utah and had married a man. He was now going through a divorce and was struggling to feel connected to God. Freeman wanted to respond to his message in a thoughtful way.

The morning after Freeman received the text, President Russell M. Nelson in his first press conference as prophet in 2018 was asked how he planned to approach LGBT issues.

“God loves His children and we love them and there’s a place for everyone who wishes to do so—regardless of his challenges—to be with us in The Church of Jesus Christ of Latter-day Saints,” President Nelson said. Freeman replayed the quote several times and sent it to her friend. She knew there was a place for him in the Church and she knew there was work to be done so he could feel that.

Freeman, alongside her “Don’t Miss This” co-host David Butler, spoke Friday, March 6 at the 2020 North Star Conference in Salt Lake City of how there is a place for LGBT individuals in the Church. Freeman and Butler were two of the keynote speakers at the event, which drew in over 850 registrants. Other keynote addresses included Becket Cook, Scott and Becky Mackintosh, and a performance by GENTRI.

A Place at the Table

Butler echoed Freeman’s comments by stating that not only is there a place for LGBT members in the Church, they are also wanted in the Church. In the parable of the great supper in Luke 14, a man tells his servant to call together a feast. But when the servant invites those that are rich, they respond with various excuses. The man then tells the servant to invite “the poor, the maimed, and the halt, and the blind” (Luke 14:21), who all attend the dinner.

► You may also like: A Behind-the-Scenes Look at the Creation of Emily Belle Freeman and David Butler's 'Don't Miss This'

“One of the things that’s really cool about this parable, by the way, is don’t you think to yourself how the blind people got to the table in the first place?” Butler asked. “They don’t know how to make it, and people who can’t walk can’t make it either. So, it’s awesome that someone led or . . . carried these people to the table.”

After inviting these guests, the servant tells the man there is still room at the table. The man responds by having the servant “go out into the highways and hedges, and compel them to come in, that my house may be filled” (Luke 14:23).

“That is the Jesus I know,” Freeman said. “That is the Jesus I believe in . . . He looks around and then He says, ‘Someone’s missing. Go get them. . . . Compel them to come. They might not want to come on their own. You tell them I want them here, that I saved a seat for them. There is still room at this table for them.’”

The dinner guests, though they have their differences, also share important similarities.

“The only people that actually wanted to come were those who felt like they had imperfect lives,” Butler said. “The two things they have in common are . . . they all have a need . . . they have imperfect lives that weren’t ideal. And the other thing is they were all Jesus’s people. They all came because He was the one who invited them.”

Freeman noted that some in attendance at the conference may feel that there isn’t a place for them at the table.

Butler testified of a Savior who loves with an unconditional love. He shared the New Testament story in Luke 8 of the woman who had an issue of blood for 12 years and reached out to touch the Savior’s robes in the crowded streets of Jerusalem.

“I love this lady . . . because she thought, ‘If I just brush up against Jesus, it could make all the difference.’ I love the faith that this woman has,” Butler said.

Exploring the story further, Butler imagined what may have happened before the woman exercised her faith and was healed by Christ.

“I like to think someone earlier in that day told her about Jesus and said, ‘There is this healer miracle man coming through our city today,’ but unfortunately that person told her about His power but didn’t tell her about His heart, because she thought she had to hide behind a food cart. She thought she had to just brush up against Him instead of being able to come up to Him and be embraced and welcomed by Him. And I love that for 12 years this woman was an outsider, and in one word He brings her on the inside by calling her ‘daughter.’”

Freeman taught that the Savior accompanies us on our journeys. In Deuteronomy 2:7 the Lord tells the children of Israel that He had always been with them when they were wandering through the wilderness for 40 years. He was there to make sure they lacked for nothing.

“God will walk the journey with us,” Freeman said. “He will be a part of what’s going on.”

After watching what has been happening in the media recently with the changes to the BYU Honor Code, Freeman thought back to President Nelson’s statement in 2019 at BYU. The prophet discussed how the First Presidency and the Quorum of the Twelve Apostles had been supplicating the Lord about the 2015 policy regarding the baptism of the children of LGBT parents.

“I love what he says about that, which is this: ‘Whenever the sons and daughters of God weep—for whatever reason—we weep. So, our supplications to the Lord continued.’ He was talking about this issue and I love knowing that he is weeping while we are weeping over this, and I love that he is supplicating the Lord over this,” Freeman said.

The End Is Love

The only scriptural spot Butler knows of where the Lord talks about what Judgment Day is going to look like is in Matthew 25, where the Lord separates the sheep from the goats. The ones who inherit the kingdom of heaven are those who love others by feeding the hungry and clothing the naked.

Butler explained that he has developed a whole new idea in his mind about what Judgment Day will look like. He pictures Judgment Day being more about one important question: “Did you love well?”

Freeman explained that learning to love is part of our time on earth.

Though LGBT individuals face many challenges, Freeman concluded that while the journey can be painful, it doesn’t have to be made alone.

“The journey is sweeter because we are all in it together and because Jesus Christ through His grace will give us the enabling strength to make it through,” Freeman said.

North Star is a “faith-affirming resource for Latter-day Saints addressing sexual orientation and gender identity, and who desire to live in harmony with the teachings of Jesus Christ and the doctrines and values of The Church of Jesus Christ of Latter-day Saints,” according to its website. The organization is not owned by or affiliated with the Church. Past North Star Conferences can be viewed at northstarlds.org.

Over 115k YouTube users are subscribed to Emily Belle Freeman and David Butler’s Don’t Miss This YouTube channel. The goal isn’t that you won’t miss a single episode of the YouTube series but rather that you won’t miss the best parts of the scriptures studied in Come Follow Me. Perfect for your family study and for individuals of all ages, the Don’t Miss This Study Journal, created in partnership with LDS Living, begins with a weekly study schedule and is filled with fun and interactive study guide sheets that complement the Don’t Miss This weekly YouTube videos. Available now at DeseretBook.com.