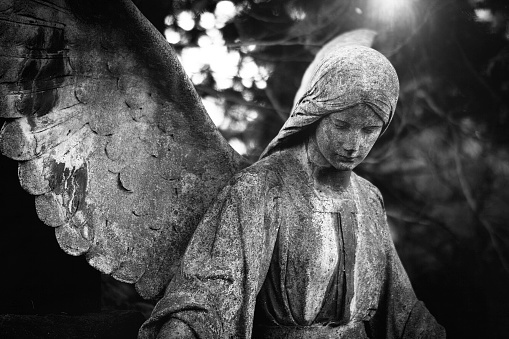 "We Need Help": When an Angel Called a Man to Work on the Other Side of the Veil

The following is an excerpt from President Wilford Woodruff's October 1881 general conference talk published in the Journal of Discourses, Volume 22. The Church recently made all of President Woodruff's journals available online, which you can study and access here.

The same Priesthood exists on the other side of the vail [sic]. Every man who is faithful in his quorum here will join his quorum there. When a man dies and his body is laid in the tomb, he does not lose his position. The Prophet Joseph Smith held the keys of this dispensation on this side of the vail [sic], and he will hold them throughout the countless ages of eternity. He went into the spirit world to unlock the prison doors and to preach the Gospel to the millions of spirits who are in darkness, and every Apostle, every Seventy, every Elder, etc., who has died in the faith as soon as he passes to the other side of the vail [sic], enters into the work of the ministry, and there is a thousand times more to preach there than there is here.

I have felt of late as if our brethren on the other side of the vail [sic] had held a council, and that they had said to this one, and that one, “Cease thy work on earth, come hence, we need help,” and they have called this man and that man. It has appeared so to me in seeing the many men who have been called from our midst lately.

Perhaps I may be permitted to relate a circumstance with which I am acquainted in relation to Bishop Roskelley, of Smithfield, Cache Valley. On one occasion he was suddenly taken very sick—near to death’s door. While he lay in this condition, President Peter Maughan, who was dead, came to him and said: “Brother Roskelley, we held a council on the other side of the vail [sic]. I have had a great deal to do, and I have the privilege of coming here to appoint one man to come and help. I have had three names given to me in council, and you are one of them. I want to inquire into your circumstances.” The Bishop told him what he had to do, and they conversed together as one man would converse with another. President Maughan then said to him: “I think I will not call you. I think you are wanted here more than perhaps one of the others.” Bishop Roskelley got well from that hour. Very soon after, the second man was taken sick, but not being able to exercise sufficient faith, Brother Roskelley did not go to him. By and by this man recovered, and on meeting Brother Roskelley he said: “Brother Maughan came to me the other night and told me he was sent to call one man from the ward,” and he named two men as had been done to Brother Roskelley. A few days afterwards [sic] the third man was taken sick and died.

Now, I name this to show a principle. They have work on the other side of the vail [sic]; and they want men, and they call them. And that was my view in regard to Brother George A. Smith. When he was almost at death’s door, Brother Cannon administered to him, and in thirty minutes he was up and ate breakfast with his family. We labored with him in this way, but ultimately, as you know, he died. But it taught me a lesson. I felt that man was wanted behind the vail [sic]. We labored also with Brother Pratt; he, too, was wanted behind the vail [sic].