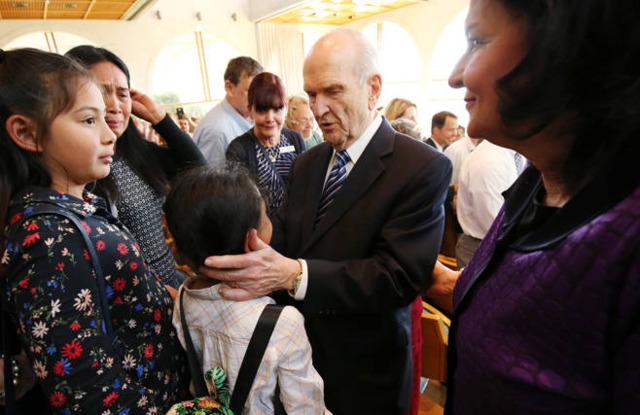 It's been a busy year for President Russell M. Nelson, who in his first year as prophet-president of The Church of Jesus Christ of Latter-day Saints has traveled to 18 different countries around the world and touched the lives of millions of Latter-day Saints through his words and actions.

As Sister Wendy Nelson said upon completing their first world tour in April, "We don’t have time for jet lag."

President Nelson added, "It's a luxury we can't afford."

But despite his busy travel schedule, President Nelson has never failed to take time to minister to individuals and share the love of Christ with everyone he encounters.

Promising "there's much more to come" as the Church and gospel continue their restorations, President Nelson said he is looking forward to the future. But before the new year begins, here is a look back at some of the most tender moments the prophet shared with Church members around the world in 2018.

The story behind the photo.

On his first tour, President Nelson returned to the Holy Land and spoke to members at the BYU Jerusalem Center.

Following his address, as he was making his way up the steps of the center's auditorium, a young girl, Ella Bautista, caught the eye of President Nelson. He made his way toward her through the aisle. When he reached her, he bent down, placed his hands tenderly on the back of her head and looked into her eyes.

“We will never forget this moment and this day,” said Ella's father, John Rey.

Hours earlier, Ella had boldly declared the prophet would greet her. No one could have guessed just how personal that greeting would be and how much it would mean to Ella and her family.

When an Argentine reporter, Sergio Rubin, asked President Nelson during his South America tour in October if the Church excludes women, the prophet redirected the reporter's question by saying, “Well, you should talk to a woman about that.”

He then turned to Sheri Dew, executive vice president of Deseret Management Corporation, the CEO of Deseret Book Company and former Relief Society general presidency member and said, "Can you help with this answer about the role of women in the Church?"

Describing the interview in a Church News article, Church News editor Sarah Jane Weaver wrote, "I will never forget the way President Nelson watched as Sister Dew answered Mr. Rubin’s question. It was a look that reflected gratitude and trust for all Latter-day Saint women."