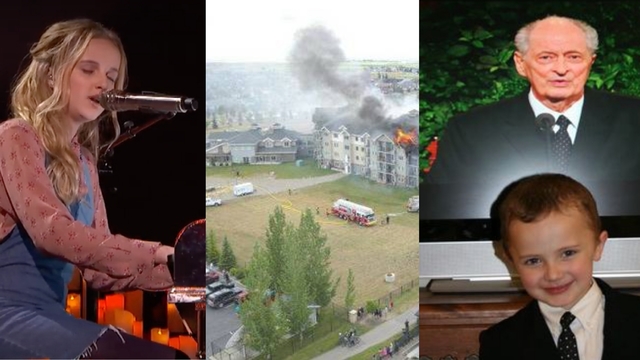 It's that time again. As we straddle the fence between 2017 and 2018 and look forward to the fresh possibilities of the next 12 months, let's take a moment to look back and savor those moments that touched our hearts and renewed our faith in 2017. As we review beloved Mormon moments from this year, we encourage you to reflect on touching events from your own life and use the gratitude and conviction that follows to catapult you into the new year.

America's Got Talent Teen's Faith and Courage During Father's Cancer

This year, LDS 13-year-old Evie Clair touched us with her musical talent as she appeared on America's Got Talent, even making it to the finals. What touched us even more, however, was the faith and courage she displayed both on and off the stage during her father's losing battle with colon cancer.

► You'll also like: The Unforgettable Ways Evie Clair Has Shared Her Faith on America's Got Talent

Each of Evie's musical performances was dedicated to her dad. After her performance of "Wings" by Birdie, in which she both sang and played the piano, Howie Mandell said, “You’re living through a story I think all of America can relate to. We need strength, we need heart, and that’s all the things I heard from you. . . . You make me speechless.”

Even after the devastating loss of her father, Evie continued to perform, saying on the show, “My dad taught me after I started something to always finish it. That’s why I’m fighting to the end, just like he did.”

She posted a photo of her father's funeral on Facebook with the testimony, "Families are forever." Evie further testified of this in an interview after her final performance. Her mom wrote on their family blog, "She said in an interview that he was out there on that stage with her and I believe he was."

In addition, Evie quietly lived her faith through both her father's fight with cancer and the pressures of show business. Her mother further wrote, "The whole staff here at America’s Got Talent is now well versed in all things Evie Clair. They know she has special dress standards and that she needs Sunday mornings off for church."

Mormon Life Year In Review Apostles Miracles ServiceYear In Review,Apostles,Miracles,Service,Mormon Life
Comments and feedback can be sent to feedback@ldsliving.com