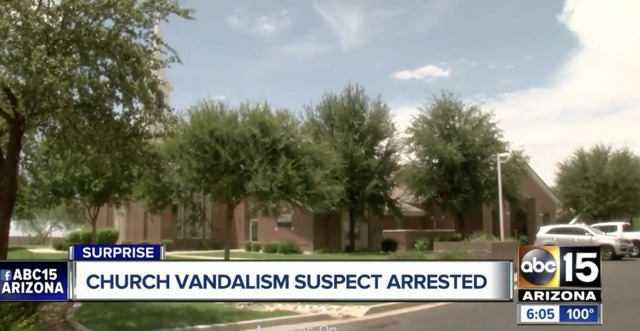 Police in Surprise, Arizona, have arrested a 15-year-old boy after he vandalized a local LDS meetinghouse.

A security camera caught the teen in action as he vandalized the meetinghouse near Sarival Avenue and Greenway Road early Sunday morning, according to abc15.com.

Among other acts of vandalism, the teen changed one sign to say, "heretics welcome" and spray painted "Doesn't God hate gay" on the side of the meetinghouse.

According to abc15.com, the graffiti was cleaned off the building on Monday. A Church spokesman also told ABC 15 that, "Church members feel saddened about what happened, and they realize people have differences of opinion. Even so, they try to love everyone," according to abc15.com.

They also noted that the boy's father apologized for the vandalism.

Read the rest of this story at abc15.com