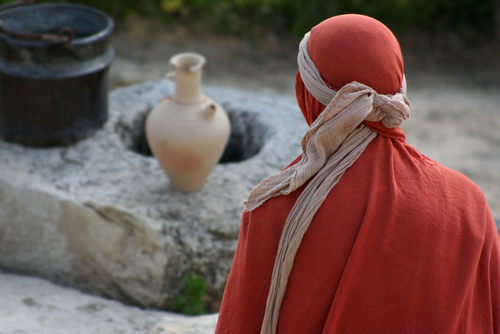 Studies of the Old Testament usually focus on God’s dealings with His prophets, but the God of Abraham, Isaac, and Jacob is also the God of Sarah, Rebekah, and Leah. The wives of the patriarchs offer powerful examples of righteous living in difficult times.

Noted historian Paul Johnson has written, “One of the most remarkable facts about the Bible—in some ways the most remarkable fact—is that it is history with the women left in. . . . From the very beginning, women are part of the Bible story, acting, reacting, talking, scheming, suffering, and comforting.” This is especially true in the book of Genesis, where women often stand at the center of the stories, facing dilemmas and making choices that influence future generations in powerful ways. Here are three of their stories.

Like many women, Sarah—or Sarai, as she was originally named—knew the heartbreak of barrenness. This is hard enough for any woman to bear, but for the wife of a prophet who has been promised that his posterity would be as “the stars of the sky,” it was spiritually confusing as well (Hebrews 11:12). Why was this blessing being withheld from them? Sarai knew that Abram had been foreordained as the “father of many nations” (Genesis 17:4). Naturally, she believed that this prophetic blessing extended to her as his wife. For 60 years she waited to have a child. Finally, when she believed that her childbearing years were ended, Sarai urged her husband to take the Egyptian bondwoman, Hagar, as a second wife and have children through her.

Some have suggested that Sarah acted hastily and with poor judgment when she gave Hagar to Abraham as his wife. Shouldn’t she have had enough faith to wait? But the events that occurred after the birth of Hagar’s son Ishmael confirm that Sarah’s plan was no mistake; it was a test and a sacrifice for Sarai and part of God’s plan for bringing Abram’s posterity into the world. In fact, the apostle Paul said of her, “Through faith also Sara herself received strength to conceive seed, and was delivered of a child when she was past age, because she judged him faithful who had promised” (Hebrews 11:11).

It wasn’t until after this test of her faith that Sarai became pregnant and the Abrahamic covenant was confirmed. Beneath the stars that would number Abram’s posterity, Abram and Sarai again heard the voice of God. Along with the blessings of priesthood, posterity, and prosperity, Abram and Sarai were given new names. Abram would become Abraham, and Sarai would become Sarah. At first glance, these changes seem almost insignificant respellings of their names; God simply added a breathy syllable with the letter “H.” But it was a most significant syllable indeed. In Hebrew, the name “Jehovah” is “Yahweh.” Spelled without any vowels: YHWH. It’s pronounced like a sigh, like the very breath of life. In changing their names to Abraham and Sarah, God had endowed them with both His spirit and His name.

Sarah willingly sacrificed her own peace and comfort to assure her husband’s posterity. Her faith was rewarded with the blessing of motherhood. She earned the name of Sarah, which means “princess,” because she possessed the nobility of a queen.

Rebekah is another matriarch of the Old Testament who left a comfortable home, endured years of barrenness, and exhibited strong personal faith as she sought the Lord’s guidance regarding her family.

Rebekah turned to the Lord for guidance throughout her life. When she was troubled during her pregnancy because the babies “struggled together within her,” she “went to inquire of the Lord” personally and privately (Genesis 25:22). The Lord responded with a powerful revelation: “Two nations are in thy womb, and two manner of people shall be separated from thy bowels; and the one people shall be stronger than the other people, and the elder shall serve the younger” (Genesis 25:23).

Like Mary, who “pondered [these things] in her heart” (Luke 2:19), when Rebekah was told the mission of her son, she pondered the profound answer to her personal prayer. When it became apparent that Isaac was planning to bestow a blessing upon their elder son, Esau, Rebekah knew the time had come to help the Lord fulfill the answer He had given her. Guided by that personal revelation, which defied traditions of the time, she acted quickly and confidently to ensure that Isaac would give the blessing to the younger son without telling her husband, the prophet, what to say. Disguising Jacob to appear like Esau, she sent Jacob into the tent of his father, where Isaac pronounced, “God give thee the dew of heaven, and the fatness of the earth . . .: Let people serve thee, and nations bow down to thee: be lord over thy brethren, and let thy mother’s sons bow down to thee” (Genesis 27:28–29).

Rebekah loved and respected her husband, a man of great faith and obedience. But time and old age had clouded Isaac’s eyes (see Genesis 27:1). Rebekah felt prompted to guide her husband in the right direction. And it was right. Although Isaac “trembled” when he realized he had given the blessing to his younger son, he felt the confirmation of the Spirit as he proclaimed, “Yea, and he shall be blessed” (Genesis 27:33).

The power of personal prayer is available to all who humbly seek it. Eliezer was a gentile from Damascus when he was sent to secure a bride for Isaac, but he prayed to the God of his master, Abraham, for guidance and received an answer so profoundly detailed that he bore testimony of it the rest of his life. Isaac and Rebekah prayed together and individually for the Lord to guide them and bless their family. As Jacob left home to start a new life, he followed the example of his parents and turned to the Lord in prayer. We too can learn the power of prayer from the example of Rebekah.

Leah is another wife of a biblical prophet whose story offers comfort and guidance to modern women. As wives of the patriarchs, Sarah, Rebekah, and Leah would share in the honor and blessing of the Abrahamic covenant. Yet Leah’s story begins with rejection and sorrow. She endured rivalry with her sister, indifference from her husband, and waywardness in her children before she found the peace that comes from turning to the Lord.

As Jacob entered Haran, he fell in love with Rachel, the beautiful young daughter of his mother’s brother, Laban. But Laban, determined to follow the custom of having the eldest daughter marry first, switched daughters at the wedding. Jacob had worked seven years for Rachel, but he woke up with Leah.

Jacob, feeling understandably betrayed, loved “Rachel more than Leah. . . .And when the Lord saw that Leah was hated, he opened her womb: but Rachel was barren” (Genesis 29:30–31). This would be the source of bitter rivalry and anguished sorrow for many years. The sisters became cold to one another as they competed for the affection of their husband and desired to have children. This rivalry affected their children as well, and as they grew, many of Leah’s children became wayward. What pain and sorrow she must have felt!

The naming of Leah’s children offers a glimpse into how she dealt with this sorrow. At first she hoped to change her husband. She named her firstborn Reuben, which means “Look, a son,” and said, “Surely the Lord hath looked upon my affliction; now therefore my husband will love me.” After she named Simeon, which means “hearing,” she said, “Because the Lord hath heard that I was hated, he hath therefore given me this son also.” When naming Levi, which means “joined” or “pledged,” she again voiced her hope that her husband would change: “Now this time will my husband be joined unto me, because I have born him three sons.” Finally, Leah began to turn toward the Lord for comfort and strength, and she found both. After the birth of Judah, whose name means “praise,” she said, “Now will I praise the Lord.” When Gad and Asher were born to Leah’s handmade, Zilpah, Leah named them Gad, meaning “good fortune,” and Asher, meaning “blessed,” and said, “Happy am I, for the daughters will call me blessed.” With the birth of her final sons, Issachar and Zebulon, whose names mean “recompense” and “exalted abode,” Leah finally saw the blessings in her life and acknowledged, “God hath endued me with a good dowry.” The name of her daughter, Dinah (which means “justice”), indicates that she felt the Lord had dealt justly with her after all (Genesis 29:32–30:20). In sum, as Leah drew closer to the Lord, she felt Him drawing closer to her, and it changed her life. Gratitude overcame self-pity.

Jacob also helped to heal the rift between his two wives by instituting the practice of family councils. When the Lord said to Jacob, “Return unto the land of thy fathers, and to thy kindred; and I will be with thee” (Genesis 31:3), Jacob didn’t simply tell his wives to pack up. Instead, he “called Rachel and Leah to the field” and explained the situation to them. After listening, they responded together, “whatsoever God hath said unto thee, do” (Genesis 31:4, 16). This family council had a powerful effect upon the sisters. Later generations would praise them, saying, “the Lord make the woman that is come into thine house like Rachel and like Leah, which two did build the house of Israel” (Ruth 4:11). Likewise, their sons would eventually heal their rivalry and reunite in Egypt (Genesis 42–45).

The God of Abraham, Isaac, and Jacob is indeed the God of Sarah, Rebekah, and Leah as well. As we begin our study of the Old Testament in Gospel Doctrine classes in 2018, let us remember to include a close study of the remarkable wives of these biblical patriarchs.

Matriarchs of the Messiah is the first book to focus entirely on the dozen women who are identified in the Bible as maternal ancestors of Jesus Christ. The list includes the wives of Abraham, Isaac, and Jacob, but it also includes cultural outsiders like Tamar, Rahab, Ruth, and Bathsheba who were grafted into the lineage of the Messiah through marriage and motherhood. Often these women are presented as tricksters and temptresses, but as this well-documented book makes clear, they were valiant, courageous problem-solvers determined to do what was right for their posterity.