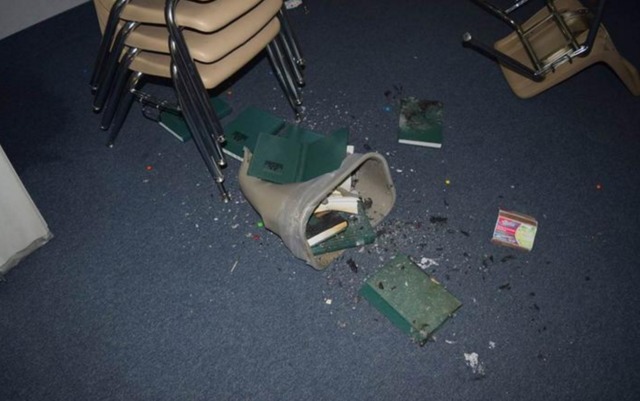 Teen Vandals Cause $20K in Damage to Church Building in Utah

Two brothers, 13 and 14 years old, and another 14-year-old boy were arrested in Payson, Utah, after allegedly causing over $20,000 damage to an LDS church in Elk Ridge after 9 p.m. on Sunday evening, according to the Utah County Sheriff's Office.

The teenagers, all three of whom eventually confessed to causing the damage, reportedly emptied three fire extinguishers, covering the church with chemicals. They also allegedly threw hymnbooks through ceiling tiles, lit two fires inside trash cans using hymnbooks and papers, and stole candy, food, pens, and pencils from the church house.

One neighbor who lived near the church also reported several teens dumping garbage on his lawn that same night.

A woman found the damage early Monday morning when she arrived at the meetinghouse to practice the organ and called the police.

"Evidence at the scene clearly connected these boys to the damage done to the building. One of the boys had singed hair still stuck to his forehead, apparently from the fires lit in the garbage cans," Utah County Sheriff's Sgt. Spencer Cannon told the Deseret News. "The boys also had powder from the fire extinguishers on their clothing and on their bodies."

The boys were booked into the Slate Canyon Youth Detention Center in Provo on suspicion of burglary, reckless burning, criminal mischief, and theft. One of the 14-year-old boys, who originally lied to police officers and gave a false name, is also being charged with giving false information to a police officer.

Lead image from the Daily Herald.