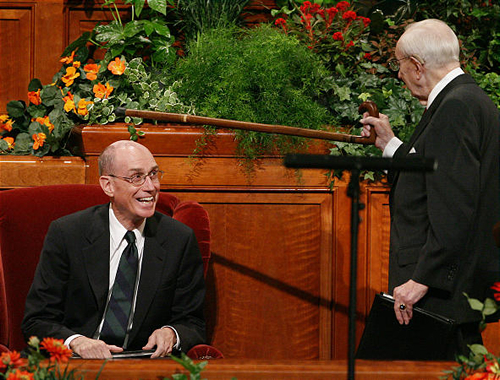 5 Times President Hinckley Made Us Laugh Out Loud

We can learn a lot from former prophet President Gordon B. Hinckley. Among many traits he characterized, he exemplified a life full of positivity and good humor. The following is a compilation of some of funny moments and life lessons we won’t forget.

During the afternoon session of October 1993 general conference, President Hinckley apologized for how warm it was in the Tabernacle before quickly turning it into a humorous comment on repentance:

2. The Barrel of Bricks

Attempting to demonstrate how many times in life we cause ourselves problems from not looking ahead, President Hinckley relayed the comical story of a repair man's experience with a barrel of bricks that fell off the roof.

In October 2007, as President Eyring took his new seat at the front of the Conference Center after being sustained as a counselor in the First Presidency, President Hinckley walked from the pulpit and lovingly "knighted" him, tapping him on the head with his cane.

In one of President Hinckley's final testimonies in general conference, he starts by commenting that he feels like the wind is blowing him like the "last leaf on the tree" before inspiring the audience into laughter with the statement, "Some of you may go before I do."

View the video of his conference address on lds.org and listen to his humorous statements in the first minute of the video.

5. Challenging Elder Nelson to a Duel

President Hinckley knew how to appropriately use humor when a serious room needed lightening. After a particularly glowing talk by Elder Russell M. Nelson exemplifying President Hinckley's personal spiritual development, the prophet challenged Elder Nelson to a duel. "Brother Nelson's right when he said no one is told what to talk about in these meetings," he joked. "He's taken an extreme liberty. I challenge him to a duel down in the basement of the Tabernacle right after this meeting." Later, during the close of the conference, President Hinckley said, "Brother Nelson, I've repented. Thanks very much for your kind words. We'll postpone the duel."

President Hinckley's wife, Marjorie, was also full of good humor. In this video from a 1999 Women's Conference, the wives of the First Presidency shared their wisdom and faith with the women of the Church, and Sister Hinckley shares some good jokes amidst her sincere advice:

Of Standing for Something, President Hinckley said, “I hope to accomplish some good in reaching out to people who may not be interested in our theology but would be interested in our position and stance on some of these values that are of everlasting benefit to this nation and people across the world.” Available at Deseret Book stores or on deseretbook.com.