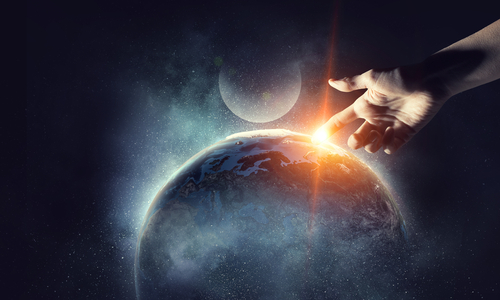 byTerry B. Ball, excerpted from "The Pearl of Great Price Reference Companion" | Jan. 26, 2018

The planning, preparation, and organization of the earth and the life thereon to be a place for God’s children to progress through mortality. The Pearl of Great Price contains two creation accounts, one revealed to Moses (Moses 2:1—3:25; cf. Gen. 1–2), and the other revealed to Abraham (Abr. 3:22—5:21). These two accounts answer important questions about the Creation and help clarify understanding of the creation narrative found in Genesis.

Who created the earth and why?

In a vision, God showed Moses many lands or earths He had created, along with their inhabitants (Moses 1:1–2, 29). Following the remarkable vision, “Moses called upon God” and asked two important questions: first, “Tell me, I pray thee, why these things are so”; and second, “by what thou madest them” (Moses 1:30). In response to the first question about why he created earths, God initially gave a simple answer, “For mine own purpose have I made these things. Here is wisdom and it remaineth in me” (Moses 1:31). In answering Moses’s second question, God’s response suggests that he understood the prophet’s question to be not only “by what” but also “by [whom] thou madest” the earths (Moses 1:30). God answered, “By the word of my power, have I created them, which is mine Only Begotten Son” (Moses 1:32; cf. John 1:1–3, 14; Heb. 1:2). After hearing God’s responses and His restriction of giving “only an account of this earth, and the inhabitants thereof” to Moses, the prophet then said, “Tell me concerning this earth, and the inhabitants thereof, and also the heavens” (Moses 1:35–36). God explained that there are many earths and heavens which have and will come and go as part of his work and glory “to bring to pass the immortality and eternal life of man” (Moses 1:39). He agreed to reveal to Moses more “concerning this earth upon which thou standest” (Moses 1:37–40).

God then specifically commanded Moses to “write the things” which he was about to be told (Moses 1:40;2:1). Moses 2 and 3 contain the record of what God then told the prophet and are parallel to Genesis 1 and 2, though the Moses account is narrated in first person, whereas the Genesis account is told in third person.

The creation account in Abraham likewise addresses the questions of why the earth was created and who created it. In vision, Abraham saw one “that was like unto God,” the premortal Jesus Christ, say to “those who were with him: . . . we will make an earth whereon these [premortal individuals] may dwell; and we will prove them herewith, to see if they will do all things whatsoever the Lord their God shall command them” (Abr. 3:24–25). Christ explained that those “who keep their first estate” and their “second estate,” meaning those who are faithful in both their pre-earth and earth lives, “shall have glory added upon their heads for ever and ever” (Abr. 3:26).

Abraham then saw “the Gods” plan and carry out the creation of the earth (Abr. 4–5).

Although the Genesis account attributes the work of the Creation to “God” rather than “Gods,” there is evidence of more than one God assisting in the work when in the biblical account God declares, “Let us make man in our image” (Gen. 1:26; emphasis added). The Moses account is helpful in identifying to whom God is speaking. “And I, God, said unto mine Only Begotten, which was with me from the beginning: Let us make man in our image” (Moses 2:26; emphasis added; cf. Moses 2:1). That both “male and female” were subsequently created “in the image of the Gods” seems to suggest that both masculine and feminine deities participated in the creation of humankind (Abr. 4:27; cf. Gen. 1:27; Moses 2:27).

Together these revelations to Moses and Abraham teach that the earth was created by the Gods—the Father and Jesus Christ, along with those who assisted them (Abr. 3:24). They further teach that as part of Heavenly Father’s work to bring about immortality and eternal life for His children, He created earth to be a place where they could be tested and prove themselves worthy of eternal glory.

What did the Gods create?

When was the earth created and how long did it take to complete?

The creation accounts make no attempt to identify when the earth was created other than to declare that it occurred “in” or “at the beginning” (Moses 2:1; Abr. 4:1).

Neither do the narratives give detail about how long it took to complete the creation. Like Genesis, the Moses account divides the creative events into “days” (Moses 2:5, 8, 13, 19, 23, 31; cf. Gen. 1:5, 8, 13, 19, 23, 31). “Day” is defined as a period of light and includes an “evening” and a “morning”; “night” is defined as a period of darkness (Moses 2:5; cf. Gen. 1:5). Because the sun is not placed in the heavens until the “fourth day” (Moses 2:14–19; cf. Gen. 1:14–19), however, the term “day” appears to be delineated by something other than sunrises and sunsets. Exactly how long a day of creation was, or even if the days were of equal length, is not made apparent in either Genesis or Moses. The Abraham account clarifies that the Gods called day the time “from the morning until the evening” and night the time “from the evening until morning” (Abr. 4:5) but refers to and summarizes each creative period simply as a “time” (Abr. 4:8, 13, 19, 23, 31). It appears, then, that providing detailed information about when the earth was created or how long the process took is not a primary purpose of the creation narratives.

How was the earth created?

The question of how the earth was created likewise seems to be addressed only in broad, sweeping terms, with very little detail. According to the Moses account God simply spoke and some things came into being (e.g., Moses 2:3, 6, 20, 24); in other instances he more actively “planted,” “formed,” and “made” various forms of life (e.g., Moses 3:7–9, 19, 22). The Abraham narrative uses some additional verbs to explain how the Creation was accomplished. The account indicates that the Gods “organized and formed the heavens and the earth” from already existing “materials” (Abr. 3:24; 4:1).

They subsequently “prepared” and “organized” lights and plant and animal life for the earth (Abr. 4:11–25); man and woman they formed in their “image” and “likeness” (Abr. 4:26–27). As the Gods prepared and organized the earth and its life, they “watched those things which they had ordered until they obeyed” (Abr. 4:18), suggesting the Creation was a process rather than an immediately accomplished event. This somewhat vague and general language seems to imply that providing an exact and detailed step-by-step discussion of how the earth was created is not an important concern of the narratives.

What clarifications do the Pearl of Great Price creation accounts add to the discrepancies in the Genesis creation narrative?

The Moses and Abraham creation accounts offer possible resolutions to long-recognized discrepancies in the Genesis narrative. For example, in the Genesis 1 creation narrative, man and woman are created together, after all the animals have been created (Gen. 1:26–27), but in the Genesis 2 narrative man is created from the dust of the ground, then the animals, and last of all woman (Gen. 2:7, 19–25). Moreover, in the Hebrew of the Genesis 1 account, the creator is consistently identified as Elohim (God), whereas in the Hebrew of the Genesis 2 account the creator is always YHWH Elohim (Lord God). A common explanation for these kinds of discrepancies is that the Genesis text contains two separate accounts of the Creation, written by different authors or coming from different sources that have a different understanding of the process.

The creation account found in the book of Abraham suggests an alternative resolution to the Genesis discrepancies. In Abraham 4, parallel to Genesis 1, a council of Gods appears to be planning the Creation. As they finish the process they declare, “We will do everything that we have said, and organize them” (Abr. 4:31). Abraham 5, corresponding to Genesis 2, then describes how the Gods carried out their plans: “And the Gods came down and formed these the generations of the heavens and of the earth” (Abr. 5:4). Thus the Abraham creation account suggests that the Genesis creation narrative does not contain two different, conflicting versions of the Creation but rather one account of two different parts of the Creation: first, the planning; and second, the carrying out of those plans. The creation account in the book of Moses possibly resolves the discrepancies in a slightly different way, as it appears to transition between the differing accounts of the Creation by explaining that God created all things “spiritually” in heaven before he created them “naturally upon the face of the earth” (Moses 3:5; cf. Gen. 2:5). This transitional observation can be understood in several different ways. It may be suggesting that the first part of the narrative (Moses 2:1—3:3; cf. Gen. 1:1—2:3) is speaking of how God created things “spiritually” in heaven, while the last part of the narrative (Moses 3:4–25; cf. Gen. 2:4–25) is discussing how God created things “naturally” upon the earth (Moses 3:5). Thus rather than containing two conflicting creation accounts, the narrative may be describing or emphasizing two different aspects or parts of the Creation, one accomplished spiritually and the other naturally. However, Moses does not offer much explanation about what it means to create things “spiritually” versus “naturally.” Perhaps the account in the book of Moses of creating things spiritually is analogous to the account in the book of Abraham of the planning of the Creation, while creating things naturally is analogous to the carrying out of the plans as described in Abraham 5. It is also possible that the observation that God created things spiritually in heaven before creating them naturally upon the earth is not intended as a transition between the two differing orders of creation at all but rather as a simple reminder that spirits were created before natural bodies. Regardless of how one understands the passages, it is clear that the Pearl of Great Price offers tenable resolutions to the discrepancies in the Genesis creation account.

What clarifications do the Pearl of Great Price creation accounts add to the biblical account of the creation of man?

The book of Moses adds insight to the meaning of the Genesis declaration that “God created man in his own image” (Gen. 1:27). Moses stated, “In the day that God created man, in the likeness of God made he him; in the image of his own body, male and female, created he them” (Moses 6:8–9; emphasis added). The language clarifies not only that God has a body but also that being created in God’s image is not to be understood only in a figurative sense. Rather, it affirms that man was literally and physically created in the image of God. While it could be concluded that this language indicates God is anthropomorphic (in the shape of man), it would be more precise to conclude that man is theomorphic (in the shape of God). This difference may seem simply semantic and subtle, but the doctrine that derives from the distinction is profound. Because men and women are created in the image of God, because they are literally theomorphic, they are different from all other creations and have a unique relationship to and with the Creator—they are indeed the same species as God and as his offspring have the potential to become like him. Providing a way for humankind to attain that potential, even immortality and eternal life, constitutes God’s work and glory (Moses 1:39).

The creation narratives confirm that this earth was created by a loving Heavenly Father and his Only Begotten Son. They witness that humankind—children of God—are a unique and special creation, separate from all other life. They affirm that men and women are truly created in the image of God and therefore have a special and unique relationship to him. They teach that the earth and all that is in it was created as part of God’s plans and efforts to teach and test his children so that they might gain immortality and eternal life.