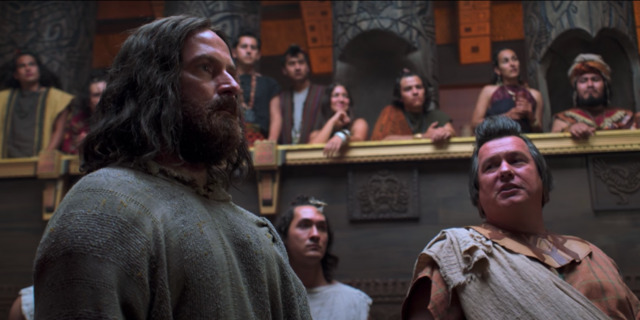 8 Principles We Learn from the Story of Abinadi in This Week's "Come, Follow Me" Reading

Abinadi is the central character of this week’s Come, Follow Me, which is focused on Mosiah 11–17. Below we share eight principles taught in these chapters that you can explore for your lesson:

We hope these topics, in addition to the Come, Follow Me manual, will enhance your understanding of these chapters.

“King Noah was about to free the prophet Abinadi, but an appeal to his pride by his wicked priests sent Abinadi to the flames. (See Mosiah 17:11–12). Herod sorrowed at the request of his wife to behead John the Baptist. But his prideful desire to look good to ‘them which sat with him at meat’ caused him to kill John (Matt. 14:9; see also Mark 6:26).

“Fear of men’s judgment manifests itself in competition for men’s approval. The proud love ‘the praise of men more than the praise of God’ (John 12:42–43). Our motives for the things we do are where the sin is manifest. Jesus said He did ‘always those things’ that pleased God (John 8:29). Would we not do well to have the pleasing of God as our motive rather than to try to elevate ourselves above our brother and outdo another?”

Elder Robert D. Hales of the Quorum of the Twelve Apostles spoke of Abinadi’s courage in his October 2008 remarks, “Christian Courage: The Price of Discipleship.”

“In the Book of Mormon, the prophet Abinadi was bound and brought before the evil King Noah. Although the king vigorously opposed Abinadi and eventually sentenced him to death, Abinadi boldly taught the gospel and bore his testimony anyway. Because Abinadi took advantage of that opportunity, a priest named Alma was converted to the gospel and brought many souls unto Christ. The courage of Abinadi and Alma was Christian courage.”

His talk shares other examples of Christian courage, including that sometimes it takes courage to say nothing at all.

When we talk about these chapters in Mosiah, we frequently focus on the main character of Abinadi and sometimes neglect the secondary character of Alma. After watching the Book of Mormon video that corresponds to these chapters, LDS Living author Jannalee Sandau wrote:

“Whenever I have read the story of Abinadi, Alma’s part has been rather small in my mind, up until the end when he somewhat unexpectedly defends Abinadi. Not until watching the video did it occur to me how involved Alma actually is in Abinadi’s entire story. I loved the way you really get to watch Alma’s transformation in the video, as you see him gathering with others in King Noah’s court, becoming a priest, fighting against Abinadi’s words, and ultimately beginning to think there might be some truth to them, until finally he defends the prophet and runs for his life. He is then shown later recording and teaching Abinadi’s words to the people in secret.”

You can watch the video below or read more thoughts from Sandau, including takeaways from the actor who portrayed Abinadi, here.

What is the power of pure testimony? President M. Russell Ballard gives several examples in his October 2004 address, “Pure Testimony.”

“Remember also Abinadi and Alma. Abinadi infuriated wicked King Noah with his courageous testimony of the Lord Jesus Christ. Eventually this great missionary offered the ultimate sacrifice for his witness and faith but not before his pure testimony touched one believing heart. Alma, one of King Noah’s priests, ‘repented of his sins …, [accepted Jesus as the Christ,] and went about privately among the people, and began to teach the words of Abinadi’ (Mosiah 18:1). Many were converted to the gospel of Jesus Christ as a direct result of Abinadi’s powerfully borne testimony of the Savior, believed by one soul, Alma.”

President Ballard testifies that real testimony has the power to change lives. He explains, “Clear declaration of truth makes a difference in people’s lives. That is what changes hearts. That is what the Holy Ghost can confirm in the hearts of God’s children.”

“The story of Abinadi and the story of the Exodus are remarkably similar,” an article on Book of Mormon Central reads. “From reciting the Ten Commandments, to faces shining with the power of God, Abinadi and Moses have a lot in common. These similarities can help us recognize God’s loyalty to His covenants, and can even help us learn about the Atonement of Jesus Christ.”

Book of Mormon Central then discusses:

Read the full article on Book of Mormon Central here.

In this week’s episode of the Sunday on Monday, the study group breaks down the qualifications to become Christ’s seed found in Mosiah 15:10–11:

Host Tammy Uzelac Hall shares a quote from Hugh Nibley about progress for those who feel they may be struggling to meet all of the qualifications:

“So we must be put on probation if we are going to make it at all. That's the word the Book of Mormon uses throughout, ‘Therefore this life became a state of probation.’ We are being tested every minute we are here to see how we will do. Every minute you have to make a decision, and it's never too late to make the right decision, as Ezek. 38 says. If you have made the right decision every day of your life and suddenly decide to make the wrong decision, then you are on the way down. Then you are wicked. If you have been wicked and made wrong decisions every day of your life and finally decide to make the right ones, then you are righteous no matter what you have done in the past. It depends not on how high or low you are on the stairway but in which direction you are facing. If you are facing down, your condition is lamentable. If you are facing up, your condition is joyful-even though you may be on the bottom step facing up. It's the direction you are facing. We are subject to this test here. We haven't qualified for it [the higher life], so we are put on this time of probation to determine who, if any, can come up to the required standards. Can we do that?” (Hugh Nibley, Teachings of the Book of Mormon, Volume 2, Pg. 80)

“If you're facing upwards, you're doing okay,” Hall says in the episode. “Even if you're on the bottom rung of that ladder, he absolutely understands where you are on that ladder and as his seed he is going to continually feed you and nourish you.”

In this week's episode of "Don't Miss This," Emily Belle Freeman and David Butler discuss five steps we learn from Abinadi for when someone questions and accuses your faith:

“That might be the most powerful thing Abinadi does in his entire sermon is that testifying of Christ,” Freeman said in the video.

Butler explained how sermons about Christ, like Abinadi’s, add to the overall power of the Book of Mormon.

In April 2019 general conference, Elder Ronald A. Rasband titled his remarks “Build a Fortress of Spirituality and Protection.” So how do we build this fortress? Elder Rasband spoke of living the gospel of Jesus Christ, drawing upon the Savior’s Atonement, and pressing forward with faith. He used the example of Abinadi:

“We stand for the truth, as did the prophet Abinadi in the Book of Mormon. Arrested, brought before King Noah and his wicked priests, Abinadi taught the Ten Commandments and preached powerfully that Christ would ‘come down among the children of men, and … redeem his people’ (Mosiah 15:1). He then, with faith deep within him, proclaimed, ‘O God, receive my soul,’ and Abinadi ‘suffered death by fire.’ (Mosiah 17:19-20).”

Elder Rasband spoke of how “our testimonies of the gospel of Jesus Christ, our homes, our families, and our membership in The Church of Jesus Christ of Latter-day Saints will be our personal fortress of protection surrounding us and shielding us from the power of the evil one.”