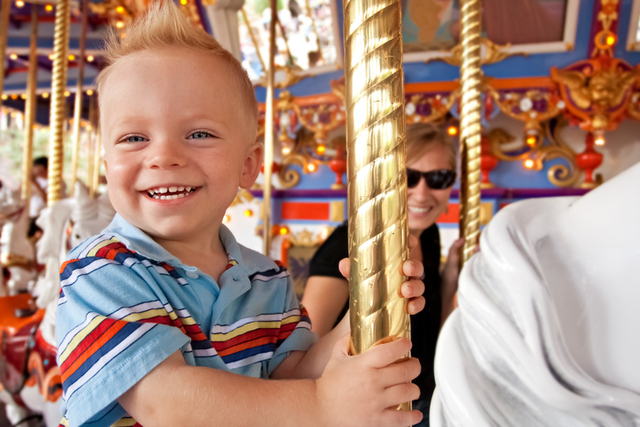 8 Sure-Fire Ways to Spot a Mormon at Disneyland

Short of creating The Tower of King Benjamin or putting missionary name tags on the It’s a Small World dolls and having them sing “Called to Serve,” it’s hard to make Disneyland any more appealing to Mormons. With family-friendly stories, rides, and characters and a positive, clean-fun kind of atmosphere, it sounds a bit like a Latter-day Saint haven.

Yes, Mormons love their Disney vacations. And whether you’re a Latter-day Saint or not, there are some telltale signs to look for if you're trying to spot a Mormon in the “happiest place on earth.” (Keep in mind that these are generally, but not always, some good indicators, so if you plan on starting up a conversation, it never hurts to have a backup response ready just in case!)

If you’re riding the teacups and you start to think you’re seeing double, it could just mean you’ve spotted a Mormon family of look-alikes all riding together. While not every Mormon comes from a large family, there are quite a few that do, and Disneyland is the perfect place to set their imaginations—and their pent-up energy—free. You may also most notably spot these Mormon families:

It matters not if the weather is 100° F! If you see a woman with a colored tank under a t-shirt or a man with a white shirt under his polo, chances are you might have spotted a fellow Latter-day Saint. We Mormons take modesty seriously, even if it means melting in the heat. From knee-length shorts to shirts with sleeves, Mormons stand out for their unique apparel, especially in the hot summer weather of Southern California!

3. BYU Logos on Everything

Speaking of clothing choices, when it comes to Latter-day Saints, “BYU” and “Mormon” are often viewed synonymously. From hats to shirts to lanyards, if it’s blue and white or has a cougar, you have likely spotted a fellow member. (We bet there are a dozen that just walked through to Adventureland!)

When spending a long day at the happiest place on earth, you’ve got to keep the kiddies well fed! Whether it’s an old-school fanny pack, a stroller stocked with snacks, or a backpack-toting mom, when there are enough kids to merit a food-carrying item, you might just have run into an LDS family.

You may have thought you spotted a Mormon family when you saw all the kids, but the clincher is often matching t-shirts. Latter-day Saints are big on family, and that includes family reunions. Usually sporting shirts in some variety of neon with a cliche phrase or unfamiliar picture or logo emblazoned on the back, these families will probably make you jealous that you don't have a matching shirt. Though not all families with matching shirts are Mormon, be sure to watch out for phrases like “Families are Forever” or family trees that might tip you off.

You know what we mean. You’re standing in line to get on Splash Mountain when you suddenly notice the BYU hat-wearing guy up the line in front of you turn around and start speaking Mandarin, Portuguese, or Maylay. While I know there are other ways to learn other languages, Latter-day Saints have a unique proclivity for it, as many of them serve foreign-speaking missions and are happy to practice this skill when given the chance.

While trendy stackable rings and fashion necklaces grace the fingers and necks of some, decorative CTR rings and Young Women medallions are often incorporated into the outfits of the Latter-day Saints. Mormon Olympian Noelle Pikus-Pace and LDS convert and singer Gladys Knight are some of the most famous examples of this practice. So the next time you think you've spotted a fellow Mormon roaming around Mickey’s home turf, you may want to try doing a quick “ring check!”

► You'll also like: 10 unique and Beautiful CTR Rings Worth Wearing Every Day

You can tell a lot by a person’s wardrobe. Or in this case, keys. Yes, some telltale signs of a Mormon at Disneyland may just be hanging from a pocket or a purse. EFY, or Especially for Youth—a sort of spiritual LDS summer camp for young teens—generally provides its participants with a shirt and lanyard featuring that year’s theme. Both are often used long-term by newly-minted teen drivers. BYU, Youth Conference, and other Mormon-themed lanyards may also be solid clues to finding a fellow Mormon.

What other clues do you use to find other members of the Church in public places? Let us know in the comments below!