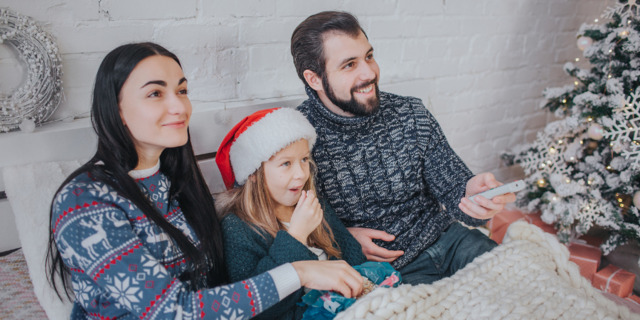 8 virtual Christmas events and concerts you can enjoy from home

The lyrics of the popular Christmas song, “Let It Snow” may take on new meaning in 2020 as we sing, “Oh the weather outside is frightful, but the fire is so delightful. And since we’ve no place to go, let it snow!”

But celebrating the holidays at home doesn’t mean there will be any less Christmas cheer. From seeing the lights at Temple Square to hearing from Church leaders to enjoying musical celebrations, here are eight Christmas events you can enjoy from home this year.

Though visitors won’t be allowed on Temple Square, the lights will still be lit. On Tuesday, December 1, at 6:00 p.m. (MST) sister missionaries will take viewers on a virtual tour of Temple Square and the Christmas lights. Viewers can tune in on ChurchofJesusChrist.org and on the Temple Square Facebook page.

In late October, the Church issued an invitation for Latter-day Saints and friends of other faiths worldwide to submit Christmas video musical performances. These performances will be edited into concerts and broadcast nearly every night from December 2–23 at 6:00 p.m. (MST) on ChurchofJesusChrist.org.

The First Presidency Christmas Devotional will be broadcast on Sunday, December 6, at 6:00 p.m. (MST). General Authorities and General Officers of the Church will share messages alongside music from previous Christmas devotionals by The Tabernacle Choir and Orchestra at Temple Square. View the livestream at ChurchofJesusChrist.org.

December 6: Christmas Under the Stars with Lauren Daigle

The BYUtv Christmas special, Christmas Under the Stars, returns this year with singer Lauren Daigle. Daigle, known for her hit songs like “You Say” and “Rescue,” will bring her jazz style to classic Christmas songs. The special airs at 7:00 p.m. (MST). Find more information from BYUtv.

Enjoy an evening full of holiday music, storytelling, and plenty of Christmas cheer with Nathan Pacheco, The Bonner Family, and special guest host David Butler. The virtual concert, “A Deseret Book Christmas,” will start streaming December 11 at 7:00 p.m. (MST). Tickets start at just $10 for the entire household. Click here to get your tickets.

December 13: “Christmas with The Chosen”

This two-hour BYUtv special will air at 6:00 p.m. (MST). The concert will incorporate The Chosen’s holiday-themed pilot episode, “The Shepherd,” alongside a musical tribute to Jesus’ birth filmed at the Jerusalem set in Goshen, Utah. Series creator Dallas Jenkins will host the concert featuring both traditional and original holiday songs performed by a variety of Christian artists including The Piano Guys and the Bonner Family. Find the special on BYUtv.

This sing-a-long will provide not only an opportunity to sing alongside talented musicians, but also provides simple ideas on how to serve during the holiday season. The event premieres on Monday, December 14, at 6:00 p.m. (MST) on the Come Unto Christ Facebook page and YouTube channel.

December 14–25: Christmas with the Tabernacle Choir

The TV special of the Tabernacle Choir and Orchestra at Temple Square’s Christmas concerts in 2019 featuring Kelli O’Hara and Richard Thomas will air on both PBS and BYUtv this holiday season. Air dates and times are as follows:

PBS: 60-minute version of the program

BYUtv: 90-minute version of the program

Celebrate the Christmas season with the Tabernacle Choir and Orchestra at Temple Square as they are joined by Kelli O'Hara, acclaimed Broadway star and frequent performer at the Metropolitan Opera, as well as Emmy Award-winning actor Richard Thomas. The musical selections include charming American folk carols, selections from timeless Broadway productions by Rodgers & Hammerstein, and a breathtaking original composition entitled "Tree of Life," by Mack Wilberg, with a striking stage display. The production features the unparalleled 360-voice choir exulting in the "Hallelujah Chorus" by George Frideric Handel. Richard Thomas also narrates the heartwarming story "Christmas Day in the Morning" by Pearl S. Buck. The CD and DVD are now available at DeseretBook.com.

Coronavirus ChristmasCoronavirus,Christmas,
Comments and feedback can be sent to feedback@ldsliving.com