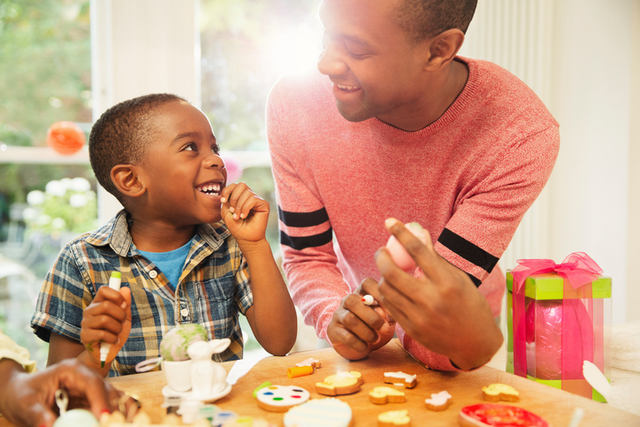 Growing up hunting Easter eggs that my parents masterfully hid around the house, there were always those eggs that as soon as I found them zipped in the couch cushion or tucked into our house plants, I knew exactly what was inside.

They were larger than the other Easter eggs, with a number from one to twelve written neatly in permanent marker on the side—and they were the eggs we always saved until the very end to open.

We'd gather around as a family and unveil their contents one at a time. Each contained a small object and a scripture that detailed the death and resurrection of our Savior. Amidst the family parties, bunny trails, candy, and egg decorating, I will always remember those moments of calm as we took time to read about the One who made eternal life and happiness possible.

The scriptures were short, but I still remember each year finding and learning something new as I stroked the red piece of cloth, the rusting nail, or the rough rope coiled in each egg and listened.

It's a tradition I have done every year of my life—one that I loved as a little girl and one I still love as a wife with no children to help me hunt for Easter eggs. It's also been a wonderful object lesson I've used in Primary and other classes again and again. And it's a breeze to put together.

To create an Easter in an Eggshell, you just need three things:

1. Twelve large Easter eggs. Label them 1 through 12 with a permanent marker. 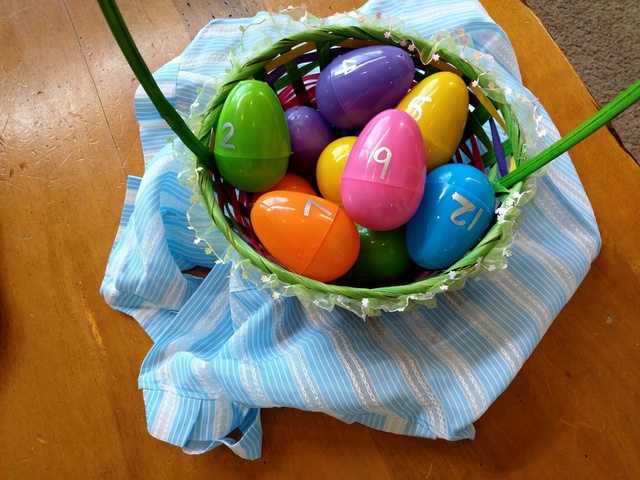 2. One object to represent each of the 12 scriptures. Most of these can be found around the house. Here are the objects I suggest:

1. An olive leaf, a sacrament cup, or another form of small cup

2. A silver dollar or any silver coin

3. A small piece of rope

8. Small rocks or a torn piece of white cloth (a "rent veil")

11. A cinnamon stick or other spice

12. Leave this one empty 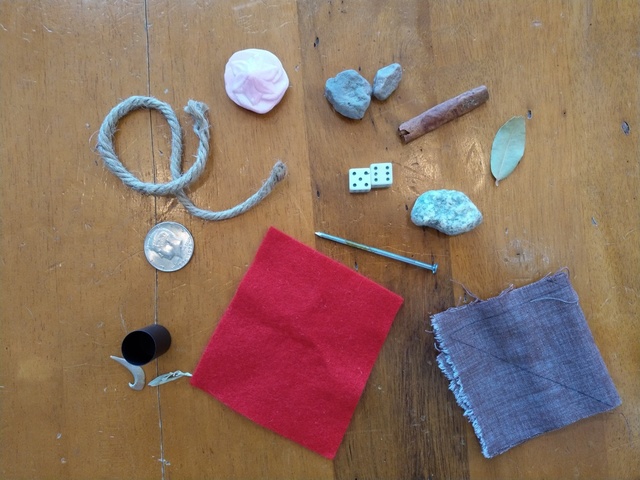 1. Then cometh Jesus with them unto a place called Gethsemane, and saith unto the disciples, Sit ye here, while I go and pray yonder . . . And he went a little further and fell on his face, and prayed saying, O my Father, if it be possible, let this cup pass from me; nevertheless not as I will, but as thou wilt. (Mathew 26: 36, 39)

2. Then one of the twelve, called Judas Iscariot, went unto the chief priests, and said unto them, What will ye give me, and I will deliver him unto you? And they covenanted with him for thirty pieces of silver . . . Now he that betrayed him gave them a sign, saying, Whomsoever I shall kiss, that same is he: hold him fast. And forthwith he came to Jesus, and said, Hail, master; and kissed him. (Matthew 26: 14-15, 48-49)

3. Then came they, and laid hands on Jesus, and took him . . . When the morning was come, all the chief priests and elders of the people took council against Jesus to put him to death: And when they had bound him, they led him away and delivered him to Pontius Pilate the Governor. (Matthew 26: 50; 27: 1-2)

4. When Pilate saw that he could prevail nothing, but rather a tumult was made, he took water, and washed his hands before the multitude, saying, I am innocent of the blood of this just person: see ye to it. Then answered all the people and said, His blood be on us and on our children. Then released he Barabbas unto them: and when he had scourged Jesus, he delivered him to be crucified. (Matthew 27:24-26)

5. And they stripped him, and put on him a scarlet robe. And when they had platted a crown of thorns, they put it upon his head, and a reed in his right hand: and they bowed the knee before him, and mocked him, saying, Hail King of the Jews! And they spit upon him and took the reed, and smote him on the head. (Matthew 27: 28-30)

6. And after they had mocked him, they took the robe off from him, and put his own raiment on him, and led him away to crucify him. And as they came out, they found a man of Cyrene, Simon by name: him they compelled to bear his cross. (Matthew 27: 31-32). And they nailed him to the cross.

7. Then said Jesus, Father, forgive them; for they know not what they do. (Luke 23:34) And they crucified him, and parted his garments, casting lots: that it might be fulfilled which was spoken by the prophet . . . and sitting down they watched him there; And set up over his head his accusation written, THIS IS JESUS THE KING OF THE JEWS. (Matthew 27:35-38)

8. And when Jesus had cried with a loud voice, he said, Father, into thy hands I commend my spirit: and having said thus, he gave up the ghost (Luke 23: 46). And, behold, the veil of the temple was rent in twain from the top to the bottom; and the earth did quake, and the rocks rent . . . Now when the centurion, and they that were with him, watching Jesus, saw the earthquake, and those things that were done, they feared greatly, saying, Truly this was the son of God. (Matthew 27: 46, 50-51, 54)

9. Then Joseph, a rich man, went to Pilate, and begged the body of Jesus. Then Pilate commanded the body to be delivered. And when Joseph had taken the body he wrapped it in clean linen cloth, and laid it in his own new tomb, which he had hewn out in the rock . . . (Matthew 27: 58-60)

10. And he rolled a great stone to the door of the sepulcher and departed . . . Now . . . the chief priests and Pharisees came together unto Pilate, saying, Sir, we remember that that deceiver said, while he was yet alive, After three days I will rise again. Command therefore that the sepulcher be made sure. . . Pilate said unto them, Ye have a watch: go your way, make it as sure as ye can. (Matthew 27: 60-66)

11. And when the Sabbath was past, Mary Magdalene, and Mary, the mother of James, and Salome, had brought sweet spices, that they might come and anoint him. And, behold, there was a great earthquake: for the angel of the Lord descended from heaven, and came and rolled back the stone from the door, and sat upon it. And the angel . . . said unto the women, Fear not ye: for I know that ye seek Jesus, which was crucified. (Matthew 28: 2, 5)

Once you've gathered all your supplies, cut out the scripture, find its corresponding object, and put both in an egg labeled with the same number as the scripture. I hope you enjoy this fun Easter tradition as much as me and my family! 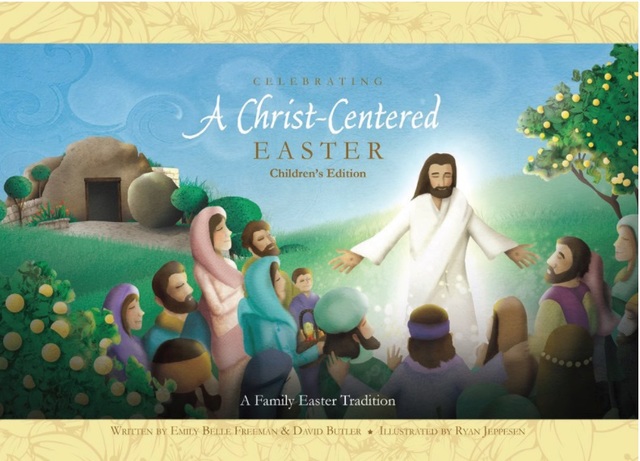 Discover how the people around Jesus during the week of His Crucifixion and Resurrection can lead your family closer to Christ this Easter season. This children's edition of Celebrating a Christ-Centered Easter will guide you through seven meaningful traditions inspired by the people closest to the Savior during His holy week. These simple experiences are not meant to add chores or stress to a reverent holiday season but to offer something different. They will give your family an opportunity to slow down from the candy and egg hunts and instead spend time reflecting on the Savior's ultimate sacrifice and triumphant Resurrection.