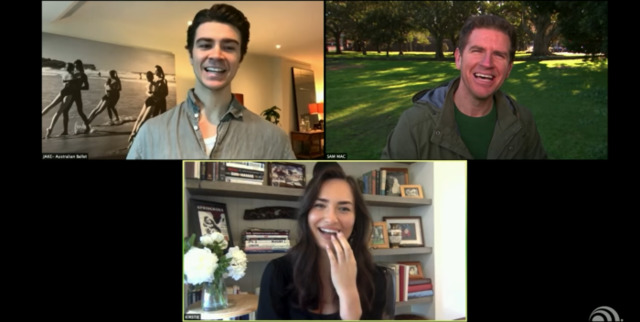 A love beyond borders: The touching story of how a Latter-day Saint Australian ballet dancer fell in love and then proposed on national TV

Kirstie Stevens of Queensland, Australia, had perhaps the best surprise of her life when her boyfriend, Jake Mangakahia, proposed to her on live national television. The couple had been separated because of coronavirus lockdowns, but Mangakahia wasn’t going to let that stop him from proposing to the woman he believes God led him to.

After briefly discussing their separation, the newscaster announced Mangakahia had something he needed to say. Moments later he was down on one knee.

“I love everything about you . . . your smile, your laugh . . . I can’t help falling in love with you. So Kirstie, I want to share this life with you. Will you marry me?” Mangakahia asked Stevens on live TV.

Mangakahia’s niece and nephew came out from hiding and presented Stevens with an engagement ring. She happily said yes.

The proposal shared by the news station is sweet, but there is much more to the story. Mangakahia and Stevens’s engagement is the result of the Lord lovingly guiding together two young Latter-day Saints who were looking for love but thought they might never find it.

Jake Mangakahia of Queensland, Australia, was living his dream as a professional ballet dancer with the Australian Ballet. After choosing to pause his career and serve a full-time mission in Toronto, Canada, Mangakahia was able to secure a lead role within his first four months back and has been enjoying his position as a soloist in the ballet company since 2018.

► You may also like: From arranged marriage to temple sealing: A different kind of latter-day love story

And yet, he felt something was missing from his life—love. Frequent tours with his ballet company made making friends with other YSA members difficult, let alone finding a romantic connection. By the end of 2019, Mangakahia’s mental health was at an all-time low as he dealt with a nagging anxiety that he would be lonely for a long time—maybe even his whole life.

Little did Mangakahia know then that in just one year’s time, a seemingly odd piece of advice from a Church leader and the Lord’s guiding hand would lead him to propose to the girl of his dreams.

“If you were to tell me in June that I would be proposing to a girl I actually loved on national television, I would have laughed and told you to go away. It is truly a miracle that Kirstie is in my life for many reasons,” he says. 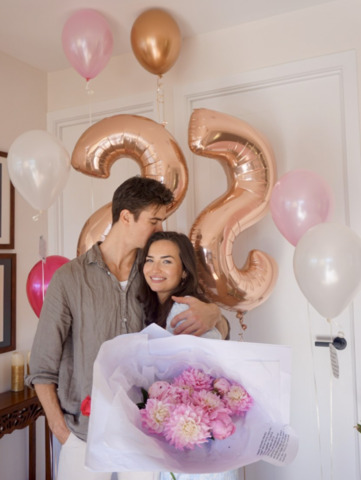 In June of 2019, Mangakahia called his brother Samuel, who attends BYU–Hawaii, to talk about the challenges and anxieties they were both facing in trying to find an eternal companion. Samuel had just come from listening to a talk from a Church leader in which they had mentioned setting a goal for when you want to marry. At first, Mangakahia thought the idea was ridiculous, but he couldn’t get it out of his head. So he decided to give it a shot but added to the goal, determining he wanted not only to marry but to fall in love.

“I made a vision board and in the middle of the vision board was a big heart with . . .  ‘July 2020’ inside it,” Mangakahia says. “I prayed to Heavenly Father and said, ‘I’m not actually expecting to fall in love by July, but I am creating this because I want you to know that I’m trying and that I’m going to do everything I possibly can to achieve this by this time.’”

For the rest of that year, however, Mangakahia was only met with frustration in dating. He kept his vision board up where he could see it, but his anxiety grew, leading to a panic attack in October. Although he was able to work through his feelings and keep moving forward, the nagging fear remained.

In January of 2020, Mangakahia received a call from his mother, who sounded excited. She told him that she and Mangakahia’s father had met a “lovely” girl named Kirstie Stevens while attending a barbecue. Mangakahia’s parents were so impressed by Stevens and how much she and their son had in common, that Mangakahia’s father said he woke up in the middle of the night thinking about it.

Mangakahia was hesitant and humbled at the idea of being set up by his parents, but he knew his goal of love by July was approaching so he decided to give it a try. He was scheduled to perform in Brisbane, and with his parents’ help, he invited Stevens to come and see his ballet.

After the performance, Mangakahia would meet Stevens for the first time at a young single adult game night at a house nearby. He recalled being nervous as he walked in, but the nerves quickly went away.

“I felt so comfortable. I was in shock [thinking] surely this isn’t real. I was trying to convince myself that this is just me really hoping for something to work,” says Mangakahia.

After spending time together that weekend, the couple knew they wanted to see more of each other. Mangakahia had to fly back to Melbourne for work, but he left a letter on Stevens’s car explaining that he’d like to write to her and see her again soon.

“I remember praying and saying, ‘Heavenly Father, this girl is something special. Is she someone I should try to get to know more? And the answer I got was very clear. It said, ‘What are you waiting for?’ So, I acted and as soon as I got that impression, I messaged her . . . and we talked about how we felt,” says Mangakahia.

Two weeks later, Stevens flew to Melbourne and the couple made their relationship official. 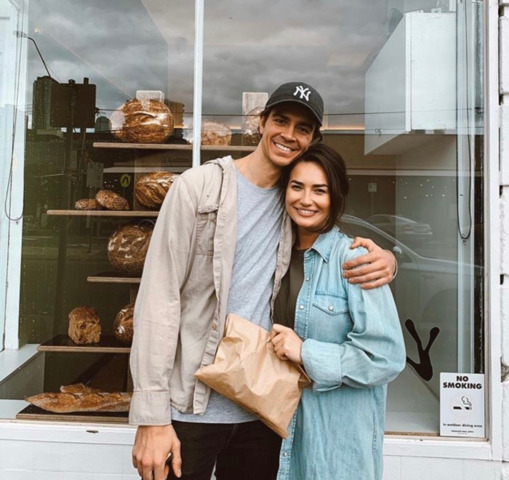 “He was a dream come true. Everything I literally had ever dreamed of and more,” says Stevens. “We were discovering things and would just look at each other in awe, like, ‘Wow, are you for real? Is this real life?’”

Up until this point, Stevens’s dating history had left her frustrated. After returning home from her mission in Washington DC at age 23, her greatest wish was to marry her eternal companion and begin living her dream of being a wife and mother. But when a relationship with a man she had been writing to during her mission didn’t work out like she’d expected, Stevens was devastated.

She traveled to England in the hopes of meeting someone there, but nothing was working out. Stevens then planned to visit the United States. Before she left for America, however, she visited the former directors of the Washington D.C. Temple Visitors’ Center where she had served her mission. The directors were now serving in the Rome Italy Temple, and she had grown close to them and wanted their advice.

► You may also like: How a Couple in Their 90s Found the Gospel and Each Other

“When I was in Rome visiting the Fowlers, through many discussions and a blessing, I knew what I needed to do. I needed to go home to Australia, and I needed to trust more in the Lord,” says Stevens.

Stevens did go home and enrolled in a university, trusting that God would bring her someone when the time was right. Just a few weeks later, she would attend the barbecue where she met Mangakahia’s parents.

Dating during the Coronavirus

After their weekend in Melbourne, Mangakahia was happy, but he was afraid to say he was in love because of the pain dating had caused him in the past. But he would get the chance to see Stevens again and sort out his feelings sooner than he thought. After a few weeks, the COVID-19 virus would cause all of Mangakahia’s dance performances to be canceled, so he flew back home to Queensland. For the next four months, he and Stevens lived within an hour of each other and were able to develop their relationship. 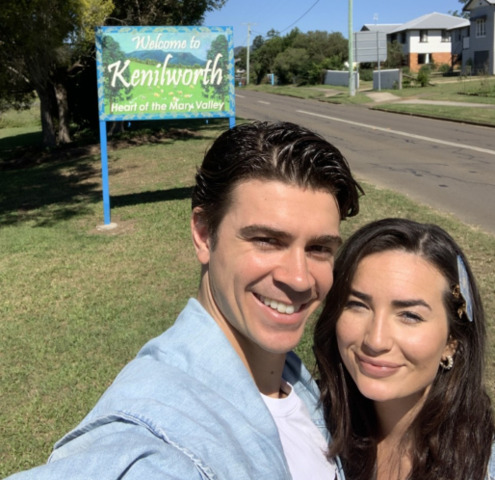 “We went on the most storybook, fairytale kind of dates, often making and creating things. We love to be artistic and use our imagination,” says Stevens. “We spoke of getting married, and that we had finally found each other after many years of searching. And I have no doubt in my mind whatsoever that the Lord was waiting to place us in each other’s paths. It was all His plan and I believe we were created for each other.”

The couple individually received confirmation from Heavenly Father that they were to marry, Stevens says, but as the number of coronavirus cases dropped in Melbourne, Mangakahia had to fly back to resume rehearsals. A few days after he landed, however, cases began to rise again, and strict lockdown measures were put in place.

“We decided to start planning the wedding and sealing for January 2021, but we didn’t know how on earth we would be able to get engaged. All the borders were closed to each state; there was no way we could see each other,” says Stevens.

► You may also like: A change of plans: How the COVID-19 pandemic affected temple sealings for 4 Latter-day Saint couples

Finding a Way to Propose

In his efforts to find a way to propose, Mangakahia called the police to see if he could meet Stevens at the border of their zones, but it wasn’t an option with the lockdown measures in Melbourne. Then he had another idea. Thanks to his career in performance, Mangakahia was able to find a connection to a morning news show who agreed to air his proposal live.

“He's always going above and beyond and doing so much for people. It made sense to me afterward that he would go to that much effort to do something so special and extraordinary for the proposal,” says Stevens.

From the commitment made from his conversation with his brother to the introduction from his parents, Mangakahia knows the Lord has led him through this journey.

“I have been so blessed by family [who] have helped me along the way and [by]. . . believing and knowing that God was directing the little things I did to try,” says Mangakahia. 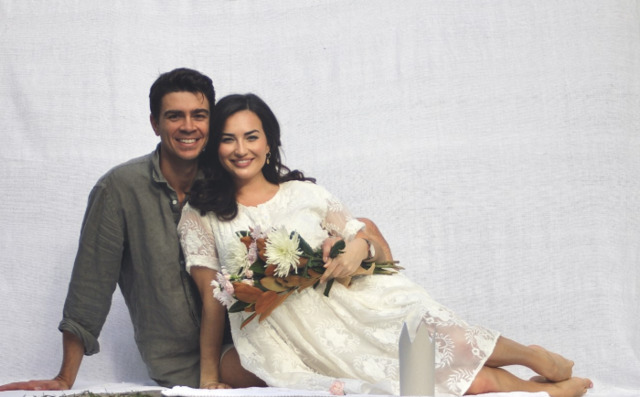 The couple is moving forward with their plans to marry in January 2021. The Brisbane Australia Temple is open for live sealings, but only a limited number of family members can attend. Mangakahia and Stevens are hoping that restrictions are lifted but are looking forward to their wedding regardless.

“All that matters to us now is that we are sealed for time and all eternity and that we can begin our life together! We are so excited and know that big things are in store for us with our careers, the family we will create, and the callings we wish to be a part of in the Church,” says Stevens. “He is the man of my dreams and I know that Heavenly Father has a plan for all His children. Everything happens in His timing.”

► You may also like: 3 adorable Proposal Stories from the Lives of Prophets

Lead image: Screenshot. All other images courtesy of Kirstie Stevens.

Fun Ballet Australia LoveBallet,Australia,Love,Fun
Comments and feedback can be sent to feedback@ldsliving.com