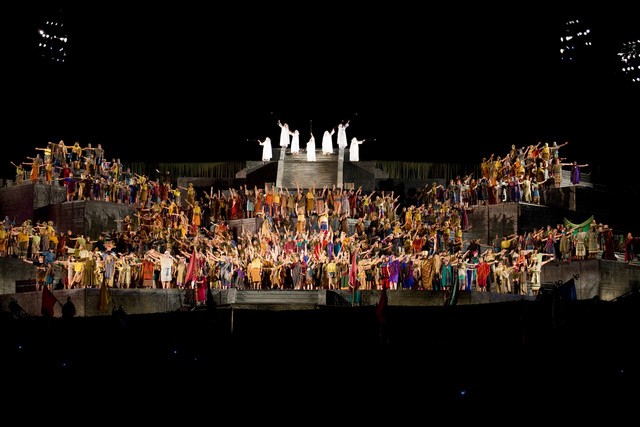 The last glow of daylight disappears as hundreds of costumed Latter-day Saints of all ages excitedly line the aisles of a temporary seating area at the base of New York’s Hill Cumorah. With an opening blast from the trumpets, everyone is cued into action. And the thrill of those several hundred people rushing onto a massive stage on the hill gives you more goosebumps than the chilly night air. Welcome to the Hill Cumorah Pageant. 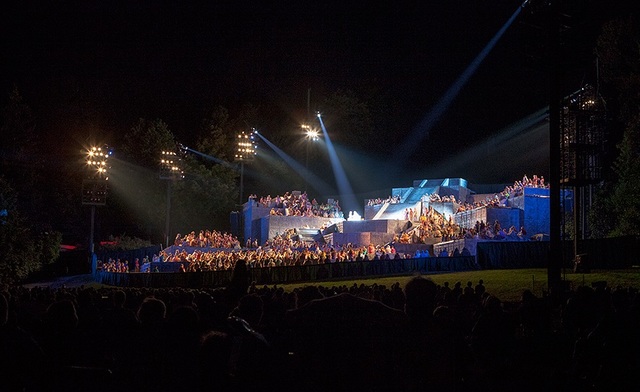 When missionaries from the Eastern States Mission organized an annual “Cumorah Conference” Pioneer Day celebration at the Joseph Smith Farm in the 1920s, they had no idea that their small production would one day become the largest, longest-running Church pageant in the world. Since that modest celebration, the Hill Cumorah Pageant has expanded to a 700+ person cast, a 14,000-foot stage, and thousands of audience members each night—an experience that participants remember as one of the best of their lives.

Every July, the pageant draws huge crowds. But audience members aren’t the only ones who return annually for this incredible spiritual experience. A few families have become familiar faces in the cast over the years. One of these pageant veterans is Sister Marcia Slichta. Slichta has been a member of the pageant cast 10 times since the age of 16.

She recalls her most recent experience in 2014 as one of the sweetest, though, since she was blessed to bring her four children with her. “It was so amazing to go as a mom and watch my children have the same fun and spiritual experience that I had as a teenager,” she says.

But both the Campbells and the Slichtas agree that the pageant is more than just a tradition. It’s a family-bonding experience. 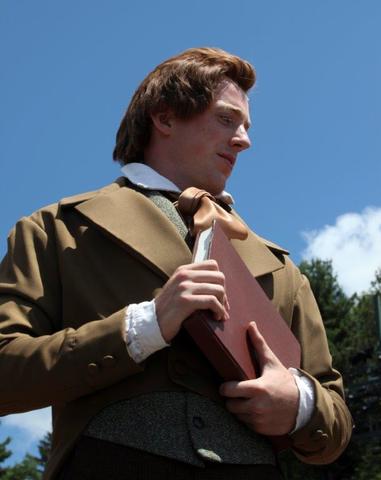 The enthusiasm for participating in the Hill Cumorah Pageant isn’t limited to acting and making friends. There’s also a contagious excitement for doing missionary work. Steve Bean, a Hill Cumorah Visitors’ Center missionary assigned to train pageant cast members, explains, “Six experienced sister missionaries are trained over several weeks on how to teach and motivate the cast members to greet pageant guests and make friends for the Church.” In this way, cast members are set apart as special missionaries for the duration of the pageant and assist the full-time missionaries in gathering referrals, answering questions, and sharing their testimonies of the Book of Mormon.

“My favorite moments are hearing the miracles that happen to everyone,” costume staff member Jackie Walker says. “I love being a pageant missionary.”

For some cast members, being a pageant missionary is a great motivation to serve a full-time mission, while for others, it is the perfect transition back from a mission. Campbell, who had been home for only three days before leaving for the pageant, said, “It was the greatest blessing! I was able to come to a place where the Spirit was so strong.” He continues,