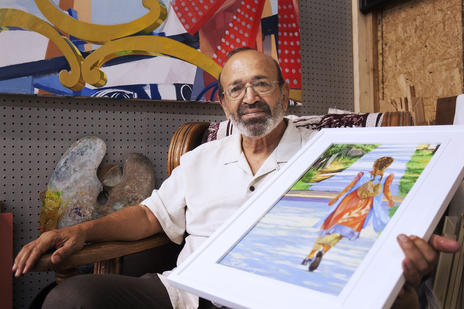 Local painter Salvador Alvarez paints happy pioneers as well as a variety of other subjects. Alvarez’s painting “Joy in the Journey” was shown during President Uchtdorf’s talk at the October 2015 women’s session titled "A Summer With Great-Aunt Rose." He also recently illustrated the book based on that same talk.

“Everybody traded them around until they got the best image of what they looked like,” he said in an interview at his Provo studio. “But they were sincere efforts at portraiture.”

Almost six decades later, Alvarez is still painting—portraits, landscapes and flowers and a happy pioneer image that caught the attention of President Dieter F. Uchtdorf, second counselor in the First Presidency of The Church of Jesus Christ of Latter-day Saints.

“I paint because I want to create some beauty that I leave behind so people know I did the best I could,” Alvarez said in an interview with the Deseret News.

See more beautiful art from Salvador Alvarez and get President Uchtdorf's inspiring parable to own for your own home with A Summer with Great Aunt Rose.