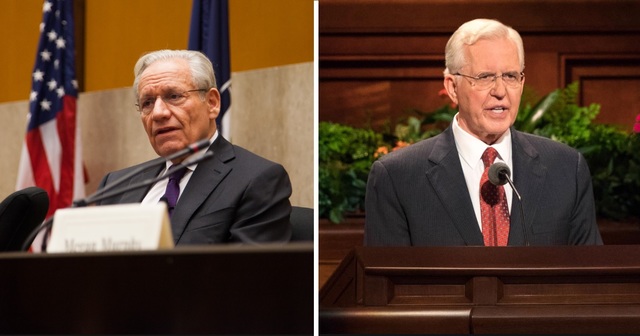 Elder D. Todd Christofferson, who worked as a law clerk for U.S. District Court Judge Sirica during the Watergate trials, and legendary Pulitzer Prize-winning reporter Bob Woodward, who worked with Carl Bernstein to break the Watergate story, are coming together for an unprecedented event. The two will highlight the lessons they learned about trust and integrity in public life during their unique experiences with Watergate and beyond. Hosted by the Deseret News, the event will be held in Washington, D.C. and streamed live online on Monday, January 14, 2019, from 6:30 to 8 p.m. EST (4:30 to 6 p.m. MST).

From presenting at Oxford to posting on social media, Elder Christofferson has often shared how his experience with Watergate taught him life-long lessons.

During his final year at law school at Duke University, David Todd Christofferson applied for a prestigious clerkship with Judge John J. Sirica. Despite there being over 200 other applicants, Christofferson got the job. Little did he know that his new position would plunge him into the depths of one of the biggest political scandals in American history.

Just two weeks after Christofferson started his post as Sirica's law clerk, the men involved in both break-ins at the Watergate Hotel—the site of Democratic National Party Headquarters—were indicted in Sirica’s court on charges of burglary. Christofferson was with Sirica that March when the first man involved in the scandal finally broke the silence and later when Sirica reviewed the infamous Nixon tapes.

In 2015, Elder Christofferson published "Some Lessons from Watergate" that describe the important and spiritual lessons he learned during this tumultuous time:

After speaking at Oxford on the topic in 2016, Elder Christofferson later wrote on Facebook:

"The life lesson I took away from this experience [Watergate] was that my hope for avoiding the possibility of a similar catastrophe in my own life lay in never making an exception—always and invariably submitting to the dictates of an ethical conscience. Putting one’s integrity on hold, even for seemingly small acts in seemingly small matters, places one in danger of losing the benefit and protection of conscience altogether. A weak conscience, and certainly a numbed conscience, opens the door for “Watergates,” be they large or small, collective or personal—disasters that can hurt and destroy both the guilty and the innocent."

To make sure you don't miss this historic event, sign up to receive an email notification here.