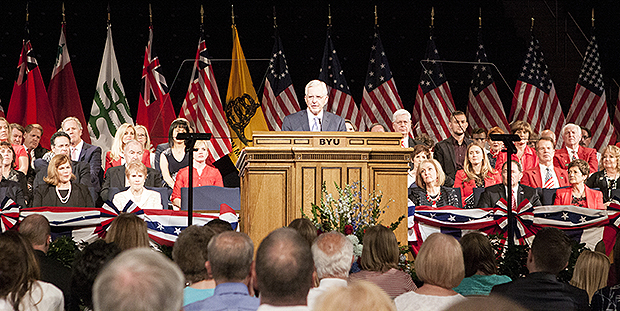 "We live in challenging times. Religious freedom is indeed under fire,” Elder D. Todd Christofferson of the Quorum of the Twelve Apostles said on June 26 in Brigham Young University’s Marriott Center. Elder Christofferson was the keynote speaker at the Freedom Festival Patriotic Service, during which he spoke about America’s heritage of religious liberty and encouraged the audience to “defend that heritage before it is too late.”

“I am convinced,” he said, “that those who question the value or even the legitimacy of religious freedom do not understand that it is woven into the very soul of America.”

He recounted how religion was a leading reason for colonists to leave England for the New World. He also said that the American Revolution “cannot be understood without taking into account the religious teachings that motivated patriots to action.”

Elder Christofferson spoke of the Declaration of Independence and described how it “reminds us that Americans believed they were ‘endowed by their Creator with certain unalienable rights.’ Later, the Constitution would enshrine the first of those unalienable rights—the right to religious freedom.”