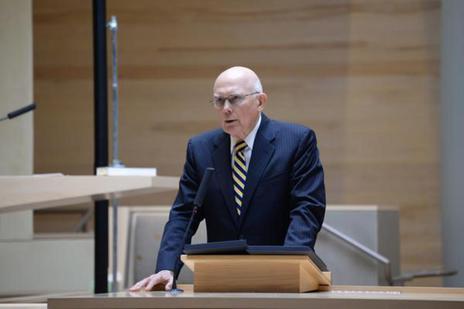 Elder Dallin H. Oaks is making national news for his comment this week about Kim Davis, the county clerk in Kentucky who refused to grant marriage licenses to same-sex couples.

The LDS Church leader's brief statement that Davis was wrong drew direct criticism from her attorney, but one expert said his speech was a "significant development" in the church's ongoing effort to steer a carefully considered course unique among faiths working together for the common causes of traditional marriage, family and religious liberty.

"I think this is a big deal," said Jonathan Rauch, a senior fellow at the Brookings Institution in Washington, D.C. "I think Elder Oaks' statement is a significant development in the unfolding drama over religious liberty and gay rights."

On one extreme, demanding religious liberty rights, is Davis and her attorney, Mathew Staver, who began to advocate for disobedience of the U.S. Supreme Court's legalization of same-sex marriage three months before the ruling.