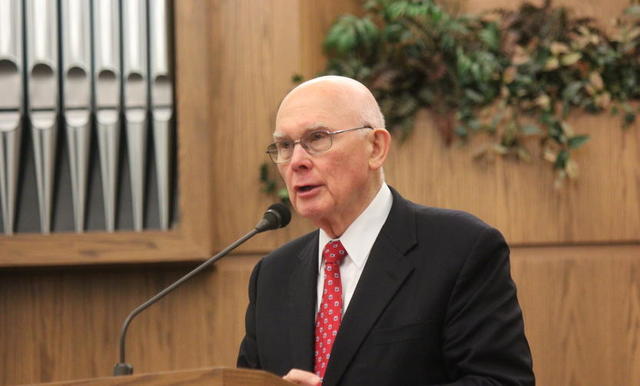 Urging all Church members to take a stand in defense of religious freedom, Elder Dallin H. Oaks of the Quorum of the Twelve Apostles and other Church officials addressed more than 1,100 people at the Tempe Institute of Religion at Arizona State University on Jan. 21. Over 11,000 more, age 16 and older, viewed a live broadcast of the event at 81 stake centers in Arizona.

“The leadership and membership of The Church of Jesus Christ are irrevocably committed to the principle and preservation of religious freedom because it is necessary for the divine plan for mortals to exercise their agency to make the choices necessary to progress toward eternal life,” said Elder Oaks. “In furtherance of what we believe to be the inspiration of God, our national and state constitutions guarantee the free exercise of religion by forbidding government laws or actions to restrict it.”

He explained that core principles of Church doctrine, such as those identified in “The Family: A Proclamation to the World,” are divinely given doctrine of the restored Church and cannot be changed.

“The most important Church doctrine being currently attacked is our practice and reliance on the traditional man-woman marriage and family,” Elder Oaks said. “The Family Proclamation begins with the declaration that ‘marriage between a man and a woman is ordained of God and that the family is central to the Creator’s plan for the eternal destiny of His children.’”