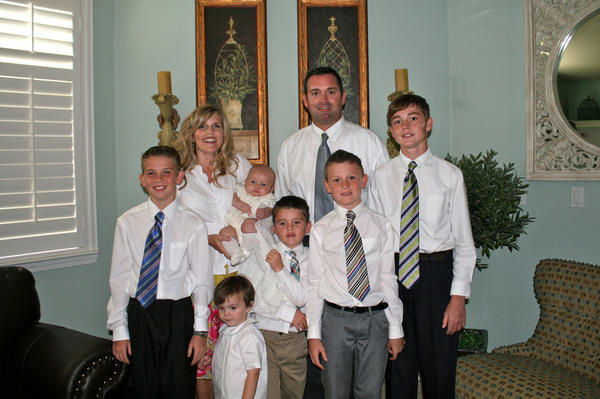 MR says: "This event has really forced us all to rely on our testimony and figure out what faith is and how to use the Atonement properly," says Melisse Myers, sister of Bishop Clay Sannar. "And we have a stronger desire to serve."

On Aug. 29, 2010, Bishop Clay Sannar was shot and killed in an LDS meetinghouse in Visalia, California. Five years later, his wife and six sons are working to make the tragic experience a force for good.

“I feel in everything the Lord has certainly prepared us and not left us without a way to carry on,” said Julie Sannar, Clay Sannar's widow. “We’ve been blessed immensely, and even though it’s difficult, I think about the people in (The Book of) Mosiah, how their burdens were not taken from them — the burden was still there — but they couldn’t feel it on their backs because their strength was increased through the Lord. I know the Lord prepared us every step of the way.”

Julie Sannar and her six boys still attend the Visalia 2nd Ward, where her 40-year-old husband served as a bishop in The Church of Jesus Christ of Latter-day Saints. The congregation provides an extensive support group that includes two of Clay Sannar's siblings: sister Melisse Myers and her husband and five children, and brother Matthew and his wife and two children.

While her sons have at times asked why the tragedy occurred, Julie Sannar said she received a confirmation from the Lord the day of the shooting that the family was where they were supposed to be.

“I knew there was not any reason to ask why," she said. "Someday we’ll have an understanding. We just do our best and accept the Lord’s will, whatever that may be. That’s a lesson I’ve reiterated to the boys, especially the little boys.”