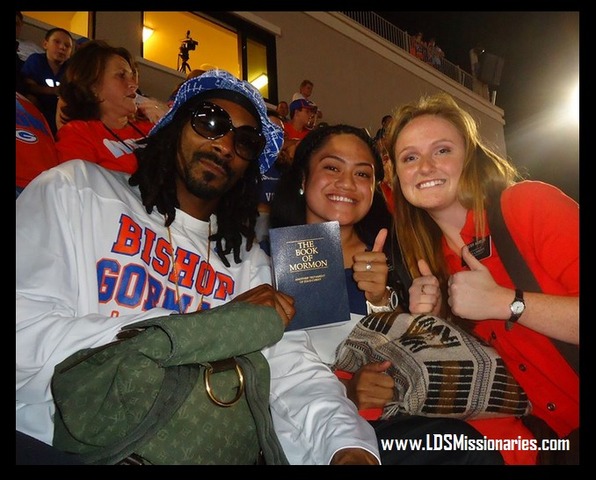 After an April fools hoax claimed Snoop Dogg was converting to The Church of Jesus Christ of Latter-day Saints in 2008, a staged picture of the rapper with a Book of Mormon popped up all over the web.

But now, six years later, a new photo has emerged on social media that put Latter-day Saints and Snoop Dogg back in the limelight.

After receiving permission from her mission president to watch her brother play in a high school football game, Sister ‘Otukolo and her companion, Sister Andelin, learned that Snoop Dogg’s son also played on the team. So, at the game, these two ambitious missionaries went on the lookout for Snoop Dog and managed to snatch a candid photo of the rapper with the Book of Mormon that they posted to the Latter-day Saint Missionaries Facebook page.

As a comment on this post so aptly observed,  “bow wow wow yippi yo yippi yay, The Book of Mormon will go forth in the latter-day!!”