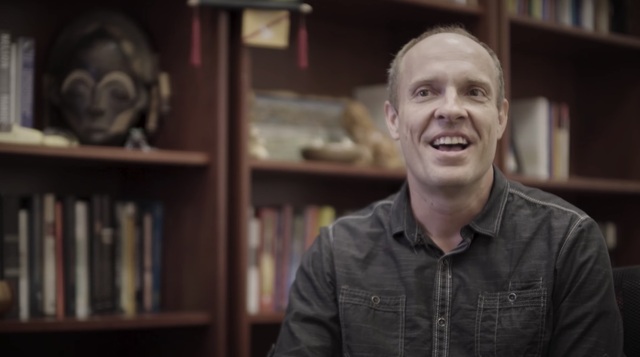 Fans of ESPN likely recognize Chad Ford’s face or at the very least his name. For years, Ford was an NBA Draft expert for the television network, but what many didn’t know was while simultaneously working in many people’s dream career, Ford was pursuing his true passion teaching conflict resolution and peacebuilding at BYU–Hawaii. In his new book, Dangerous Love, Ford teaches principles he has taught about the transformative effects of changing the way we view conflict. He teaches that we can either approach conflict with love or fear and illustrates how the path we choose can make all the difference.

Ford was this week’s guest on the All In podcast and shared an example from his own life that illustrates the importance of choosing love over fear.

Morgan Jones: Chad, you conclude the book with a story about your giving your father a priesthood blessing when he was on his deathbed, can you tell listeners about that and what it taught you about choosing love over fear?

Chad Ford: Yeah, it's a really sacred story for me. I went back and forth actually about, “Was I going to include it in the book?” because of how tender it was for me. I'd been in a conflict with my father for a number of years. It was very harsh. And I was equally to blame for much of it. And it took me a very dramatic episode for me to really come out of it and begin to really see his humanity—and turn first—and to do everything that I talked about in the book. And I'll be honest with our listeners, that was a conflict while I was learning this stuff. And so just having all this information certainly hasn't made my life perfect or mean that I've always made the right choices. And the story with my father is an example of this and partly why I tell it. But I end the book with an experience that happened after we reconciled about a year later. My father had gotten pneumonia, and given a number of other physical disabilities that he'd had and health issues, he had asked for there not be treatment on him, and I'm not sure the doctors could have treated him anyway. And so as I rushed to his bedside, I was worried that I wasn't going to make it. The doctors were pretty convinced that he was going to pass away shortly. His lungs had filled with fluid, but I got there, and he was still alive. And he sort of came out of a deep sleep and we told each other that we'd loved him. And then something amazing happened, he didn't pass away. He stayed hanging on. He was gasping for breath—gurgling for breath—it seemed like the most painful and torturous existence. And the doctors couldn't understand it. And we couldn't really understand it either. And there's a lot of family in the room, and we were there so long, a lot of family cleared out. It was just me and my father again. He came out of his sleep, and I asked him, “Dad, what's going on?” You know, “You've been suffering and in so much pain for a long time, you've almost looked forward for this day for a while, what's going on? Why are you hanging on?” And my father said that he was afraid. And I asked him, “Dad, you've been a man of faith your whole life, what are you afraid of?” He started to list all of his mistakes that he had made in his life and all the times that he felt like he had disappointed family or God, and you could hear this sense of shame in his voice. And by the way, all things that he had repented of. All things that he'd cleared up in his life, but still holding on to those and he said, “I'm afraid when I get to the other side, God's not going to be very happy.” And then he asked me, “Can you give me a blessing?” And when I laid my hands on his head, something happened that had never happened to me in the history of blessings. For those of you that aren't [Latter-day Saints] that might be listening to this, at times we give priesthood blessings of healing and comfort to family members and people that are sick or what have you. And he had asked for one from me, the first blessing I'd ever given my father. He'd given me several in my life, but not the other way around. And when I laid my hands on his head, I'll never forget—I mean words really fail me—to feel the intense amount of love that I just felt radiating through me, through my body out my hands. And I don't remember exactly what I said at first, but I remember muttering, “I didn't know.” I didn't know, I had no idea the level of love that our Father has for us. And I remember my last words to my father were, "It's okay. It's time to come home. He loves you. It's okay." And my father passed away about 15 minutes later, at peace. And in his last breath, a tear rolled down his eyes and his face went into a smile. And it struck me in this sort of powerful way, if we only knew who we really were. If we only really understood that all of us in this life are struggling and stumbling and making mistakes. If all of us sort of knew where we were trying to get in this life and how challenging it was there, we'd be there rallying each other. We'd be supporting each other. We would find ways to show that love in the ways that I felt that love for my father in that moment to help them get through it. And instead of judging and condemning and fighting and all the things that we engage in, we would show an increase of love. We would choose love over fear. And it deeply and profoundly changed me as a person afterward and changed my practice in conflict resolution at that point. I knew something now deep in my bones about our relationship to the divine—to heaven—that I'd heard about and professed and talked about before, but I don't think that I ever had felt or knew at the same level, and capturing that same sort of feeling towards the people that we're struggling with will change you, surely. And it might just change them as well.

Morgan Jones: I love that story so much. That's so, so powerful. My grandfather just passed away a couple of weeks ago. And so that idea of that moment between life and death has been on my mind and on my heart a lot. And so thank you so much for sharing that. My last question for you, Chad, is what does it mean to you to be "all in" the gospel of Jesus Christ?

Chad Ford: I think that story in many ways encapsulates that. That I am loved beyond in sometimes my own comprehension and that, as a disciple, my job is to radiate that love out toward my brothers and sisters. And it's to do it both in the way that I see them and interact with them, but also in word, in deed, and intentionality. We're here to help. We're here to lift up. We're here to feed the hungry, to clothe the naked, and to help the people that are mourning, and to sustain the people that are struggling in this life, whether it's because of their bad decisions, or because of circumstances or for whatever reason. It doesn't matter. My discipleship is about helping and building that peace between us that we once felt many, many, many years ago and I believe that we can feel again. And for those that say, “Well, that's fine. That'll happen in the afterlife.” I don't think we learn how to do it in the afterlife if you don't learn how to do it here. And so for me, it's just a journey in my own life, of also figuring out how to do it here. Because I do believe that at the end of the day, love wins.

Conflict Podcast All InConflict,Podcast,All In,
Comments and feedback can be sent to feedback@ldsliving.com