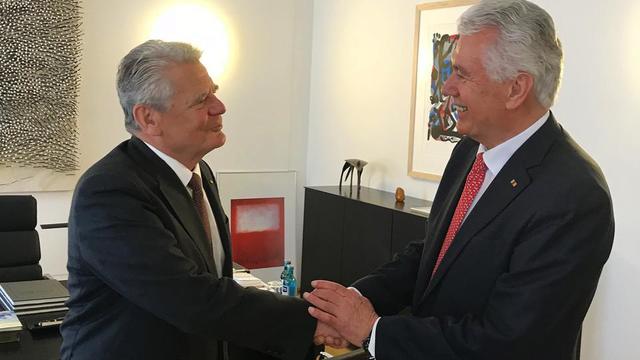 Former president of Germany Joachim Gauck praised the Church for its missionary work and the commitment of its members as he received his personal family history from Elder Uchtdorf.

On Tuesday, May 15, 2018, the former president of Germany, Joachim Gauck, met with representatives of The Church of Jesus Christ of Latter-day Saints in Berlin and received a detailed collection of his personal family history spanning five generations of ancestors. The three-volume work and a framed chart were presented to him by Elder Dieter F. Uchtdorf of the Quorum of the Twelve Apostles.

The meeting took place in President Gauckʼs office in the German Bundestag building. He was visibly touched and impressed by the scope and content of the information.

During a warm conversation, President Gauck expressed his respect regarding the voluntary commitment of the members of The Church of Jesus Christ of Latter-day Saints. Special recognition was given to the worldwide service of young missionaries and the many challenges associated with it. These young people serve without pay, dedicating up to two years of their personal time.

In 2002, Elder Uchtdorf met with then President Johannes Rau at the Bellevue Palace in Berlin, where he presented to him a collection of his family history. As early as in 1970, President Gustav Heinemann met with then Elder Thomas S. Monson, who later became the president of the Church of Jesus Christ.

In addition to the active missionary service, the ministering efforts of the Church are focused on strengthening families, providing humanitarian and charitable service to others — regardless of their religion, origin, or socioeconomic circumstances — and anchoring individuals spiritually and emotionally in today's world through the teachings of Jesus Christ.

In Germany there are more than 150 congregations, where believers gather for Sunday services, and two temples used for worship on weekdays. These temples are located in Friedrichsdorf, near Frankfurt, and in Freiberg in Saxony.