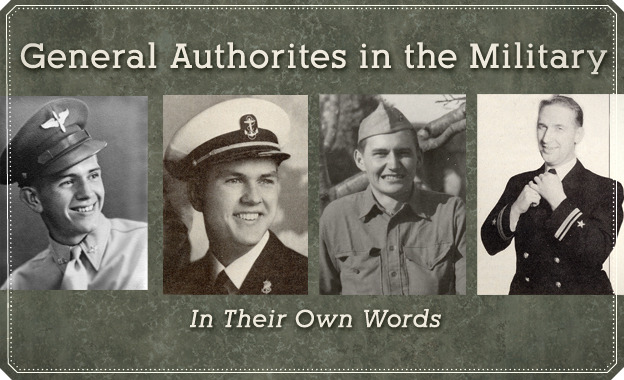 Boyd K. Packer, Courtesy of the Saints at War Project.

I was a priest in the Aaronic Priesthood when World War II exploded upon the world. I was ordained an elder when we were all marched away to war.

I had dreams of following an older brother, Leon, who at that time was flying B-24 bombers in the Battle of Britain. I volunteered for air force pilot training.

I failed the written test by one point. Then the sergeant remembered that there were several two-point questions, and if I got half right on two of them, I could pass.

Part of the test was multiple choice. One question was “What is ethylene glycol used for?” If I had not worked in my dad’s service station, I would not have known that it is used for automobile antifreeze. And so I passed, barely.

Things Known Brought Back to Remembrance

I had an experience from which I learned a very important lesson that I should have learned earlier. I relived this experience last week when we were in Japan and concluded that I would talk about it in conference.

During World War II, I was a pilot in the Air Force. After service in the Pacific Islands, I spent a year in Japan with the occupational forces. It was, of course, advisable to learn a few words of Japanese. We needed at least to be able to ask directions, ask for something to eat.

I learned the common greetings and a few of the numbers and the salutations, and like many other members of the Church, I spent all my off-duty hours in missionary work among the Japanese people; and I learned from them those few words of what I thought was a very difficult language.

In July of 1946 the first baptisms took place in Osaka. Brother and Sister Tatsui Sato were baptized. And while they had been taught for the most part by others, I was privileged to baptize Sister Sato.

Though we were not unhappy in Japan, there was really only one thing on our minds, and that was home! I had been away for nearly four years. The war was over, and I wanted to go home.

When that day finally arrived, I supposed never to return to Japan, and I just closed that chapter.

The next years saw me busy getting an education, raising a family. I was not around Japanese people and had no occasion to use those few words that I had learned. They were left in the dim and very distant past, erased by 26 years of forgetting—gone, as I thought, forever. Then came an assignment to Japan.

The morning after my arrival in Tokyo, I was leaving the mission home with President Abo when a Japanese elder spoke to him in Japanese. President Abo said that the matter was urgent and apologized for the delay.

He went through some papers with the elder, discussing them in Japanese. Then he held up one of the letters and, pointing to a sentence, he said, “Korewa …”

I had not used those words in 26 years. I had thought that I should never use them again. But they were not lost.

I have thought that a most important experience and realized finally that nothing good is ever lost. Once I got back among the people who spoke the language, all that I possessed came back and it came back very quickly. And I found it easier then to add a few more words to my vocabulary.

If you will return to the environment where spiritual truths are spoken, there will flood back into your minds the things that you thought were lost. Things smothered under many years of disuse and inactivity will emerge. Your ability to understand them will be quickened.