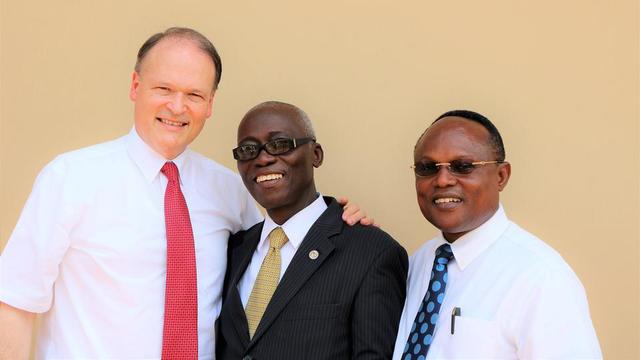 How Are Stake Presidents Chosen? Gerald Lund Provides Touching Insights Into the Process of Revelation

One of the most challenging (and intimidating) things that General Authorities and Area Seventies are asked to do is to choose a new stake presidency during the creation of a stake or the reorganization of an existing stake presidency. It involves visiting a stake where typically the authority doesn't know any of the leadership personally. Even more challenging, the General Authority is often assigned to go to a country where he does not speak the language and has to do everything through translators. Yet in a period that lasts no more than about twelve hours, a decision must be made that is in harmony with the Lord's will.

Fortunately, through many years of experience a process has been tried and proven viable that makes this quiet miracle work week after week all over the world. Since this process is a wonderful illustration of how the voice of the Lord works in a very practical and real-life situation, a brief description of the process may be of value, along with some actual examples of how it works.

First of all, there are always two authorities assigned to such conferences so that they can confer together and confirm what the Lord is prompting them to do. This also fulfills the law of witnesses (see D&C 6:28). In most cases they arrive in the stake on Friday evening or early Saturday morning to begin a series of interviews. The priesthood leadership of the stake (normally the stake presidency, patriarch, bishops and branch presidents, and high councilors) are asked to come in for brief, private meetings with the two presiding authorities. In the individual interviews, each priesthood leader briefly shares a little information about himself and then is asked for names of brethren he would recommend for consideration as the new stake president. He is also asked to briefly explain why he feels as he does.

This process is based on an example found in the Old Testament. When Samuel was told by the Lord to choose a replacement for King Saul (1 Samuel 16:1), the phrases used to describe what happened in that process are instructive: "Jesse called Abinadab, and made him pass before Samuel" (v. 8). "Jesse made Shammah to pass by" (v. 9). "Jesse made seven of his sons to pass before Samuel" (v. 10). Not until Samuel saw David did he finally feel who was to be the next king. When that finally happened, the account says simply: "And the Lord said, Arise, anoint him: for this is he" (v. 12).

The series of interviews with the priesthood leadership of the stake allows the potential candidates to "pass before" the presiding authorities. As they do so, thoughts and feelings begin to come to them. Sometimes they come quickly. Other times they come only after the interviews are completed. Rarely are these thoughts and feelings dramatic or remarkable. They are almost always very gentle and very subtle, almost like a whisper. Sometimes they come when the person first enters the room. A very quiet feeling comes that he could be the one. Other times it is something the person says that triggers a feeling of rightness. Often thoughts come into the minds of the interviewers, and they are prompted to ask a question that helps reveal the heart of the person being interviewed.

Occasionally, feelings may come from simply hearing the name of a person the authorities have not yet met. It is no more than a fleeting feeling that this name could be significant. Later, when that person comes in, they have a feeling of peace about him.

It is not always a positive confirmation. Sometimes a man comes highly recommended by others, but during the interview there is no confirming witness, and the authority knows that this is not the man the Lord has chosen at this time.

When the interviews have been completed, the two authorities close the door and spend time together reviewing their experience. They go over the list of names again. They share thoughts and feelings they may have had during the process. They discuss impressions that have come. This fits another scriptural model on how to receive revelation. Oliver Cowdery was told that it was not enough to simply ask the Lord for an answer. He was to study it out in his mind, and then ask the Lord if his decision was right. Then would come a confirmation, either as a stupor of thought or a burning in the bosom (see D&C 9:8–9).*

In some cases, this discussion may last only a few minutes because both authorities have a clear conviction about who the person is to be. In other instances, there may be no such feelings with either of them, and a more prolonged discussion is required to let the feelings and impressions come. Though it doesn't happen often, there are times when they receive no confirmation about any of the men they have met. In such cases other names are sought and further interviews are conducted. But whatever particular route the process may take, the two brethren who have the assignment constantly search their mind and heart. They look inward, reviewing feelings they have had or thoughts that have come to them.

During this private consultation process (or studying it out in their minds), eventually the two brethren come to a consensus. They reach a joint decision. At that point, they kneel together in prayer and put their decision before the Lord. Typically, each prays individually, placing the chosen name before the Lord and asking the Lord "if it be right" (D&C 9:8). When the prayers are finished, they briefly sit, quietly looking inward, searching their heart and listening for that still small voice of confirmation. When it is clear they are in complete harmony on the matter, they invite the chosen person back and extend the call.

Again, I wish to emphasize how "normal" this process seems on the surface, even though it is quite remarkable. Time after time the process works, but it has never been—at least for me—something that people would think of as dramatic or miraculous. To an observer, the process would seem perfectly normal. But it works. Over and over, week in and week out in countries all across the globe. It works!

It has been a little surprising to me how often, once the decision is made and the call extended, the Lord sends what I call a "confirmation" or a "second witness." It is a second witness because the first comes during the selection process. Again, these are not great or dramatic experiences, but just quiet ways the Lord lets us know, once more, that His will was achieved. It may come when the wife says something that indicates that she had received some feelings about what was coming. Or the candidate may make a comment that causes the two visiting authorities to look at each other and smile, because it fits perfectly with something they had talked about earlier. It may come in the setting-apart blessing or in a host of other ways.

There was one challenging case where an Area Seventy and I were assigned to reorganize the stake presidency in a stake that had some peculiar and rather pressing needs, and we felt particularly concerned that it be done right. This was in a country where I didn't speak the language, and so I had to have the Area Seventy translate for me throughout the proceedings. That complicated it for me, adding to my concern that it be done right. During the interviews, we both felt good about one of the bishops, and upon receiving the quiet assurance that this was right, we called him to be the stake president. But even as he accepted and his wife expressed her support for him, I can remember thinking to myself, "O Lord, this feels right, but this is so important. I hope we read Thy inspiration correctly."

Then at the end of our interview, as he stood up to leave, he said to us, "Well, now I understand the dream I had the other night." At the questioning look on our faces, he explained. He said that in his dream he saw himself in the stake president's office sitting across the desk from the current president. This was not unusual for him because he was a bishop and was often with the stake president. "But," he went on, "as we finished our meeting and I stood up to go, the president also stood up, removed his suit coat, and came around the desk and placed it around my shoulders."

As he said that, I immediately thought of the prophet Elijah placing his mantle on Elisha to signal that Elisha was chosen by the Lord to carry on the work after Elijah was taken. I instantly offered a silent prayer of thanks for that "second witness." The man we had called was indeed the man the Lord had chosen before we even arrived. In one way it was a remarkable experience because of what it signified, but in another way the experience itself was quite ordinary. The bishop received a quiet impression to share his dream with us. He spoke in a calm tone, much as if he were telling us something about his family. For something so remarkable, it was remarkably unremarkable.

On that day I gained a deeper appreciation for why the Lord says the still small voice can pierce the heart and cause it to burn. My heart was deeply touched that day, and I was filled with gratitude for that additional witness from the Lord. That witness indicated not only that we had understood His will regarding the new stake president, but it also told us that He was there, that He was watching over this stake, that He is indeed at the head of the Church and actively leading and directing the work of His Heavenly Father.

That is just one example of how this whole wonderful process of revelation works. 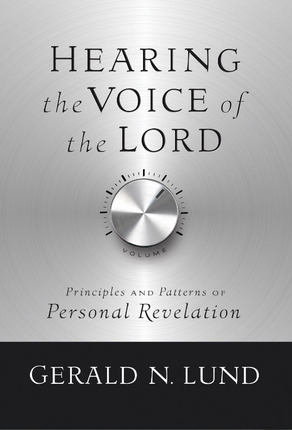 How can we navigate safely through our turbulent times? Personal revelation is one key! Elder Gerald N. Lund, the million-selling author of The Work and the Glory, offers profound insights about how personal revelation “works.” Learn how we can increase our ability to receive and recognize personal revelation, what we can do to avoid being misled, and many other ideas relevant to this tremendously important spiritual gift.