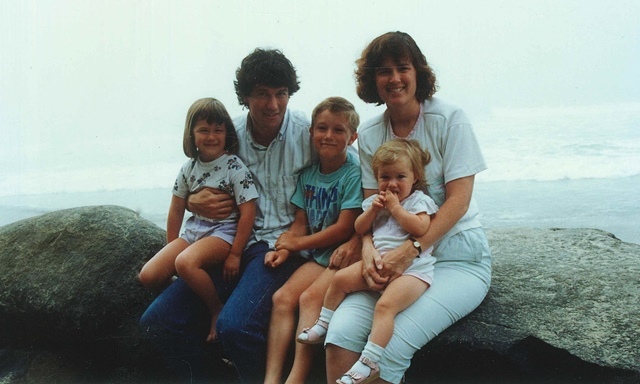 Working at Disney sounded great. Until LDS producer Mitch Davis found himself working 70-80 hour weeks and never seeing his family. He knew things had to change. And it took a literal bolt of inspiration to get him back on track.

Surprisingly enough, the Davis family started down the film career path early in life, because of an experience Davis had while on his mission in Cordoba, Argentina. “I was walking along a road with my companion in Cordoba one day when I had a very distinct prompting that someday I was supposed to make a movie about what it meant to be a missionary,” Davis remembers.

But the prompting was a bizarre one to him, especially since he had aspirations to be a local sports writer for his town paper. After returning home from his mission, however, he got a little sidetracked. “My wife and I got married, had a couple kids. I had a regular job, and I remembered this assignment that I had to make a movie. So I told my wife, ‘Hey, I’ve got to do this,’” Davis says. “She said, ‘Well you better do it now because our family’s not getting smaller.’” The couple sold their house and cars and moved to Los Angeles to go to film school, where Davis eventually got an internship at Disney that turned into a more-than-full-time job.

After his life became consumed with work and Davis realized a change was needed, the Davis family picked up and moved to Colorado for a fresh new start.

The only problem was that they moved during the summer—the hardest time for kids to make new friends. Davis shares, “So we decided we wanted to jumpstart that process for our oldest, Christian, by putting together a camping trip with some of the neighbor kids. I invited their dads to come with them. None of them wanted to come, but they all said, ‘you can take my son.’ So I ended up with three 9- to 10-year-old boys, our dog, Pluto, and myself headed up to go backpacking in July.”

After a two-hour drive away from home, 14 miles on all-wheel-drive trails, and two miles of hiking, the small group ran into what looked to be a potential freak blizzard. Wanting to keep everyone safe, Davis decided that they would set up camp for the night and find the lake the next morning. But they never did make it to the lake.

“We got inside, I got the boys in their sleeping bags, and I started to fix them some hot chocolate,” Davis remembers. “And that’s the last thing that I remember for some time because that’s when I got struck by lightning.” The boys told him that the bolt came through the top of the tent and hit their guardian right in the chest, over his heart. A smoldering hole in the top of the tent and singed hole in his garment top confirm the report. “When it hit me, most of the lightning went through me into the dog, Pluto, who was seated right beside me. Then I flew back, and when I flew back, the lightning that was still inside me flew out my arm and hit the kid next to me and then it went from kid to kid to kid and burned them,” Davis recalls. Fortunately, the boys were okay, but they were worried about Davis, who they believed had died.

Davis continues, “The first memory I have is of my ears starting to work again. My right eardrum had been blown out during the lightning strike, so I couldn’t hear very well. The boys sounded like they were 50 yards away, but I could hear them screaming and crying and praying. I heard my son say, ‘Dad, please don’t die.’ I heard one of the boys promise God he would never do another bad thing in his entire life if Brother Davis would just wake up.” But Davis couldn’t move, see, or speak to comfort the hysterical boys, who he knew were totally isolated.

It was at this moment that Davis became aware of a terrifying realization—he was dying. “I felt like I was lying on my back on a conveyor belt and that somebody turned it on,” he describes. Knowing that he really didn’t want to die, especially with those young boys crying and praying, he decided to say a prayer, feeling intuitively that prayer would help the situation.

“But I couldn’t pray, and that’s really hard to explain,” Davis says, “But even in my mind, when I tried to formulate a prayer without my lips and my mouth, there was a dark oppressive force that made it impossible for me to even formulate a prayer. I don’t know how to explain other than, when I read Joseph Smith’s account of his tongue being bound, I completely get it. I just couldn’t do a thing. And I was going further and further away and I was getting smothered, is what it felt like. At the last possible instant, I heard a voice or received a prompting, however you want to phrase it, and the message was very simple. The first piece of it was an expression of God’s love for me, His approval of me. Then the second half was ‘Ask in confidence.’ Just encouragement that I could pray and he would answer in the affirmative. And that was what I needed. As soon as I heard that, my tongue was loosed, or at least in my mind I was able to formulate the prayer: ‘Father.’ That’s all I said, and immediately everything went in reverse. My eyes rolled forward; I popped my head up; I looked around.”

That’s when the boys told him what had happened. Still paralyzed in his limbs and uncertain if death was still waiting around the corner, Davis told the boys what to do if he didn’t make it before convincing them all to go to sleep and that they would figure things out in the morning. That left the immobile Davis awake to contemplate this freak accident and tangible spiritual experience in the dark silence.

“I found it really hard to take it all in, and I started to do a little bit of personal inventory,” Davis remembers. After thinking about his testimony, his family relationships, and his life’s purpose, he remembered that distinct prompting he’d had 12 years earlier as a missionary in Cordoba. “So I’m lying up there on the mountain doing this personal inventory, and one of the things I remember is, ‘Oh yeah, you were going to make a movie about missionaries. What happened to that?’ Because when you go to USC film school and you work at Disney and then Columbia, you’re not thinking about making missionary movies. You’re thinking about making whatever movies the studios are pushing at the time.” But that was about to change.

Another Bolt of Inspiration

The next morning, Davis was recovered enough to bring the boys home. Not long after, he was called to be the bishop in his ward, which again seemed to be putting the missionary movie on hold. What he didn’t know is that his calling would actually lead to the inspiration he needed.

“The guy I felt inspired to call as my first counselor was the father of the boy who promised God he would never do another bad thing his entire life if I would just wake up. He was our neighbor. Cary LaCouture,” Davis says. While serving in the bishopric together, Davis mentioned to LaCouture his prompting to make a movie about a Mormon missionary. LaCouture immediately suggested Elder John H. Groberg’s book, In the Eye of the Storm. But Davis was skeptical at first. How could one make a movie from a general authority’s book?

“I couldn’t imagine that a general authority’s book would not just be sermons and ‘the moral of the story is . . .’” After a lot of encouragement and persistence, LaCouture finally loaned the book to Davis, who only had to read 15 pages before he knew it was the movie he had to make.

Once he was released as bishop, Davis got to work—something he says he couldn’t have done without the support of his wife. Two years, a second mortgage, and a lot of meetings and paperwork later, the Davis family picked up and moved to the Cook Islands during the filming of what would come to be known as The Other Side of Heaven. Davis says his family’s life has been blessed because of it. “[Living and filming on the islands] had the biggest impact on my oldest son and daughter,” he shares. They grew closer as a family and learned from the generous, loving ways of the Polynesian people they spent time with. It was exactly what his family needed, and what Davis needed to reprioritize and refocus his faith.

“Not everyone has such dramatic experiences,” Davis acknowledges. But he adds, “Some of us are dense enough that we need to be struck by lightning to pay attention. It was like God took me by the lapels and shook me to say ‘listen to me for just one minute.’”

Today, Davis has seen over three million copies of Elder Groberg’s story sold on DVD, and it is still selling. The story of a young missionary from Idaho has been played on television in many major Muslim countries in the world and been seen by an estimated 200 million people worldwide. Davis’s own family and faith has been strengthened to the point where they’ve made another movie, this one portraying their own family’s experiences, to help others find the same inspiration and faith.

Davis explains, “In a very real way, the movie The Stray tells the story of a workaholic dad, a family in dysfunction, a wonder-dog who shows up and helps the family, and a lightning strike that shook me to the core. [That strike] helped me change to become a bishop with a counselor who gave me The Other Side of Heaven movie. Otherwise, I don’t know if I would have ever come across [The Eye of the Storm] or ever read it.”

And all that good, Davis would agree, came from the power of following a prompting.

Watch a clip from The Stray portraying Davis's busy life while working at Disney and the day a dog began to help the family come back together: