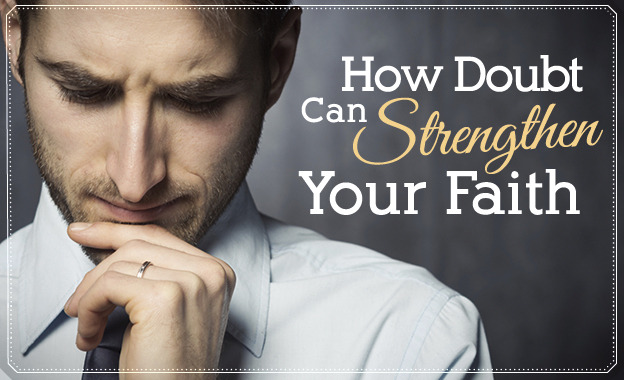 How Doubt Can Actually Strengthen Your Faith

You might be catching up with friends via social media, looking for church history related content online, or sitting in the middle of a Sunday school class when you read or hear something that prompts prodding and uncomfortable questions.

"How do I know if this is right or if it isn't? What if the things I believe aren't true?"

It can be difficult to spiritually navigate in the world today without running into tough questions like these that challenge our faith and cause us to doubt. Often, that doubt is trying and hard to address, something we’d rather hide than admit to having.

According to scholars Terryl and Fiona Givens, however, doubt is an important piece of our mortal probation on earth. Rather than something to be ungrateful for and frightened of, they say, doubt can be a valuable and ennobling gift from the Lord.

One of the most powerful examples of the ennobling doubt the Givenses refer to is found in the boy prophet, Joseph Smith. After months of searching for the truth in a religious environment that he called contentious and confusing, Joseph’s doubt pushed him to ask difficult questions.

“In the midst of this war of words and tumult of opinions, I often said to myself: What is to be done? Who of all these parties are right; or, are they all wrong together? If any one of them be right, which is it, and how shall I know it” (JSH 1:10)?

It was due to this trial of faith, or “crucible of doubt” as the Givenses would call it, that Joseph was pushed into the scriptures and wrote:

“While I was laboring under the extreme difficulties caused by the contests of these parties of religionists, I was one day reading the Epistle of James, first chapter and fifth verse, which reads: If any of you lack wisdom, let him ask of God, that giveth to all men liberally, and upbraideth not; and it shall be given him.

“When we look at James 1:5, it’s actually God telling Joseph to ask a question,” Fiona Givens notes, pointing out that the scripture begins with a hypothetical similar to "if ye lack faith." But it’s more important than that, she adds. “It’s like God is validating asking questions. In actual fact, he’s saying, ‘You have to ask the question, otherwise, we can’t have a conversation and I can’t bring you further enlightenment’.”

Open Doubt, Not Skepticism, Leaves Our Hearts Sensitive to the Answers

Doubt, if handled properly, can push us to our knees and cause us to ask with the sincere desire to know. If motivated by that desire rather than false assumptions, we can discover the truth for ourselves, receiving an earned faith instead of what Terryl Givens calls an “inherited faith” gained from the testimonies of others. What he and his wife want to make clear is that open doubt, an “I’m not sure that this is true but I’m open to the answer” kind of doubt, is what drives us to the truth, not cynicism, which closes our hearts and minds to revelation.

Often, open doubt, rather than being considered a constructive thing, is lumped with cynicism and the doubter is criticized for having sincere questions. This may happen at a ward or community level where members are unprepared to handle and maybe even wary of the questions their brothers and sisters have.

Terryl Givens credits cultural pressures within the Latter-Day Saint community for this lack of preparedness. “We have become accustomed to equating testimony with certainty and knowledge, and we use the language of certainty--I know the church is true, I know this, I know that--and it may be that in fact the silent majority as members of the congregation may very well feel unqualified or unable to affirm that they know the church to be true,” he said. “We are simply trying to add our voices to those of the brethren like Elder Holland, to the effect that we need to be more accommodating and embracing of those in our midst who feel that they want to express the desire to believe without being able to express the certainty.”

Doubt Often Urges Us to Rely Upon the Lord

The Lord Himself, the Givenses note, is merciful to those who can do no more than desire to believe as they seek direction during doubt. This is best evidenced in the scriptural account of the Savior healing the young boy in Mark 9.

The boy's father, rushing the child to the Savior and begging for any kind of help the Savior can give, despite not seeming convinced that he can give it, receives the following response:

"If thou canst believe, all things are possible to him that believeth" (Mark 9:23).

The father asserts that he does believe, but the story doesn't end there.

“After looking in his eyes, Christ knows that he’s telling a whopper," Fiona Givens says. "So immediately the man says, ‘Help thou mine unbelief.’ That is the sort of doubt we are talking about, where you are open to the fact that God will answer your questions, that he is invested in your life and your testimony and your faith journey, that he has invested everything in helping you return home, and so that type of doubt is much more productive than the doubt we see in the world that is only combined with cynicism and skepticism.”

Doubt Helps Us Feel the Rewards of Actively Using Our Agency

When doubt drives us to humility, it can change who we are and solidify what we believe, making us strong in testimony and faith. It gives us ownership in our Heavenly Father's plan and satisfaction in our agency.

"I think the greatest benefit that can be derived from an honest doubt is the recognition that in the final analysis, we choose to believe," Terryl Givens asserts. "For somebody who has seen that there are reasons to doubt and reasons to believe, and yet make a free choice to affirm their belief, you can see that that is a wonderful position to be in, to recognize that this is something I chose, it’s not something I was compelled by the evidence to accept. It’s something that out of a free heart I choose to embrace. Now, I think that that’s an advantage known only to those who have passed through the crucible of doubt."

The Givenses continue the discussion on doubt and how it can change and empower us in their newly published book, The Crucible of Doubt, a project that Terryl Givens says began as a letter to a close family member struggling with challenges to their faith. After feeling prompted to share the contents of that letter at a youth fireside, Terryl Givens explains, and then having an overwhelming amount of requests for copies, Fiona and he were convinced that there was a need to talk about the subject of doubt in greater depth.

Deep and insightful discussion about doubt continues in Terryl and Fiona Givens' latest book, The Crucible of Doubt.

Faith is the first principle of the gospel of Jesus Christ. So what happens when a person has doubts?

Questioning is not the problem, according to authors Terryl and Fiona Givens. “After all,” they write, “the Restoration unfolded because a young man asked questions.” The difficulty arises when questions are based on flawed assumptions or incorrect perceptions, which can “point us in the wrong direction, misdirect our attention, or constrain the answers we are capable of hearing.”

This insightful book offers a careful, intelligent look at doubt—at some of its common sources, the challenges it presents, and the opportunities it may open up in a person’s quest for faith. Whether you struggle with your own doubts or mostly want to understand loved ones who question, you will appreciate this candid discussion. You’ll come away feeling more certain than ever of the Lord’s love for all of His children.