Aside from fascinating Mormon-influenced comic characters, there are also many interesting LDS artists who shape the comic book industry behind the scenes.

Among one of the first and most influential Mormon comic book creators was Ric Estrada—a Cuban-born artist who had dreams of being a truck driver or reincarnation of Jesus when he grew up, according to an interview with Eric Jepson in Sunstone magazine. Estrada’s career took a different turn when his uncle and Ernest Hemingway helped the young artist leave Cuba for New York where he launched into the comic industry, drawing iconic characters like Superman, Batman, Wonder Woman, and Flash Gordon.

But Estrada’s conversion to the Church would happen half a world away, while working in Germany. “I had one of the darkest days of my life when I was working for the newspaper,” Estrada said in an interview with his son. After his boss fired Estrada then expected him to cater food for his own good-bye party, Estrada said, “I was so bitter that I went up to the editor and slapped his face. I felt so bad about it that I went back to my room and, in tears, got on my knees and said, ‘Lord, I’ve become so lost. I’m a monster. . . . I am lost, Lord. Find me.’ And you won’t believe this, but the next day, two Mormon missionaries knocked on my door. He found me.”

Over the next three years, Estrada read any literature he could find on Mormonism, eventually becoming a member of the Church. Estrada quickly allowed his new faith to infuse everything in his life, including his work. In 1972, when an editor asked Estrada to create a story for the popular DC Comics war anthology, Our Fighting Forces, Estrada decided to share the little-known tale of the Mormon Battalion. “[This was] the first time a major comic book publisher shared anything on Mormonism, which is significant,” Alvord points out. Later, Estrada wrote another story in Our Fighting Forces entitled “Peace with Honor,” which shares the story of Coriantumr and the fall of the Jaredite nation—the only time a major comic book publisher has published a Book of Mormon story.

After these stories were published, missionaries often began handing out the comics as a way to break the ice with new contacts. And Church leaders took note, Alvord says. “The Church began to really consider the possibility of using comic art and illustration because of [Estrada’s] work and the success of it.”

“He brought Mormon stories before an audience that wasn’t looking and might have said no if you asked,” Jepson says. “I suspect people only really listen to alien beliefs when those who believe in them stop being aliens. And that means hearing their stories.”

Though Ric Estrada passed away in May 2009, he was not the only Mormon comic book artist to find ways to channel his faith into his profession.

“My faith touches everything I write,” says Lee Allred, a writer known for his work on Batman ’66, the Legion of Superheroes, a new DC series BUG! The Adventures of Forager that he is creating with his brother, Michael Allred, and the Fantastic Four spin off, (FF). “As strange as it may sound, writing brings me closer to the gospel. Perhaps it is the act of creation that helps me better understand my Creator. I don’t quite understand it myself; all I know is writing makes me a better Latter-day Saint.”

And his brother agrees. “I always find a way to pepper my stories with gospel principles, hope, and optimism,” Michael Allred says. “Most importantly, I’m ever mindful of trying to be a better person today than I was yesterday, to progress, and always respect others and where they are on the path through existence.”

In fact, in the early 2000s, Mike (the creator of Madman with a long list of comic credits and an Eisner Award—the industry’s Oscar) took on the challenge of adapting the Book of Mormon into a comic series titled The Golden Plates. “I got all the way up to starting Mosiah when my wife (and colorist), Laura, told me we were running out of money, and I had to spring back to conventional comics to keep the home fires burning,” he says. 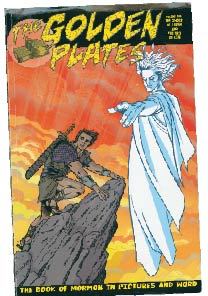 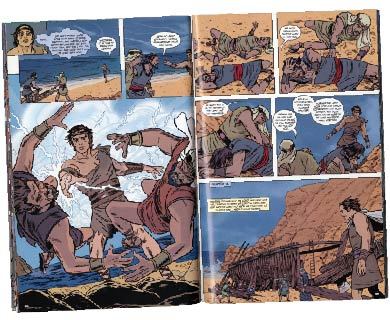 While Mike’s leap of faith to create The Golden Plates inspired many, other LDS creators in the comic industry have found opportunities to share their faith in more subtle ways.

“Who I am and what I believe are evident in my stories because that is what I know. My faith defines my world view and my human experience. Thus elements of what I believe will seep through in my stories,” says Aaron Johnston, a New York Times best-selling author, co-writer of the new BYUtv series Extinct, and writer of several comics that tie in to the Ender’s Game saga.

He continues, “What brings us joy, what breaks our hearts, what defines us as children of God. Those are the stories I want to tell, because that is what the light of Christ motivates me to tell. While you may not see my characters reciting scripture from the Book of Mormon in my stories, you will see people reaching for light.”

Jake Black—who has written comics spanning Superman, Ninja Turtles, and Ender and who wrote the 50th issue of Supergirl with Helen Slater—says, “There have been ways I have shared my faith [in comics]. But it’s more subtle I think, like I’ve paraphrased scripture in dialogue I’ve given to characters.”

But more than writing, Black has seen how his faith can influence people in his day-to-day interactions. “I’ve had a lot of gospel conversations. I’ve shared a lot of copies of the Book of Mormon,” he says. In fact, when a Jewish friend who was working with him on the set of the popular TV show Smallville had questions that disconcerted him about the LDS faith, Black didn’t back away, willingly sharing what he knew. “One day we were talking about Moses, Abraham, and the Pearl of Great Price, and he was like, ‘These are the great prophets of my religion and I haven’t heard of this book!’ And so I went down to the distribution center and got him a triple combination with his name embossed on it, and he thought that was a really special, precious gift.” But Black isn’t the only comic creator to change lives by living his faith.

When missionaries appeared on his doorstep in 1971, clothes stylist and graphic designer Richard Comely knew nothing of the Church. “To be honest with you, I didn’t even know where Utah was located,” he says. But after hearing the first discussion, Comely asked so many questions, the missionaries taught him three discussions in one day. Within two months, Comely became a devoted member of the Church.

Shortly after his conversion, Comely met fellow Mormon Ron Leishman, who came up with the idea to create a Canadian superhero. From Captain Canuck’s inception, Comely leveraged his fame as a way to spread the gospel. In the first issue of Captain Canuck, Comely wrote of his membership in the Church; in the second, he reprinted and featured an entire article from the Ensign, with permission; in later issues, he published pamphlets from the Church and a letter from Elder Ron Leishman, who was serving a mission in Belgium when Captain Canuck was first published. Shortly after, Comely received a call from a man in the northern U.S. saying he planned to attend the LDS Church in his town.

After Comely showed one of his co-workers, Claude St. Aubin, the Church’s “Man’s Search for Happiness,” St. Aubin declared he would never leave the Catholic faith. “But about six months later, he started to come to Church with us,” Comely says. Not long after, St. Aubin was baptized. 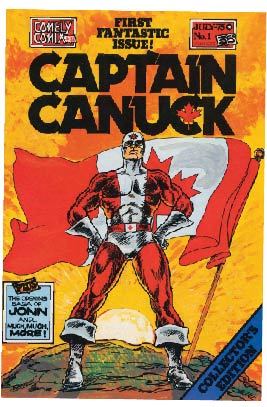 In addition to Captain Canuck, Comely has done illustrations for the Friend magazine, along with popular comic artists Sal Velluto (who has illustrated DC and Marvel heroes from Batman and Captain America to the X-Men, Black Panther, and Aquaman) and Brad Teare (creator of the ’90s alt comics classic, Cypher).

Jake Parker, whose artwork appears in animated movies (Rio, Horton Hears a Who, Epic, Titan A.E., etc.), children’s books, and comics (Rocket Raccoon, Missile Mouse, etc.), has worked with companies from Disney, Warner Brothers Animation, and Big Sky Studios to Marvel and Google. In 1999, Parker also created a now-popular month-long drawing challenge for artists in October called Inktober. Despite his devotion to drawing, Parker chooses to share his faith through a unique medium—YouTube.

“A couple years ago, I started making YouTube videos for artists and creative people to watch and listen to while they work,” Parker says. “A lot of my core values and faith come through in these videos. I’ve received positive feedback about how honest and unapologetic I am about my faith, and how it inspires me to create.” 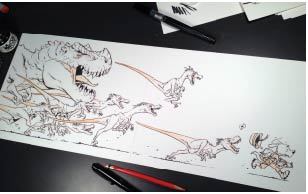 No matter how they share their faith, there’s no doubt faith is central to the way these artists live their lives.

For Lee Allred, the gospel reminds him, “You are not alone. The entire purpose of the gospel is to bind us together—couples, families, ancestors, descendants—in an unbreakable ever-expanding chain linking us not only to our fellow men but to our God.”

“Faith is a very defining element of how I view the world. I could never create The Walking Dead because I don’t view the world through a dark enough lens because I have the light of the gospel in my eyes,” Black adds. “The gospel has given me a lot of optimism and hope on my perspective in the world, and that colors what I write.”

So what draws these inspiring creators to comics? “You get to punch evil right in the kisser,” Lee Allred eloquently puts it.

“The most fulfilling part [about creating comics] is that at their core, these are very moral characters who are representative of values that are deeply held for me. I think in a lot of our society . . . these morals aren’t so clearly presented or accessible for a mainstream audience,” Black says. But for some reason, for superheroes, those morals still hold strong.

In fact, it’s this uplifting quality of comics that has helped their creators through difficult times.

“One of my earliest memories is waking up in a hospital after suffering a concussion and the bed was blanketed with comics my older brother, Lee, had my folks get for me in the gift shop,” Mike Allred shares. “The best medicine!”

And when Black battled Hodgkin’s Lymphoma eight years ago, he says, “it was my faith that helped me have the strength to fight cancer, which in turn freed me up to express myself creatively. And the flipside of that coin is that writing gave me the escape from that fight against cancer.”

The morality and inspiration in comics tie together to teach us simple yet profound eternal truths. “‘Men are, that they might have joy.’ Comics are supposed to be fun. That’s why they’re called comics!” Lee Allred reminds us. He continues, “Evil exists, but more importantly, so does good. Evil may appear to win in the early chapters, maybe even all the way to the final page, but in the end, good triumphs.”