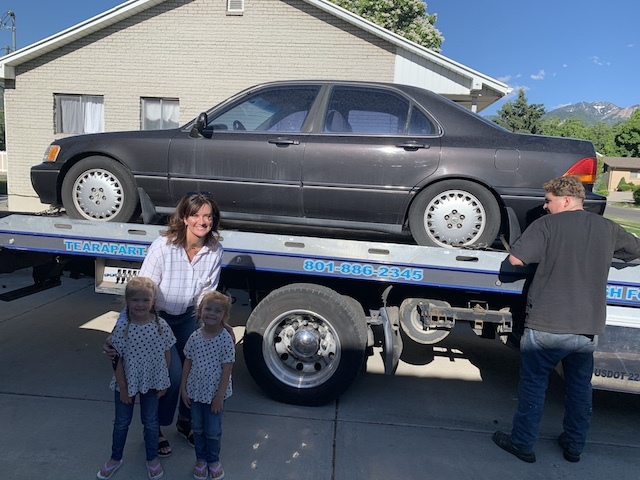 In fact, when she says she's thinking of getting a new car, she really means used car, "Because I don't buy new cars," Brooke says in a This Is the Gospel podcast episode.

But an unfortunate car accident would lead Brooke to another car and a deeper testimony of the Book of Mormon.

Growing up, Brooke says her dad had a fascination with used cars. Not fancy cars. Not nice cars. Not fast cars. Used cars.

"When we would hang out together, he and my mom and I would go out to town and we could cruise the used car lots," Brooke remembers.

And when Brooke's father discovered eBay in the '90s, his used car fascination expanded with the digital age, leading him to buy used cars from all over the country.

But buying and selling used cars wasn't for Brooke. In fact, she was perfectly happy with her clunker Acura that had more than 200,000 miles on it.

Though her classmates dreamed of buying shiny, new cars with their first paycheck, Brooke was content. Brooke says her father's eBay wisdom had served her well, and she had no car payment and no reason to buy another car—until her first day as a therapist following graduation.

While turning left at an intersection, another car ran a red light and T-boned Brooke's car. In an ironic twist of fate, the reliable clunker was totaled.

"So here I found myself needing a new car with the first paycheck that I was going to have as an adult," Brooke says with a laugh.

Turning to eBay, Brooke began looking for a car that was "nothing fancy" and ended up finding a used car in Florida that looked like it would fit the bill.

Following her father's example, Brooke flew to Florida to pick up the car with plans to drive it cross-country back home to Utah. But it was 2005, so Brooke's options were slightly limited when it came to entertainment for the long drive home.

"Of course, I was smart enough to back a huge binder of CDs," Brooke shares. "And I realized very quickly that there were at least 40 hours of driving that I was going to be doing and my CD and music selection was going to get boring, and it definitely did."

However, while flipping through her CD binder, Brooke found audio CDs of the Book of Mormon and Doctrine and Covenants her father had given her before she began graduate school.

Between going to school and working fulltime, Brooke never thought she would have time to listen to the scriptures. However, the sheer boredom that awaited on her 40-hour drive prompted Brooke to listen to these scriptures while she took a detour and visited Church history sites on her way home.

"I think that when I walked up toward Cathridge Jail and, you know, just reading the plaque and the story again, I don't know how to explain it," Brooke says. "It touched me. It hurt a little. It felt like, 'How did I not know about this?' Or, 'How did this even happen to our prophet?' And that was what it really was, is that the Spirit confirmed to me that Joseph Smith was a prophet."

Brooke says that before her trip, she had viewed stories from Church history as "fables come true." She says she knew that early Church history events happened, but the reality and the impact of these stories had never sunk so deep in her mind as it did when she was there walking where early Church leaders had sacrificed so much for the gospel.

Taking in the significance of the hardships early Church members faced, Brooke continued her trip by making a second stop in Independence, Missouri, before continuing on to Liberty Jail.

"All of the sudden, this fire was inside of me, this curiosity," Brooke explains. "I was like, 'Oh, give me all the Church history. Why don't I know about this stuff?'"

While visiting Liberty Jail and having just read the section in the Doctrine and Covenants where Joseph received revelation while in Liberty Jail, Brooke was left alone to contemplate the magnitude of what she had read and what she was experiencing.

"I was sitting there with this piece of history of the Church, but I think even more than that it was just a piece of the puzzle of the Restoration for me, the gospel, what I believed in," Brooke says. "I don't think I ever questioned that Joseph Smith was a prophet, but he was so pivotal to this gospel and that he, being a human, being flawed just like the rest of us, could receive such inspiration and guidance and to set the example so that I could do the same thing."

Sitting in the room alone, Brooke felt the sacrifices of those who had worked to bring the Book of Mormon forth. Her emotions were on the surface as she thought about the verses in the Doctrine Covenants that were centered around the prophet's experience in the cramped prison.

"It was a moment that I will never forget, and I feel so grateful to have that time to just be quiet and to listen and to feel the words of the Book of Mormon, the words of Joeseph Smith," Brook says. "It really is kind of this anchoring point as the years go by and a witness that I feel like I can never deny."

That witness helped Brooke see what she was missing when she got back home from her road trip. She began taking institute classes three or four times a week and studied Church history.

But even now as Brooke continues to study the scriptures and implements the new Come, Follow Me lessons in her family, she sees how pivotal this road trip was for her spiritual growth.

"And I was like, 'Ugh, man, wait a minute. This isn't being spoon-fed to me anymore,'" Brooke says of her learning about the Come, Follow Me program. "And I think that's what that road trip taught me, is that I have to seek after it. I have to go after it. I have to make the time. I have to be present, be open to learning, be quiet. Because I can coast. I can fake it. And if I don't take the time, I won't receive a witness. I won't have that desire, that fire to make my testimony grow unless I'm quiet. Unless I take the time."

Listen to the full episode or read the transcript here. Brooke's story begins at the 1:57 mark.